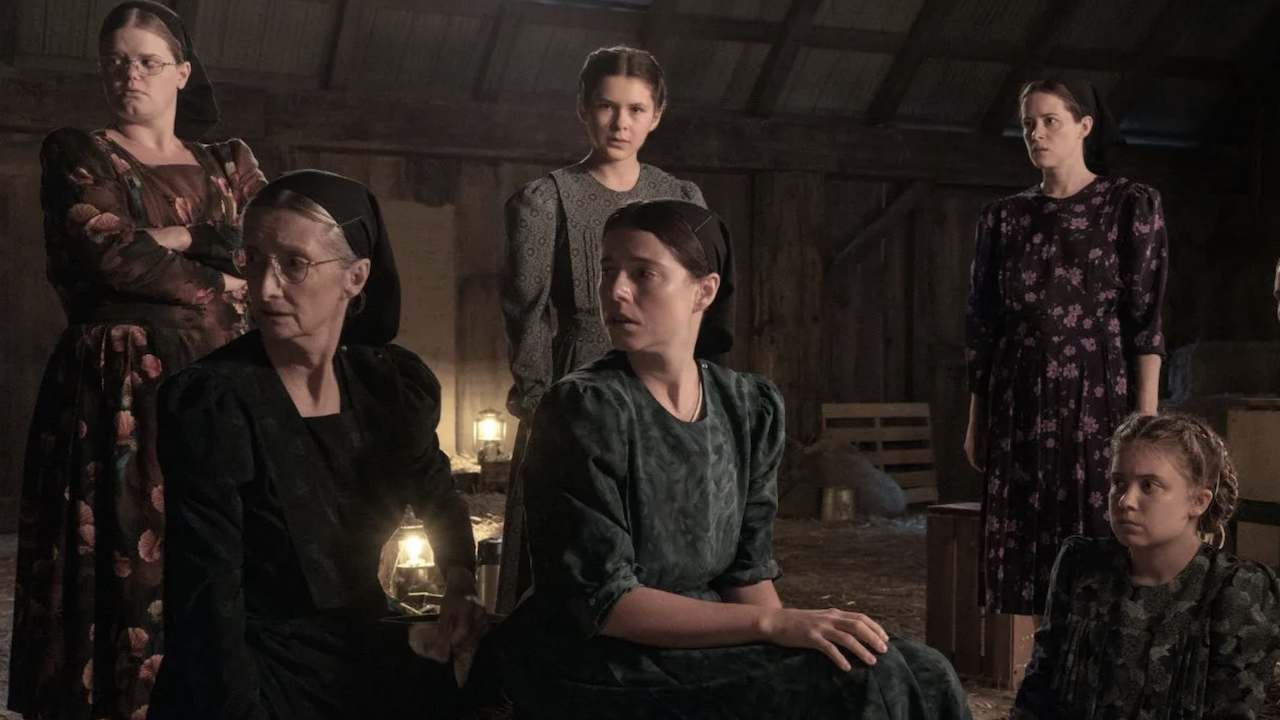 Sarah Polley’s Women Talking will initiate conversations. The design of the film encourages debate, asking questions that might have answers, as well as those to which the answers aren’t so easy. And because Polley’s adaptation of Miriam Toews’ novel of the same name applies to many layers to its discussions, it’s possible to take the dialogue that’s handed to this fiery cast and apply it to problems that are not addressed directly in the movie. But that’s more of a thought experiment for after you have absorbed this deep and introspective period drama. Women Talking screened as part of the 2022 Toronto International Film Festival.

Though it looks like it might take place during the Frontier Age on an American prairie, Women Talking in fact is set in 2010. After the women of a strict (but fictional) Mennonite community start to realize that they are being repeatedly drugged and raped by the male members of the religious sect, they meet in private in a remote hayloft to discuss their options. They believe they have three: Do nothing; stay and fight, or; leave the colony. Each choice comes with its own complications, and the women – all from different generations, with unique skin in the game – argue, analyze and hypothesize over the moral and practical steps that need to come following this horrifying realization.

Women Talking is An Acting Showcase

Sarah Polley continues to draw spectacular, powerful, and richly human performances from her cast members (her 2006 directorial debut Away From Her made the absolute most of her leads, and counts as one of the best films released that decade). The three realistic options presented before the quorum of women are personified by specific actors. Claire Foy’s angry and resentful Salmone wants to stay in the colony and fight the men who have wronged them, even if she knows they likely will fail. Her daughter was raped by one (or more) of the men, prompting Salmoe to attack one suspect with a scythe, leading to an arrest… but little else.

Mariche (Jessie Buckley) leans more toward leaving the colony, primarily because she’s in an abusive relationship with Klaas. And Ona (Rooney Mara) quite often plays Devil’s Advocate, provoking both Salome and Mariche with logical questions that need to be answered should the women come to a majority decision.

These women lose themselves so deeply in their parts once Women Talking starts examining their wounds, especially when these religious women begin to argue the possibility of finding forgiveness for the men who have attacked them. These are deeply religious characters who possess legitimate fear that turning on their men, or refusing to forgive them, will mean that the women spend eternal life in Hell. Not forgiving someone of a crime sounds more serious than the crime itself.

These are extremely complicated issues that Women Talking embraces, and you find yourself switching allegiances and swaying your own opinions based on how affective Mara, Buckley, or Foy might be in a given scene. The latter might be the picture’s MVP, because of the raw fire she injects into her performance. But honestly, the full ensemble is stellar (though in her latest movie the always dependable Frances McDormand doesn’t get as much to do, as she leaves the quorum early and only resurfaces late in the game).

There Are No Easy Answers To Women Talking’s Questions

Sarah Polley’s adaptation is a ferocious analysis of the human condition. It’s overly analytical of the women’s state and status, twisting and bending legitimate moral questions to see if they stand up to scrutiny. One minute, you might be siding with a valid argument for the women to leave this colony. How can they stay when there’s no real protection for them from the fear of attack? But then the women take the conversation one step farther and ask, “What kind of community will we establish once we have left? And who can come? Children? What age? What about the kids we have to leave behind?” These problems need solutions, and they’re not easily unearthed.

The women of Women Talking are fighting for nothing short of the right to exist, for the free will to live in a just society. But before they rush into anything, they are going to debate each possible bump in the road from every direction. Strange as this may seem, the structure and execution of Women Talking called to mind Sidney Lumet’s brilliant adaptation of Reginald Rose’s 12 Angry Men. Both movies take the necessary steps to prove how complicated it can be for various personalities to reach a fair consensus. But where Lumet’s protagonists argued on behalf of an accused murderer, Polley’s conflicted women are fighting for the right to, the need to, and the desire to evolve, to better their living situation, and to not fall victim to the status quo. Powerful stuff, indeed.

2023 Audi SQ8 TFSI up for grabs in latest fundraising raffle