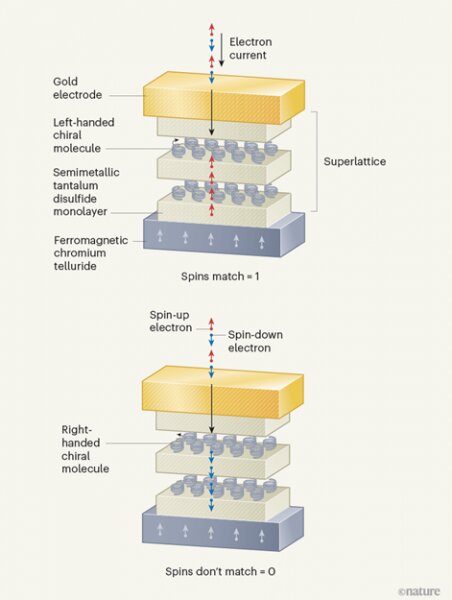 Chirality describes a molecule that can’t be superimposed on its own mirror image. Two geometrically different chiral molecules of the same formula, distinguished by the R- and S- configuration, exhibit different optical properties. More intriguingly, a material block made of the same chiral molecules can function like a security gate when electrons swarm through, only granting access to electrons with the same spin identity. That is, electrons in spin up state will make their way through the chiral molecules that favors spin up state, while electrons in the spin down state will get blocked and deflected, or vice versa. This intrinsic filtering effect known as chiral-induced spin selectivity (CISS) is of great interest for quantum information processing, where information is stored as spin charge.

In this research published in Nature, researchers in Duan’s group designed a spin tunneling junction made of chiral molecular intercalation superlattices (CMIS), a structure that brings out the best of CISS.

A spin tunneling junction is a spin filter that researchers assemble to evaluate CISS and the performance of their chosen chiral material. The basic setup includes a metal electrode to conduct electricity, a ferromagnetic material that selectively controls the incoming current to be only in 1 spin state: either spin up or spin down. A block of chiral superlattice is sandwiched in between, of what design is the research ground for many.

Traditionally, the filter structure is made from self-assembled molecular layers, which have chiral molecules (the “studs” in figure 1) spin coat directly onto the ferromagnetic material. The resulting quality is largely degraded by defects known as pinholes, which let opposite spin slip pass. Pinholes permeate as the number of studs increases, which limits the reach of maximal spin selectivity.

Given the case, Duan’s group takes an innovative approach to make chiral molecular intercalation superlattices (CMIS) as the filter instead. Different from the traditional structure, a superlattice is a high order, periodic structure made of alternating layers of multiple materials. For their CMIS, the team has either a left handed R-α-methylbenzylamine (R-MBA) or the right handed S-α-methylbenzylamine (S-MBA) inserted in between the host layer of tantalum disulfide (TaS2) sheet, a synthetic process known as intercalation.

“The superlattice works like stacking lego bricks on each other to make a multi-stage filter, this structure brings its spin selectivity to the next level,” co-author Dr. Huaying Ren said. “It greatly minimize pinholes through the 2D protection layer.”

Such a device creates an unprecedented plot of current vs. magnetic field that marks the breakage in electron filtering limit (Figure 2).

In Figure 2a, the superlattice is made of chiral molecule R-MBA intercalated into H- phase TaS2. During the field sweep scan, when the magnetic field is greater than the coercive field of the Cr3Te4, the out-of-plane ferromagnetic ordering in Cr3Te4 switches abruptly, causing an abrupt change of the spin polarization and, thus, an abrupt change in the tunneling probability through the CMIS, resulting two extreme current states. Similar but opposite behavior is also observed when S-MBA chiral molecule was used as the chiral molecule.

By calculating the spin polarization ratio, the ratio between the two extreme currents and a key criteria to evaluate the performance of the device, 63% is reached. Considering the traditional approach can only reach a ratio of single digit, the current work is remarkably among the highest spin selectivity achieved.

“The performance is highly specific to the materials we used, our next plan is to explore other possible chiral materials, 2D host material, and ferromagnet with further improved performance to enable practical applications,” co-author Dr. Qi Qian said.

Google brings back the timer feature for its Search engine