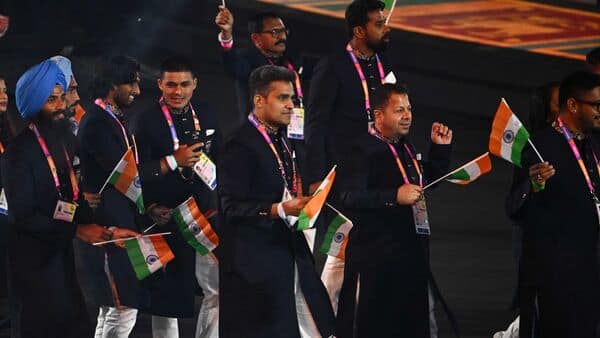 The much awaited 22nd Commonwealth Games, 2022 (CWG 2022) commenced on Thursday with a gripping opening ceremony at the Alexander Stadium in Birmingham.

The Queen’s baton completed all territories during its journey to Birmingham, despite the restrictions due to Covid-19.

The 10m high raging bull, which took five months to be ready, is pulled along by female chain-makers. It was a symbolic gesture towards the women of the 19th century who worked long hours in hot and cramped conditions making chains with meager incomes. It also led to a strike for better working conditions.

Prince Charles declared the CWG 2022 open on behalf of the Queen and brought a gripping Opening Ceremony to a stirring end.

Three colors of the game- red, yellow, and blue depict the values of Humanity, Destiny, and Equality. At the end of the ceremony, six medalists brought the ceremonial flag of CWG 2022.

India will be represented by 215 athletes who will participate in 141 events across 19 sports.

Around 5000 athletes will go against each other in Birmingham for 1875 medals up for winning across multiple sporting events. This edition of CWG 2022 is also special because for the first time ever in global, multi-sport event, women events will outnumber men.

In the 2018 edition of Commonwealth Games, India won 66 medals. However, it was the 2010 edition of CWG when India gave a spectacular performance winning 101 medals, out of which 38 were gold medals.

With Inputs from ANI

Denial of responsibility! My droll is an automatic aggregator of the all world’s media. In each content, the hyperlink to the primary source is specified. All trademarks belong to their rightful owners, all materials to their authors. If you are the owner of the content and do not want us to publish your materials, please contact us by email – [email protected]. The content will be deleted within 24 hours.
BirminghamCommonwealth gameCommonwealth GamesCWG 2022manpreet singhneeraj choprapv sindhu
0
Share