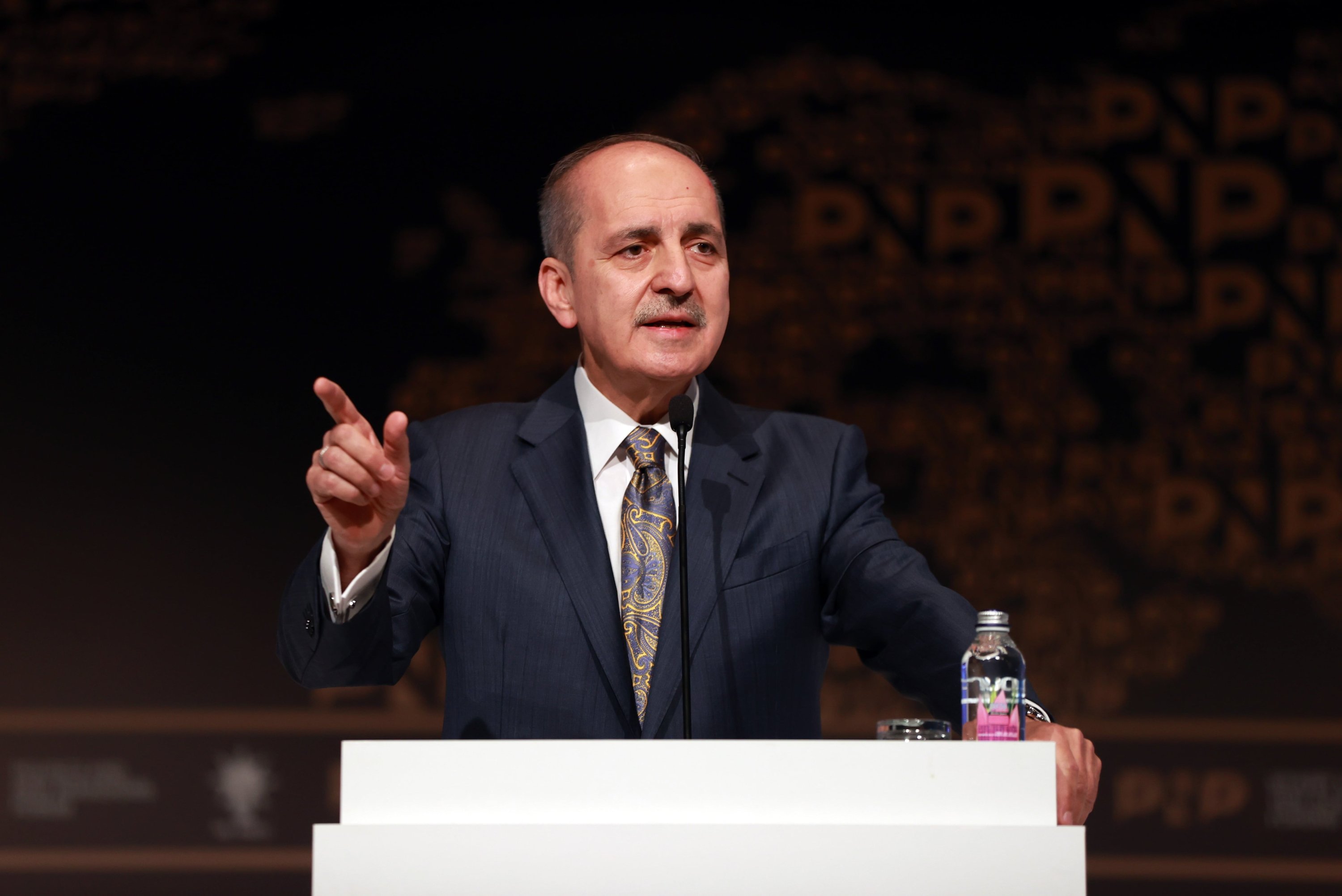 The “Century of Türkiye” vision will provide hope not only for Türkiye but also for the world, ruling Justice and Development Party (AK Party) Deputy Chair Numan Kurtulmuş told Daily Sabah in an exclusive interview in Istanbul.

“In the next 100 years, a strong Türkiye will lead the world. This is one of the main goals of the ‘Century of Türkiye.’ It will be a hope not only for Türkiye but also for the world, so that a fairer, more equitable and more peaceful global system can be established economically and politically,” Kurtulmuş said.

Evaluating the “Century of Türkiye” vision, which was recently announced by President Recep Tayyip Erdoğan and aims for a stronger Türkiye, Kurtulmuş underlined that it is imperative for nations with great potential to have big goals. “Over the years, in line with the vision of ‘A Strong Türkiye Again,’ our target was actually to strengthen Türkiye in every field, such as its economy, foreign policy, social integration, production, education and culture. In the last 20 years, we have prepared the infrastructure of the ‘Century of Türkiye’ vision,” he explained.

Noting that they aim to make the vision of the “Century of Türkiye” the common national goal of 85 million people, Kurtulmuş stressed that Türkiye’s power in every field will be noticed by the whole world in the next 100 years and that the country will become a playmaker in the international arena.

With seven months left for the 2023 elections, Kurtulmuş was asked how the AK Party was preparing for this process, and he emphasized that they were always ready, not just because the election was approaching.

Stating that the AK Party has reached 11.5 million members in Türkiye, Kurtulmuş added that this number is higher than the total number of members of all other parties put together. He also emphasized that members of the AK Party have visited every city in the country, especially President Erdoğan, and spoke to citizens about the vision of the “Century of Türkiye.”

“President Erdoğan points out the services he provides to the public at the openings he attends in the cities he visits. As the party management, we continue our work with high motivation,” Kurtulmuş highlighted.

Stating that the AK Party’s popularity among voters was on the rise in the polls as of August, Kurtulmuş said that the AK Party has managed to reach large sections of the public with its positive agenda. In addition, he emphasized that positive events such as the launch of the “Century of Türkiye” and the opening of Togg’s factory in Gemlik, Türkiye’s first domestic automobile, received widespread approval from the citizens.

“It is obvious that if we continue our positive agenda. It will result in the victory of our President Erdoğan and the AK Party in 2023,” Kurtulmuş emphasized.

When Kurtulmuş was asked his opinion about the “table for six,” a coalition of opposition parties, that still hasn’t announced their candidate for the 2023 elections, Kurtulmuş said that the candidate issue was secondary, but the main issue would be what the main political agenda of the coalition would be.

“For example, we saw in Parliament that the ‘table for six’ is not allied on the Libyan bill. While the Republican People’s Party (CHP), said no, the Good Party (IP) said yes,” Kurtulmuş stressed.

Reiterating that the “table for the six” could not come to a conclusion even though it held meetings constantly, Kurtulmuş said: “Democracy is a race. Our candidate is Recep Tayyip Erdoğan. However, it is still unclear what the opposition will do. It seems that it is difficult for them to announce the candidates before the last day.”

In addition, Kurtulmuş emphasized that CHP leader Kemal Kılıçdaroğlu played an important role in bringing the “table for six” up to date, saying, “Even if he doesn’t say it openly, it is clear that Kılıçdaroğlu wants to be president.”

Besides, Kurtulmuş stated that the AK Party will carry out an election policy that will include all segments of the public during the election period, adding that the opening of the Alevi-Bektashi Culture and the newly opened Cemevi Presidency to solve the problems of Alevi citizens and the invitation of opposition journalists to the launch of Togg and the “Century of Türkiye” are examples of the inclusive campaign.

“It is in the national interests of Türkiye to enter a more inclusive, democratic and reformist process again. We are striving for that too. Our campaign will continue to progress in this context in the elections as well,” he added.

In the context of the constitutional amendment for the headscarf, which has been on Türkiye’s agenda recently, the AK Party delegation held meetings with all parties in Parliament on this issue. When Kurtulmuş was asked about the latest developments regarding this issue, he stated that Kılıçdaroğlu brought this issue up again when it was not on Türkiye’s agenda. However, he said that in this direction, they proposed a constitutional amendment so that the headscarf issue would not be on the agenda of the country ever again and that they were negotiating with the parties in this direction.

“Since the main opposition party, CHP, saw the need for a legal regulation, let’s make the constitutional amendment together and eliminate the headscarf issue as a political discussion,” Kurtulmuş said.

Stating that they intend to resolve the headscarf issue through negotiations without a referendum, Kurtulmuş said that if they are successful in this regard, it will be the joint success of Parliament.

“If this issue is finally resolved without going to a referendum, it will be the joint success of all political parties, namely the 27th Parliament,” he emphasized.

On the other hand, Kurtulmuş drew attention to Türkiye’s mediation role in the Russia-Ukraine war: “The principle is clear in the war between Russia and Ukraine. Both are our neighbors, both are our friends. We do not take sides. We can talk to both Russia and Ukraine. While no country was a mediator in the Ukraine-Russia war, President Erdoğan demonstrated an example of humanitarian diplomacy as the only leader who met with the leaders of both countries. Türkiye has proven to be both a regional and a global power with its role in the grain corridor and prisoner exchange.

Most recently, Türkiye enabled a prisoner swap between the warring countries. Also, Turkish mediation proved vital in facilitating the signing of a deal between Türkiye, the United Nations, Russia and Ukraine in Istanbul to reopen certain Ukrainian ports to release grain that had been stuck for months because of the ongoing Russia-Ukraine war – a development that has been crucial in responding to a growing global food crisis.

Türkiye is one of the most active countries working to ensure a permanent cease-fire between Ukraine and Russia. Its delicately balanced act of assuming a role as a mediator by keeping communication channels with both warring sides open provides a glimmer of hope in diplomatic efforts to find a solution and achieve peace in the Ukraine crisis. With its unique position of having friendly relations with both Russia and Ukraine, Türkiye has won widespread praise for its push to end the war.

Since the beginning of the conflict, Ankara has offered to mediate between the two sides and host peace talks, underlining its support for Ukraine’s territorial integrity and sovereignty. While Ankara has opposed international sanctions designed to isolate Moscow, it also closed its straits to prevent some Russian vessels from crossing through them.

Finally, Kurtulmuş condemned the terrorist attack that killed six people on Istiklal Street in Istanbul on Nov. 13 and drew attention to Türkiye’s fight against terrorism, which has been going on for years. “I am very sorry for our citizens who lost their lives in the treacherous attack. Türkiye has spent nearly 40 years fighting terrorism and has lost many of its citizens. One of the things we have learned in our fight against terrorism is that no terrorist organization alone means anything.”

Stating that there are countries that support terrorist organizations and Türkiye is aware of this, Kurtulmuş said, “I can clearly say that if some states in the world stop supporting terrorism, there will be no terrorists anywhere in the world within a week.”

Microsoft debuts an ‘ugly’ Clippy sweater in time for the holidays

Best Wall Clocks For Your Office or Business