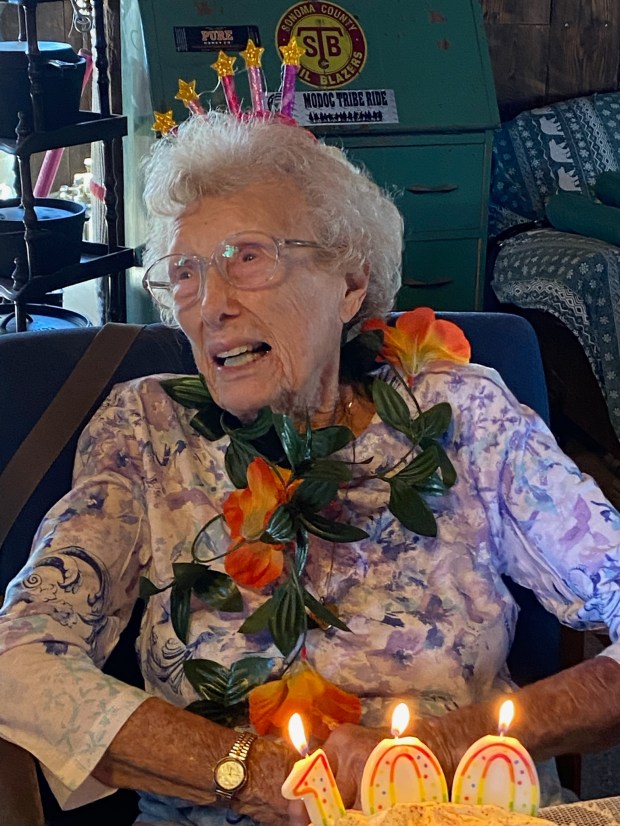 ORLAND — Centenarian and Orland resident Erna Ozment Garton said her secret to living to the age of 100 has been looking after her health.

Garton turned 100 in early August and has been busy celebrating with several parties thrown by family members. Garton grew up in Sumpterville, Alabama, and had 16 brothers and sisters. Her father had a farming operation. Garton’s parents were from the south originally. Her father worked for a cattle company in Texas. Garton did lots of chores growing up, such as making lunches, which taught her her strong work ethic.

“The Marine Corps was a different time, everyone left college and joined the service,” Erna Garton said. “Everyone looked out for everyone else.”

After she was discharged she met her husband, Edward Elmer Garton, who was a Marine pilot. They married in Atlanta, Georgia and moved to California in 1945 so Edward Garton could attend Chico State.

“It doesn’t matter if you believe in the same things, you have to believe in each other,” Erna Garton said about the secret to a long marriage.

Erna Garton has four grandchildren and seven great-grandchildren. Oz Garton lives in Moscow, Idaho and Ficher lives in Orland. The Gartons had a dairy business in Orland and Tillamook, Oregon which Ficher worked for. Ficher grew up in Orland and went to school there.

Erna Garton worked at a former flower shop, Dunwoodies, in Chico on the Esplanade which started her lifelong love of flowers and flower arranging.

Erna Garton worked at Dunwoodies for two years and learned how to make wedding bouquets, among other things. She belongs to the Baptist church in Orland and did flower arranging for the church. She worked as a flower show judge after receiving two and a half years of schooling to become a judge. After the flower education is over, students must pass a test to become a judge. This certification has to be renewed every few years.

Two of Erna Garton’s granddaughters followed in her footsteps and became interested in flowers. One of them, Jodi Garton McClory, grows flowers to sell at the farmers market in Moscow, Idaho and also completes flower arranging for weddings. The other, Hassie Ficher, works for Green Thumb Nursery in San Marcos.

When asked which flowers she liked best, Garton said, “I like all flowers.” Garton has judged flower shows in Eureka, Gridley, Oregon and Sacramento, for example. She traveled to Texas in 1996 to receive a prestigious award for Flower Arranger of the Year.

Oz Garton lived in South Africa for a year after receiving a Fulbright scholarship and Erna Garton visited him there. They were able to go on a safari. She is an experienced traveler and has visited Africa, Malaysia, Europe, Mexico, Honduras and Canada. Erna Garton also went on a flower tour in Australia and New Zealand.

She has also spent a long time working on the geneology of her family. Ficher said someone in her family is related to Richard the Great.

“Mom did all of that research that before computers,” Ficher said.

Garton also volunteered for the Cub Scouts and Brownies and was a Girl Scout leader. She also was a youth leader for the Baptist church.

“I’m a firm believer in helping out schools,” she said.

She also said gardening is a secret to a good life as well.

She said her generation thought more about community.  She is most proud of flower arranging and has a passion for flowers.

“It always made me happy,” Garton said.

Erna Garton’s senior womens’ group in Orland wrote a book about the history of Capay. They interviewed older folks about it. When Erna and Edward Garton celebrated their 50th wedding anniversary Erna Garton rounded up everyone to go to San Francisco to see the play “Phantom of the Opera.”

The best advice Garton ever received was “to get the job done.”

Ubisoft thinks you should pay $120 for Far Cry 6 GOTY…