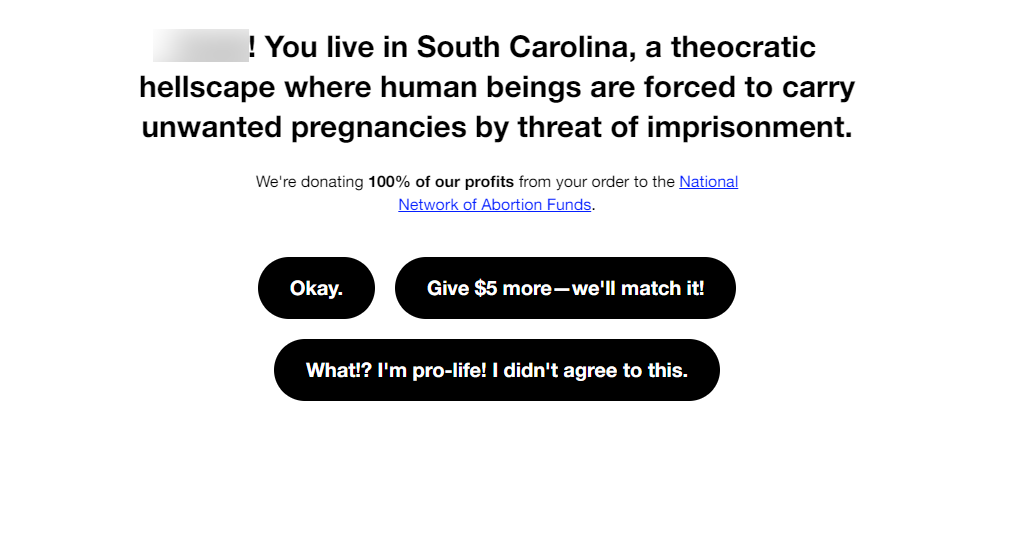 MYRTLE BEACH, S.C. (WBTW) — As part of a campaign dubbed “Your State Sucks,” popular party game Cards Against Humanity says it is donating 100% of its profits from orders placed in 22 states to the National Network of Abortion Funds.

On its website, Cards Against Humanity said all of its profits from these 22 “nightmare-states” will be donated to the National Network of Abortion Funds, which distributes money to local groups focused on helping those who can’t afford an abortion to obtain one.

People in the same 22 states who place an order will be greeted with a message like the one seen below, which reads “****! You live in South Carolina, a theocratic hellscape where human beings are forced to carry unwanted pregnancies by threat of imprisonment.”

Under the message, buyers can either acknowledge the message or chip in an extra $5, which the company will match. There’s also a third option that states “What!? I’m pro-life! I didn’t agree to this.”

Buyers who click that button are greeted with a second message that reads “So you don’t want us using your money to pay for abortions? You know, sometimes people have values imposed upon them by bigger, more powerful entities, and they are forced to do things they don’t want to do, like carry an unwanted pregnancy. For example, we just added an extra $5 donation to the National Network of Abortion Funds to your cart.”

If you don’t live in one of these states, you still have the option to make a $5 donation while making a purchase on Cards Against Humanity’s website, which the company says it will match.

Cards Against Humanity is a popular party game in which players play cards in order to make jokes, often crude and vulgar.

Get a New Desk Chair Up To 60% Off at Staples