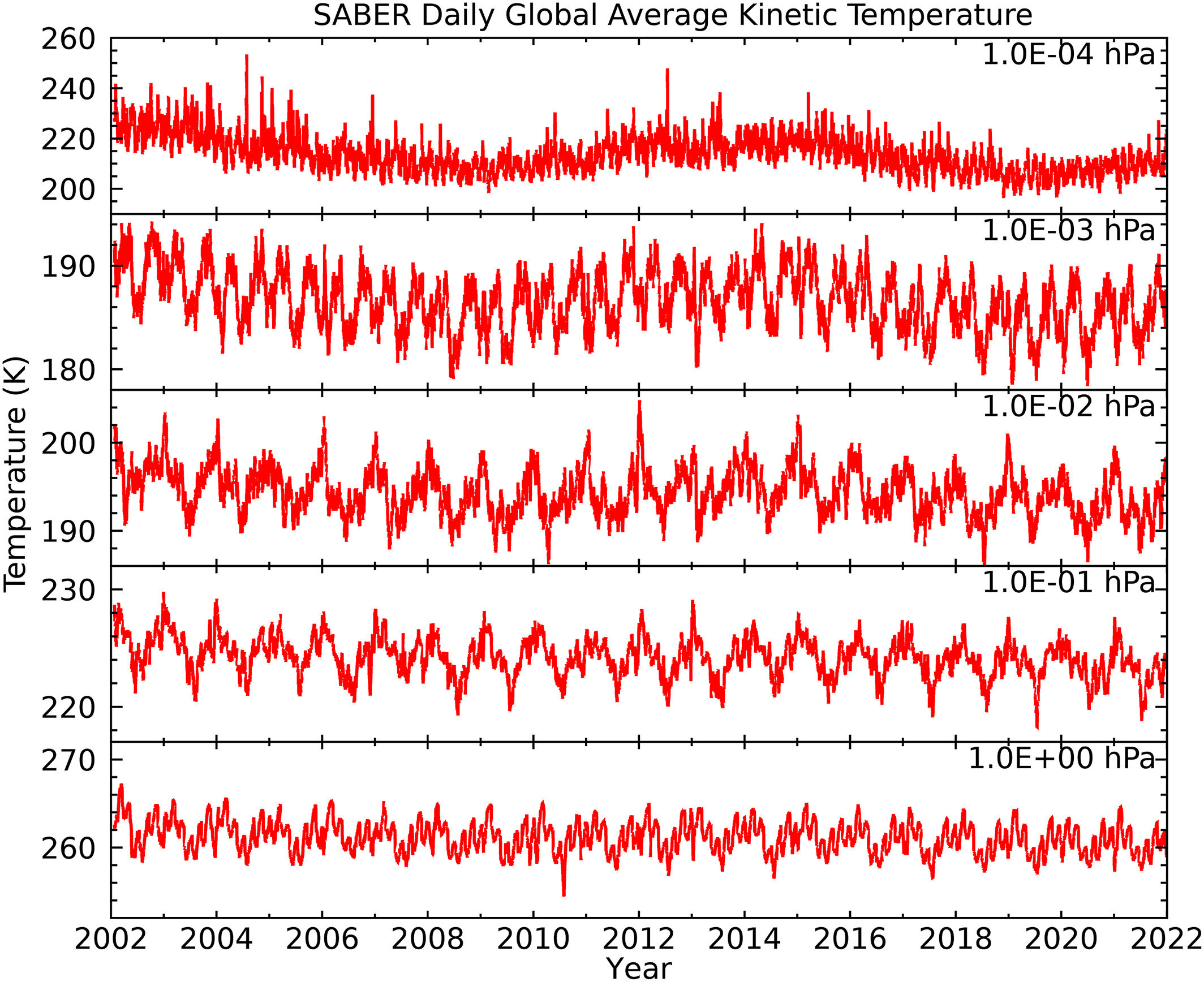 Near Earth’s surface, increasing concentrations of carbon dioxide in the atmosphere are causing temperatures to rise. But starting around 60 kilometers (37 miles) up, in the outermost layers of atmosphere called the mesosphere and lower thermosphere (MLT) carbon dioxide actually cools the atmosphere, causing it to shrink and contract. That cooling and contracting process has been hypothesized for over three decades. Now, new research reveals the first evidence that globally, upper atmospheric shrinking has begun.

A new study uses satellite-derived pressure and temperature data to show the MLT has contracted by over 1.3 kilometers (0.8 miles) between 2002 and 2019. About 340 meters (1,115 feet) of that shrinking is due to carbon dioxide, and that contraction is likely permanent, according to the researchers.

The remainder of the contraction is due to a decline in solar activity during that time. The study was published in the Journal of Geophysical Research: Atmospheres, which publishes research advancing the understanding of Earth’s atmosphere and its interaction with other components of the Earth system.

A cooling and shrinking MLT will lead to an increase in the longevity of space debris at higher altitudes, including the upper thermosphere, which poses risks to the International Space Station and other low-Earth orbit space objects. Tens of thousands of known bits of space debris, from natural meteroids to human-made technological junk, are currently orbiting the Earth.

Over time, most debris descends and falls out of orbit. Models in a paper published earlier in Geophysical Research Letters predicted cooling in the thermosphere would result in about a 33% decrease in drag and 30% longer lifetimes for space debris by 2070.

“One consequence is satellites will stay up longer, which is great, because people want their satellites to stay up. But debris will also stay up longer and likely increase the probability that satellites and other valuable space objects will need to adjust their path to avoid collisions,” said Martin Mlynczak, the lead author of the Journal of Geophysical Research: Atmospheres study and a geospace scientist at NASA’s Langley Research Center. Longer-lasting debris could increase costs of space insurance and be a major consideration in future space law and policy decisions, he added.

The thermosphere is the highest layer of the atmosphere before what many people likely think of as “space,” or the exosphere. It is defined by atmospheric pressure, but generally extends from altitudes of about 80 to 90 kilometers (50 to 60 miles) to between 500 and 1,000 kilometers (300 to 600 miles).

Unlike the atmosphere close to Earth’s surface, the thermosphere is composed primarily of oxygen and nitrogen. Most of the Sun’s incoming UV radiation is absorbed by oxygen, heating up the thermosphere and causing it to expand. The heating varies from one solar cycle to the next and plays an important role in setting the thermosphere’s temperature and shrinking or swelling.

Carbon dioxide concentrations in the mesosphere and thermosphere have increased in step with concentrations at Earth’s surface. Scientists predicted in the 1980s that cooling and contracting would happen, but the new study is the first to demonstrate global observations of the contraction.

“There’s been a lot of interest in seeing if we can actually observe this cooling and shrinking effect on the atmosphere,” said Mlynczak. “We finally present those observations in this paper. We’re the first to show the shrinking of the atmosphere like this, on a global basis.”

As the thermosphere cools, it contracts and results in lower density. Because of this, a satellite at a given altitude in the thermosphere is now experiencing relatively less dense air, and therefore less drag, than before additional carbon dioxide was added.

The new JGR: Atmospheres study used temperature and pressure data from NASA’s TIMED satellite (on the 21st year of what was originally a two-year mission) to look for the predicted cooling and contracting patterns. The researchers found the highest altitude of the mesosphere and lower thermosphere has cooled by as much as 1.7 degrees Celsius (35 degrees Fahrenheit) and contracted by over a kilometer between 2002 and 2019.

The latest solar cycle has been weak, allowing the researchers to separate the effects of carbon dioxide and solar radiation on atmospheric temperatures. At the highest altitudes in the MLT, the weaker solar cycle over the past 20 years is responsible for most of the observed cooling, adding to the cooling from increasing carbon dioxide.

“At every altitude, there is a cooling and a contraction that we attribute in part to increasing carbon dioxide,” said Mlynczak. “As long as carbon dioxide increases at about the same rate, we can expect these rates of temperature change to stay about constant too, at about half a degree Kelvin [of cooling] per decade.”

Twitter Blue Team’s Alleged Departures May Cause Another Delay