Captain Freedom in the Rebooted Speed Comics #13, Up for Auction 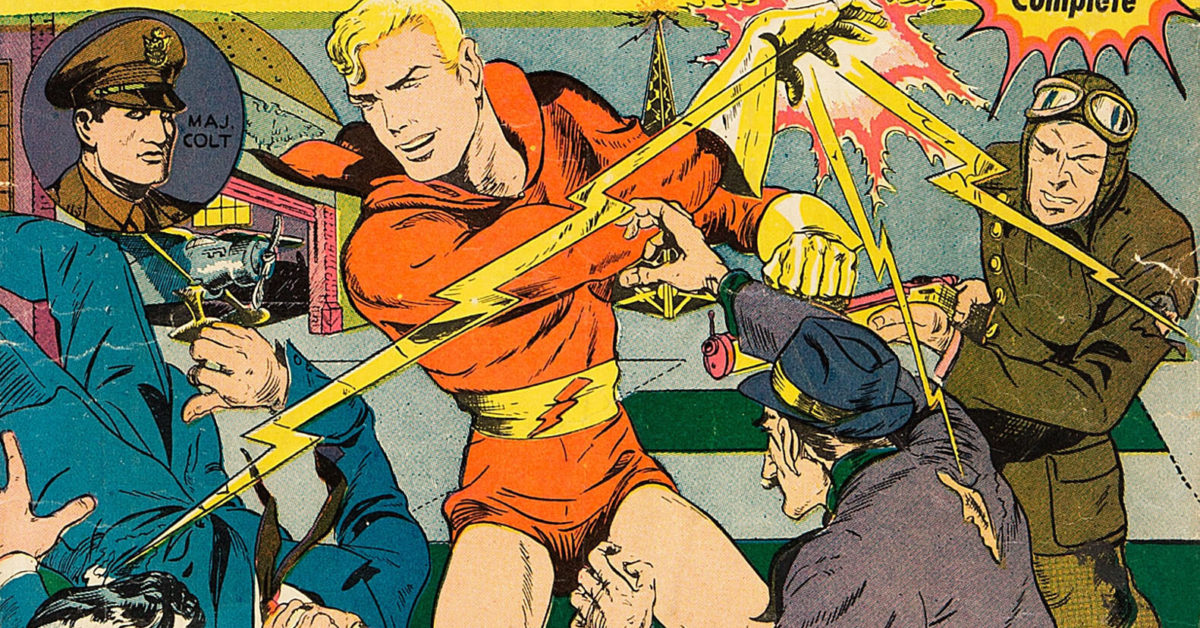 After publishing eleven issues of the title, Frank Z. Temerson‘s and Isaac W. Ullman‘s Brookwood Publishing sold Speed Comics to publisher Leo Greenwald.  Greenwald along with another little-known figure, artist Worth Carnahan, had been publishing Champion Comics (later renamed to Champ Comics) since late 1939.  Greenwald’s association with Speed Comics would be brief. While he held onto Champ Comics until early 1942, for as-yet unknown reasons, he published the title for just two issues of Speed Comics before passing the title along to Alfred Harvey in mid-1941.  But those two issues would be memorable, and perhaps most importantly Speed Comics #13 would introduce the patriotic superhero Captain Freedom. There’s a Speed Comics #13 (1941) Condition: GD and a bunch of other issues of Speed Comics up for auction in the 2022 August 28-29 Sunday & Monday Comic Books Select Auction #122235 at Heritage Auctions.

Little is known about Leo Greenwald outside his association with distributor PDC. He was described as something of a dilettante by legendary creator Joe Simon, who said, “There was a guy named Leo Greenwald whose wife was alleged to be wealthy. She didn’t want him hanging around the house, so it was rumored that she bought him an office in a new blue building at Lexington Avenue and 42nd Street, a short distance from the Fox offices. ‘Go put out a comic book,’ she told him, and he did.”

But Greenwald’s brief association with Speed Comics seems pretty hands-on and savvy.  In issue #12, he made an obvious reboot to Shock Gibson, the Human Dynamo, by giving him a new costume and expanded electricity-based powers, bringing his abilities more into alignment with his name.  He also introduced an interesting masked mystery man espionage character named the Wasp that issue.  In issue #13, he introduced Captain Freedom, a character who would go on to become a mainstay of the title under Harvey.

Nearly forgotten by comics history, Leo Greenwald had a brief but noteworthy impact on the early Golden Age, and you can see a part of that with Speed Comics #13 (1941) Condition: GD.  There’s also a bunch of other issues of Speed Comics up for auction in the 2022 August 28-29 Sunday & Monday Comic Books Select Auction #122235 at Heritage Auctions. If you’ve never bid at Heritage Auctions before, you can get further information, you can check out their FAQ on the bidding process and related matters.

‘Valorant’ will be getting an updated Fracture map “soon”