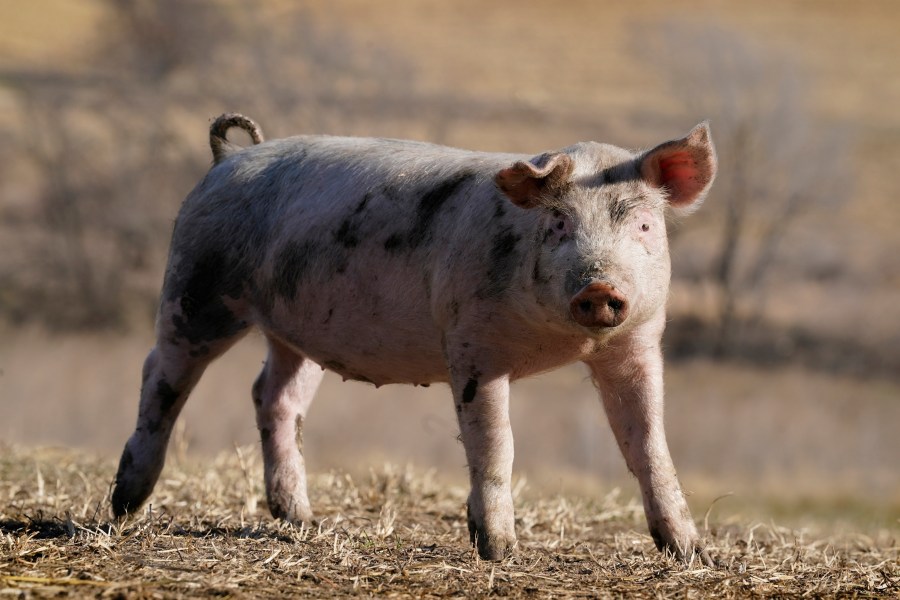 DES MOINES, Iowa (AP) — Ohio hog farmer Joe Brandt changed his operation a few years ago to give his pigs more room and keep pregnant sows out of the narrow crates used by most farms.

Brandt said he wanted to treat his pigs more humanely, but in doing so he also created a niche for his family business amid heightened concerns about the treatment of animals, and that enabled him to charge higher prices for the pigs.

That payoff seemed likely to grow even larger after the January 2022 implementation of a California ballot measure that required all pork sold in the state to abide by the standards Brandt had already implemented but that are rarely seen in large hog farms. With that measure, Brandt and farmers like him would suddenly be the only sources of bacon and pork chops for a state of 39 million people that consumes about 13% of the nation’s pork supply.

Yet, for reasons out of Brandt’s control, it hasn’t happened. California has yet to fully write and approve the necessary regulations, a state judge has blocked enforcement of the law because of that regulatory delay, and the U.S. Supreme Court will soon hear a case brought by a national pork industry group that opposes the regulations. Given all the delays, Brandt wonders if he will ever see the surge in demand he expected when the measure was overwhelmingly approved by California voters in 2018.

“It absolutely would help,” said Brandt, who maintains a herd of about 1,500 sows at his farm near Versailles, Ohio. “It comes down to positioning yourself. If you see something and you’re progressive and you work toward it and you believe in it, I think if a measure like this does pass, you should be rewarded for it.”

Brandt is among hundreds of relatively small farmers who are caught between the state of California and the Iowa-based National Pork Producers Council, which represents the nation’s largest pig operations, based primarily in the Midwest and North Carolina.

At issue is whether California’s Proposition 12 violates the U.S. Constitution by interfering with a national system in which about 65,000 farmers raise 125 million hogs annually, resulting in gross sales of $26 billion. California’s regulations would ban pork sales in the state unless the pigs were born to sows with at least 24-square-feet of space and an ability to turn around.

The National Pork Producers Council and American Farm Bureau Federation argue that California’s law violates the Constitution’s commerce clause because it throws a wrench in the nation’s pork system and requires out-of-state producers to incur nearly all the costs of compliance.

After losing before the Ninth Circuit Court of Appeals, the national associations asked the U.S. Supreme Court to consider their case. Arguments are planned for October.

If the Supreme Court finds California’s law unconstitutional, it couldn’t be fully implemented and the nation’s pork producers would be free to continue their current operations, including the use of so-called gestation crates that protect sows from other pigs but prevent them from turning around. Other aspects of the California law — governing the treatment of egg-laying chickens and cattle raised for veal — could be enforced.

A judge on Aug. 11 placed a similar sow welfare law on hold in Massachusetts, pending the outcome of the Supreme Court case.

Jared Schilling, who raises about 40,000 sows a year near New Athens, Illinois, said his family hoped to gain a competitive edge when they changed their operation to give pigs more room. The move has paid off; he gets premium prices by selling his animals to specialty pork business Coleman Natural Foods. Brandt also sells to Coleman.

But Schilling said his profits would likely rise more if the California and Massachusetts laws are implemented.

“Every industry has to make changes to adapt to what the consumer wants, whether it’s the marketplace or legislation,” Schilling said. “Most would prefer the marketplace but they did vote on it, so someone needs to meet that consumer demand.”

Michael Formica, a lawyer for the National Pork Producers Council, said his group also represents small hog farmers and has no desire to place their needs secondary to large pork producers. Formica argued that the current system already rewards producers who meet what he estimated was the 5% of consumers who want to pay significantly more for pork raised with more square footage and without crates.

What the council opposes, Formica said, is California imposing its standards on the rest of the country, especially since the state produces less than 1% of the pork its residents consume.

If California’s law is allowed to take effect, Formica said, smaller producers could be hurt because once large suppliers shift to meet the rules, they would eventually be able to produce the same pork at a lower cost than the niche farms.

Charlie Thieriot, chief executive officer of Llano Seco Meats in Chico, California, said his business exceeds the California rules, and he strongly supports Proposition 12, calling its requirements the “tip of the iceberg” for how pigs should be treated. But Thieriot, whose business supplies a number of elite Bay Area restaurants, said national pork producers are adept at operating on thin margins, and he worries that small pig farmers don’t realize the struggle they could face competing directly with big companies if they are forced to became Proposition 12 compliant.

“I think these big producers are really just incredibly smart, incredibly strategic,” Thieriot said. “They will be getting ready for whatever the court decides and they’ll have a Prop 12 compliant product ready when that hammer drops.”

How ‘House of the Dragon’ is different from George R.R. Martin’s ‘Fire and Blood’