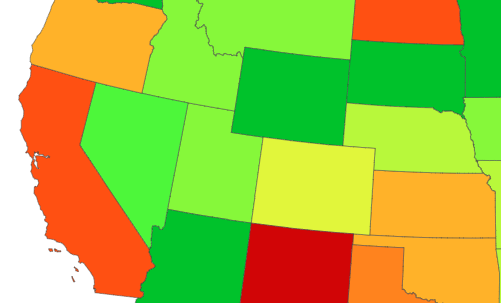 California is among the states being hit hardest by flu, according to the most recent data, but its numbers have improved steadily since Thanksgiving.

The Centers for Disease Control report for the week ending Jan. 14 puts four states in the range of high flu activity: New Mexico, California, North Dakota and Texas. The District of Columbia and New York City are also in that category.

California had been in the “very high” category from mid-November until the end of December. The slider bar at the top of the interactive map above allows display of the map since the start of October.

The CDC data is drawn from reports of “influenza-like illness” — respiratory illness that includes fever plus a cough or sore throat.

In the two weeks since the year-end holidays, flu activity has avoided the increase that many public health experts had warned about. The first wave of the season swept through the country weeks earlier than usual and peaked before Christmas.

“It’s pretty clear that there was a peak of activity, but that doesn’t mean we won’t have another one,” said Lynnette Brammer, lead of the CDC’s domestic influenza surveillance team. “Things could turn around and go back up.”

She characterized the season’s flu activity so far as in “the mid- to higher range.”

“Basically, this is looking like a typical flu season, except in terms of the timing,” Brammer said. “It was just a little bit earlier than normal.”

Advance Wars 1+2: Re-Boot Camp will be released in April