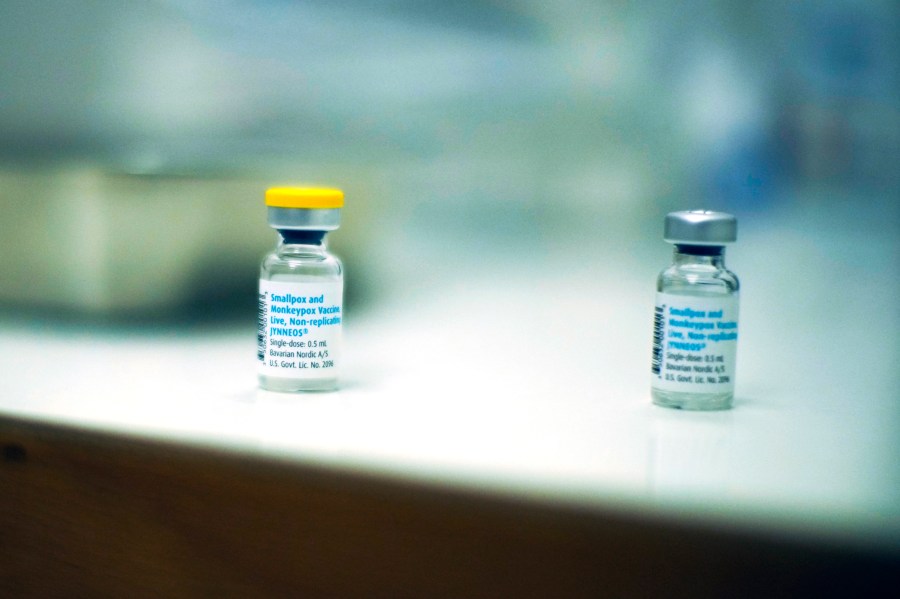 SAN FRANCISCO (KRON) – As San Francisco health officials consider the use of a different vaccine to vaccinate people at risk of monkeypox, the California Department of Public Health confirmed to KRON4 that it has ordered 200 doses of the older jab — but declined to say why.

The news comes amid shortages of the Jynneos vaccine currently being used to fight the outbreak, which can only be produced by the Danish company Bavarian Nordic. It also comes after a scathing report in the New York Times alleged that there will be Jynneos shortages for the next few months because of a “hands-off” approach to the crisis from federal officials.

No jurisdiction in the country has used any other vaccine in this outbreak thus far, CDPH stated.

KRON4 had reached out to the state health department, the San Francisco Department of Public Health, and the United States Centers for Disease Control and Prevention for a Tuesday story on ACAM2000, 100 million doses of which are in the Strategic National Stockpile. ACAM2000 is the only other federally-approved treatment for smallpox (the smallpox and monkeypox viruses are so similar that smallpox vaccines, like ACAM2000 and Jynneos, are effective for both, health officials say).

Why 100 million vaccines aren’t being used for monkeypox

The CDC stated that states can request the ACAM2000 vaccine. Responding after the publication of that piece, a spokesperson with the CDPH stated “California has requested and received 200 ACAM2000 vaccine doses.”

“To date there have not been any requests to CDPH for ACAM2000 for distribution and to our knowledge no other states have distributed or administered ACAM2000 to prevent monkeypox infections,” the spokesperson stated. “CDPH will continue to review the risks and benefits of ACAM2000 use in California.”

When asked if these 200 doses are to fight the monkeypox outbreak, the spokesperson replied “We won’t have anything additional to share this evening.”

Around the same time Wednesday evening, Noel Sanchez of the SFDPH confirmed that “SFDPH is considering whether, when, and how we might deploy ACAM2000 smallpox vaccine for protection against monkeypox.”

“To our knowledge, no US jurisdictions have yet opted to deploy ACAM2000 for use against this monkeypox outbreak,” Sanchez continued. “ACAM2000 supply is plentiful, which is a significant advantage given the shortage of Jynneos. However, its use in any population, including San Francisco, must be evaluated on a risk-benefit basis.”

In their entireties, the statements echoed the concerns shared in the Tuesday story about the potential dangers of the ACAM2000 vaccine. Particularly, people with eczema have a risk of severe disability or death, according to the FDA, due to the live nature of the vaccine. People with a human immunodeficiency virus infection, or eye disease “should be identified and measures should be taken to avoid contact between those individuals and persons with active vaccination lesions,” the FDA states.

The vaccine is made with a live cowpox virus, a close relative to smallpox and monkeypox.

“There is also a risk that people who receive ACAM2000 could accidentally spread the cowpox virus from the vaccine to close contacts who are unvaccinated,” Sanchez stated. “Special training and equipment are also required to administer the vaccine safely and effectively. Due to these limitations and challenges, the Jynneos vaccine, while in short supply, is considered safer and preferable for widespread use. As the monkeypox situation evolves, SFDPH remains committed to exploring all options to protect San Franciscans.”

The ACAM2000 vaccine is no longer routinely given because it “has a higher risk of serious side effects, including hospitalization and death, than most other vaccines,” Sanchez stated.

It was first approved in 2007 by the FDA, replacing Dryvax as the nation’s go-to smallpox vaccine. Just a few years earlier, there were widespread fears that then-Iraqi dictator Saddam Hussein was making or stockpiling smallpox, according to the Associated Press. Though Hussein had used chemical weapons during the Iran-Iraq War and in at least two massacres inside Iraq, no smallpox was found after the U.S.-led invasion in 2003.

Smallpox was eliminated as a naturally-occurring virus in 1980, though there are viral samples in the U.S. and Russia.

CDPH stated that “Given these complexities, CDPH is currently focusing on requesting and distributing Jynneos vaccine.”

Matt Hartwig, senior director of media relations for Emergent Solutions, the manufacturer of ACAM2000, told KRON4 that “ACAM2000 is not indicated for the treatment of monkeypox in the US or any other jurisdiction. We are aware that some governments and public health organizations have stated that our smallpox vaccine could be used to combat the current monkeypox outbreak. This is information governments and public health organizations are sharing based on the scientific data they have available.”

Hartwig stated that “The risk for experiencing serious vaccination complications, as detailed in the label, occur with a frequency of <1% for the individual complications.”

Local health advocates and politicians have been blaming at the federal government for the slow response to the monkeypox outbreak, which as of Thursday has led to over 25,000 cases worldwide, including almost 7,000 in the U.S.

The vaccine that has been used to respond, Jynneos, was approved in 2019 for the prevention of smallpox and monkeypox. The New York Times on Wednesday reported that the U.S. Department of Health and Human Services had a “hands off” response to the outbreak at first, even allowing European countries to take doses that the U.S. had already paid for, and that because of these early failures, it does not expect the next delivery of vaccines until October.

The report also states that the federal government anticipates needing 3.5 million doses total to vaccinate people currently at highest risk for monkeypox infection — several times as many doses as will be available in the foreseeable future.

The federal response has brought comparisons to the foot-dragging at the beginning of the COVID-19 pandemic, and the AIDS epidemic in the 1980s.

“This is not the 1980s, Joe Biden is not Ronald Reagan, and monkeypox is not HIV,” San Francisco District 8 Supervisor Rafael Mandelman, who represents the Castro neighborhood on the Board of Supervisors, said during a public hearing last month. “But this is an eerily familiar experience for the queer community, especially for long-term survivors of the early, ugly days of the AIDS crisis and the federal response.”

KRON ON is streaming live

What are the symptoms of monkeypox?

Symptoms of monkeypox include onset of flu-like symptoms and distinctive rashes or sores that could look like pimples or blisters. CDC statistics show the most commonly-reported symptoms are rash (99%), malaise (70%) and fever (64%).

While the red, flat spots which become bumps can be anywhere on the body, they are most likely in the current outbreak to affect the genital or rectal areas, or the fingers, mouth or eyes. The spots become bumps, which break and crust over into a scab. They may be itchy, but not necessarily.

Further, some people only get one or some of these symptoms; it is possible to have a fever but never a rash, or have these symptoms sequentially and not concurrently.

What is the monkeypox vaccine?

The monkeypox virus is in the orthopoxvirus family alongside smallpox, for which routine vaccination in the U.S. ended in 1972 after the disease was declared eradicated here. Jynneos, a vaccine approved for both smallpox and monkeypox, is at least 85% effective against monkeypox, though its effectiveness reduces over time.

Getting the vaccine within 14 days of exposure can prevent or mitigate disease risk, as the incubation period can be weeks.

Healthcare providers should test for other infections with similar symptoms, such as syphilis. Tests for monkeypox are confirmed at specialized labs.

Side-effects of the vaccine could include redness, pain or swelling at the injection site, muscle pain, headache, fatigue and nausea.

Who can get a monkeypox infection?

However, Sanchez cautions that anyone could become infected with the monkeypox virus.

“SFDPH takes monkeypox seriously,” Sanchez stated. “While most cases resolve on their own without pills or treatment, monkeypox can be serious. We are trying to contain outbreaks and reduce transmission to avoid the virus spreading to more people and potentially becoming endemic. To that end, we are doing education and outreach to communities most at risk; tracking monkeypox cases; distributing and administering vaccines as a preventative measure to people at high risk because of an exposure; and supporting testing and clinical guidance to providers, among other efforts.”