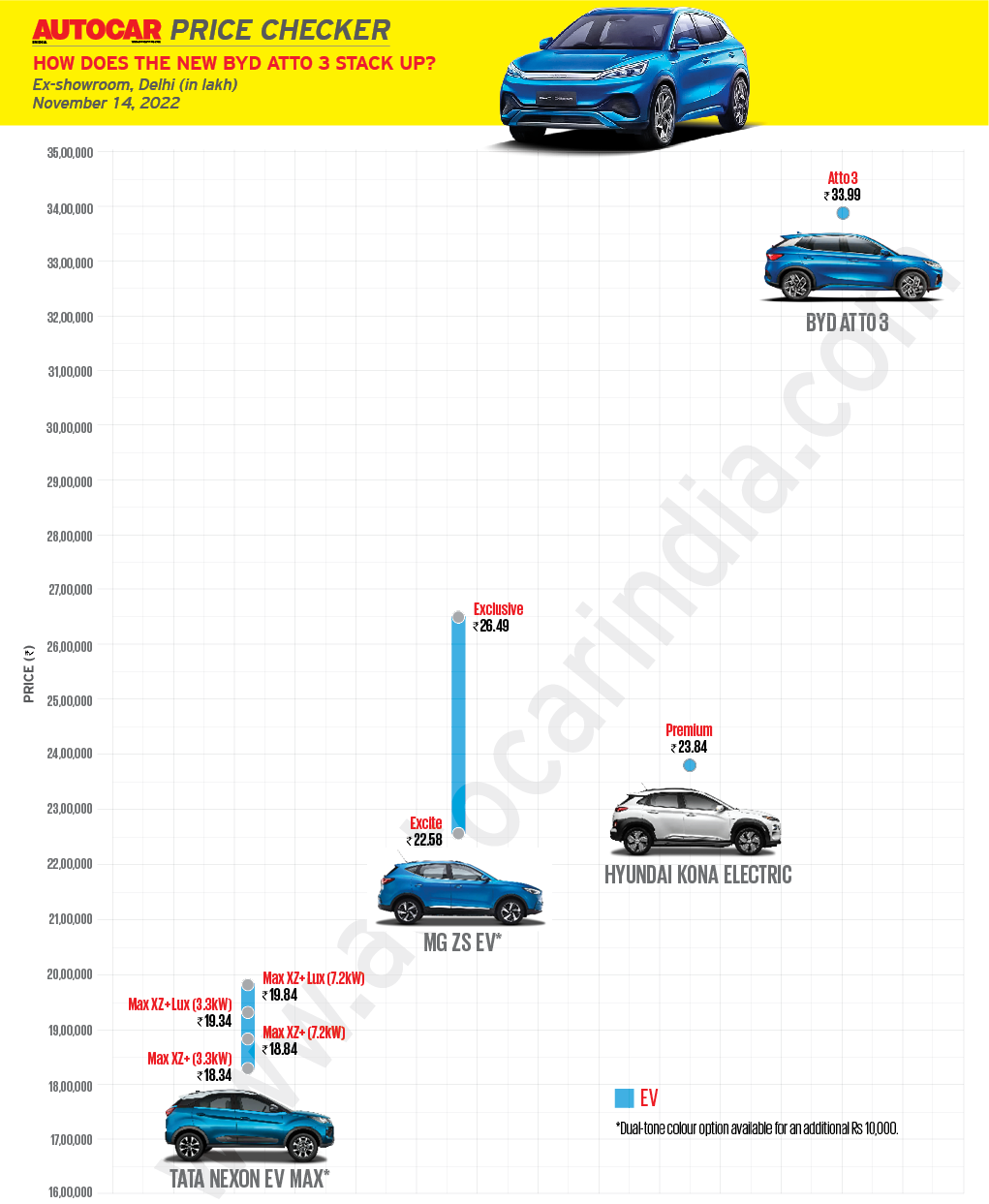 The Atto 3 offers a claimed ARAI range of 521km; BYD has already garnered 1,500 bookings so far.

Chinese automaker BYD (Build Your Dreams) has launched the Atto 3 in India at Rs 33.99 lakh (ex-showroom, India). The Atto 3 is the second model from BYD for India after the e6 MPV, which was made available to private buyers back in August this year.

BYD has been accepting bookings for the Atto 3 since the SUV was unveiled on October 11 for a token amount of Rs 50,000. The company says they have garnered 1,500 bookings so far. The first batch of deliveries will commence in January 2023.

The Atto 3 sports a blanked-off silver front grille flanked by sleek headlights with wing-shaped LED DRLs. Other elements at the front include the BYD lettering on the grille, a trapezoid-shaped dual-tone bumper and a faux silver skid plate.

Powering the Atto 3 is a front axle-mounted permanent magnet synchronous electric motor that produces 201hp and 310Nm of torque, allowing the electric SUV to complete the 0-100kph sprint in a claimed 7.3sec. BYD has equipped the Atto 3 with a 60.48kWh Blade battery pack that offers an ARAI-rated range of 521km and regenerative braking.

The Atto 3’s battery pack can be charged in approximately 10 hours using a Type 2 (7kW) AC charger and in 50 minutes (from 0 percent to 80 percent) with an 80kW DC fast charger. The company is offering a 7kW home charger and a 3kW portable charging box.

The Atto 3 also comes with Vehicle to Load function with a power output of 3.3kW, which means that the battery pack can be used to power external electrical appliances.

The BYD Atto 3 goes up against the MG ZS EV and the Hyundai Kona Electric in the Indian market. Despite not being a direct rival in terms of price, the Atto 3 will also see competition from the Nexon EV Max.

Coven of Chaos’ Could Bring Iron Lad to the MCU

How to Host an Allergy-Friendly Potluck

5 Reasons to Play Ninja Must Die this Holiday Season