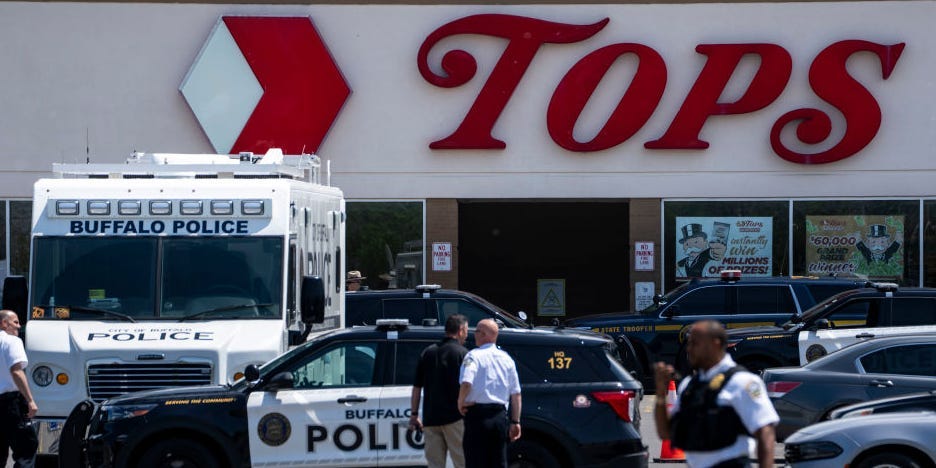 The white Buffalo, New York, mass shooting suspect spared a white victim and apologized to him before he moved on to find more Black people to kill during the racist attack at a supermarket last month, new federal court documents revealed on Wednesday.

The 18-year-old shooting suspect — who has been charged with killing 10 Black people and wounding three others in a hate-fueled attack at a Tops Friendly Market on May 14 — apologized to a white grocery store worker after he allegedly killed several people, the FBI said in the court papers.

Moments after the shooting suspect allegedly shot dead his seventh victim, the man aimed his Bushmaster XM-15 rifle at a wounded white employee, but then backed off after realizing the man was white, according to an affidavit filed with a criminal complaint.

“Rather than shooting” the white employee, the shooting suspect said “sorry,'” to the victim “before moving on through the rest of the store in search of more Black people to shoot and kill,” the court documents filed in the US District Court for the Western District of New York allege.

That employee — who prosecutors say was at some point shot in the leg and injured during the rampage — was identified by the Daily Mail as a 55-year-old manager at the store.

“The guy could have literally shot him dead – but he didn’t,” one of the victim’s friends told the news outlet.

Prosecutors allege the shooting suspect attacked the supermarket because it was in a predominantly Black neighborhood and that he wanted to “inspire others to commit similar attacks,” the federal criminal complaint states.

Of the 13 people shot at the store in a predominantly Black neighborhood of Buffalo, eleven of the victims were Black, while two were white, authorities have said.

The shooting suspect was charged on Wednesday with multiple counts of federal hate crimes in connection to the attack. He could face the death penalty if convicted of those charges.

The suspect was already facing life in prison without parole if convicted on state-level charges that were previously filed against him. He has pleaded not guilty to those charges.

Authorities have said the shooting suspect penned a racist screed before the massacre; Insider is not publishing those details, as federal prosecutors say the suspect wrote the hate-filled rant to “increase coverage” of the massacre and “inspire others to commit similar racially-motivated attacks.”