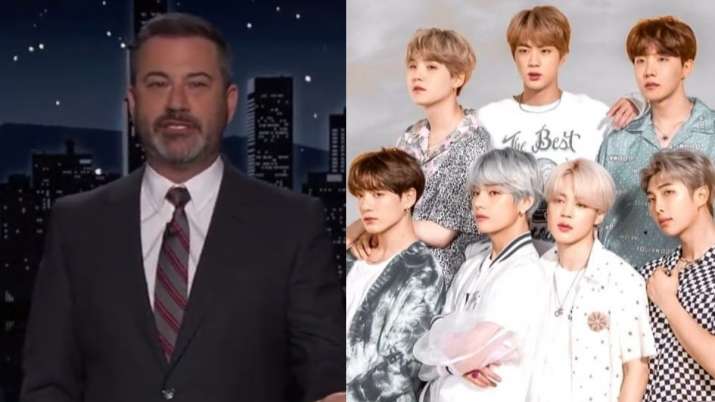 Netizens are calling out American television host and comedian Jimmy Kimmel on social media for allegedly making another racist joke about popular South Korean band BTS in the latest episode of his talk show ‘Jimmy Kimmel Live’. A video of Kimmel is doing the rounds on the internet where he could be heard comparing the spread of deadly variants of COVID-19 to hit bands from Backstreet Boys to One Direction. While he doesn’t directly name BTS, the subtext was loud as per the K-Pop band’s fans.

“These variants, all the different variants in the world right now, it reminds me of the boy bands in the late 90s and early 2000s,” Kimmel said in the monologue. “You had the big ones like Backstreet Boys and NSYNC, and then that mutated into O-Town and 98 Degrees. The JoBros popped up, Big Time Rush, they kept splitting off in different directions, eventually One Direction. And they took pieces and it popped up all over the world until eventually, we get to one that’s so contagious it destroys all life on Earth,” he concluded.

A few hours after the video went viral on the internet, Twitterati slammed him for allegedly delivering derogatory remarks against the band and making fun of a sensitive issue like COVID-19. “So contagious it destroys all life on earth” I just don’t understand how they wrote the script approved it and put it on tv with no one questioning it like so many people dying of COVID and this guy is like “haha boybands!! am I right?? wtf,” a Twitter user wrote.

“This language is racist and these “jokes” are racist there is no other way to address it #jimmykimmelracist,” wrote a second user. Another commented, “The context of this joke is last week Jimmy made a joke likening B*T*S to covid, people called him out on it. Now he makes this joke, implying that B*T*S are the deadliest boy band. Hate crimes against Asians have increased since covid began & these jokes normalise xenophobia.”

“This man doing this for the second time in a row & utterly being disrespectful to particular artist & his words were clearly implying towards just one at the end, how this is 2022 & we are not enough educated yet to state this wrong & man like him shouldn’t have a platform anymore,” a BTS fan tweeted.

Another fan wrote, “He’s bitter BTS was there only 1 time? I’m actually happy they don’t go there anymore.” “Racism is not a joke. Covid19 is not comedy. #JimmyKimmelRacist,” a Twitter user wrote.

This comes after he recently compared the spread of COVID-19 to the ‘BTS fever’ in his interview with ‘Emily in Paris’ star Ashley Park. While discussing her ‘Dynamite’ cover on his show, Park gushed that it felt like a total dream when several of the K-Pop group’s members reposted her number on social media. She also recalled her diagnosis with COVID-19.

Meanwhile, Kimmel came under fire when he compared Park’s COVID-19 diagnosis with ‘BTS fever’ joking, “You thought it was BTS fever. They’re both very dangerous. You’re lucky to come out both of those alive.”

PlayStation’s Days of Play 2022 Sale to Begin Next…