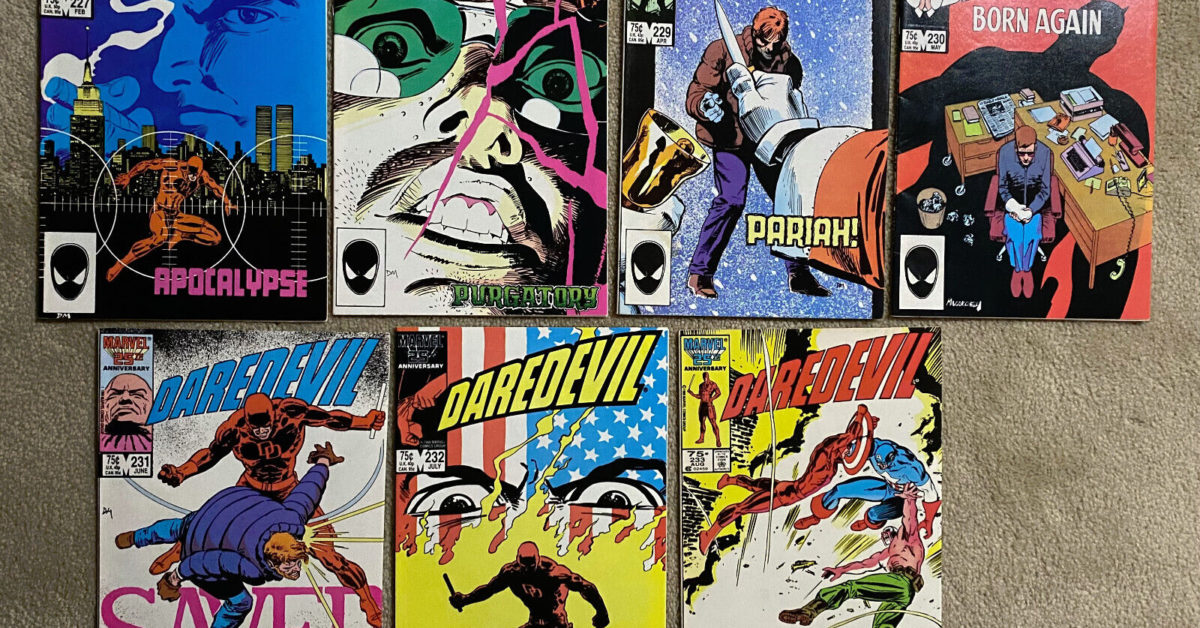 Yesterday, amid their Phase 5 and Phase 6 announcements, Marvel Studios announced Daredevil Born Again as an eighteen-episode series for Disney+ with Charlie Cox and Vincent D’Onofrio reprising their roles as Kingpin and Daredevil, after both recently appearing in Spider-Man: No Way Home and Hawkeye respectively.

And eBay noticed. Born Again was a 1986 Daredevil story written by Frank Miller, and drawn by David Mazzucchelli, considered the most iconic run in the character’s history.  Running from Daredevil #227–231, it was later collected as a graphic novel with the previous issue #226, and a follow-up story from Daredevil #232–233, The story looks at Matt Murdock’s early days, as well as the assault on his sanity and finances by the Kingpin, breaking him as a man and superhero, before finding a way to rebuild his life, morality and identity. Aspects of the story were already adapted into the third series of the Netflix Daredevil show, but it has given its title to the newly revived fourth series, just announced.

At the beginning of the month, you could pick up Daredevil #226 and #227 for around three bucks each. Now? Not so much. In the last two days hundreds of copies have been changing hands, with raw copies of #227 going for around fifty bucks each and people unable to find any copies of #226 outside of long runs and sets. Just a couple of weeks a set of #227 to #233 went for $22 today it sold for $110. No one has sold a copy of #226 in days. Might it be worth checking through your longboxes? As well as keeping an eye on some of the other announced titles?

‘Kirby And The Forgotten Land’ director on “Mouthful Mode” origins