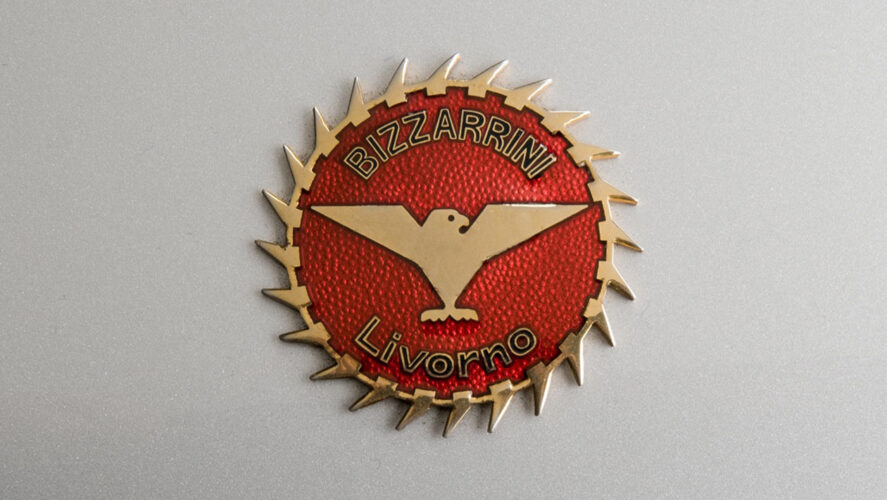 The Bizzarrini logo appeals to me through its defined golden eagle in the centre of the red, circular emblem. The rim is like no other; a flurry of sharp fins outlining the logo shows both the elegance and ruthlessness of the car’s design and performance.

In truth, there isn’t much history of this logo because the company only lasted 5 years. However, the story of the founder of Bizzarrini Sp.A is certainly worth telling.

Giotto Bizzarrini was an Italian engineer and founded Bizzarrini Sp.A in 1964. By this time he had a wealth of experience, having previously engineered at Alfa Romeo, Ferrari, Lamborghini, and Iso. Born in Livorno in 1926, Giotto was the son of a wealthy landowner in a highly respected family in Tuscany.

Giotto graduated in 1953 as an engineer at the University of Pisa. He began his working life as a teacher of engineering before he joined Alfa Romeo in 1954. He went on to engineer for various high-end automobile companies before going on to build cars under his own name.

His skills were abundant, developing advanced designs for AMC in the Sciabola AMX project. His eye for style led him to being technical consultant for GM in Europe and the United States, for Top Marques Japanese motorcycle, and helped known designers like Pininfarina.

‘Bizzarrini SpA’ began its life as ‘Bizzarrini srl prototypical’ and went on to change its name in 1966. The company built a few highly developed and advanced racing and sports cars in its brief existence, before failing in 1969.

The brand was revived in the 2000s with a series of concept cars.

As of the time this article was written Giotto Bizzarrini is still busy teaching and working at the ripe old age of 96. He delivers his wealth of knowledge at the University of Rome, working with advanced project development and design, helping them build and develop their own sports cars. In his own words, Giotto said “I am not a car designer, I am a worker.”

Actress Divya Agarwal shares a heartwarming video celebrating Makar Sankranti with her house help and we are in awe!