Billy Eichner On LGBTQ Movie Bros Being a Labor of Love 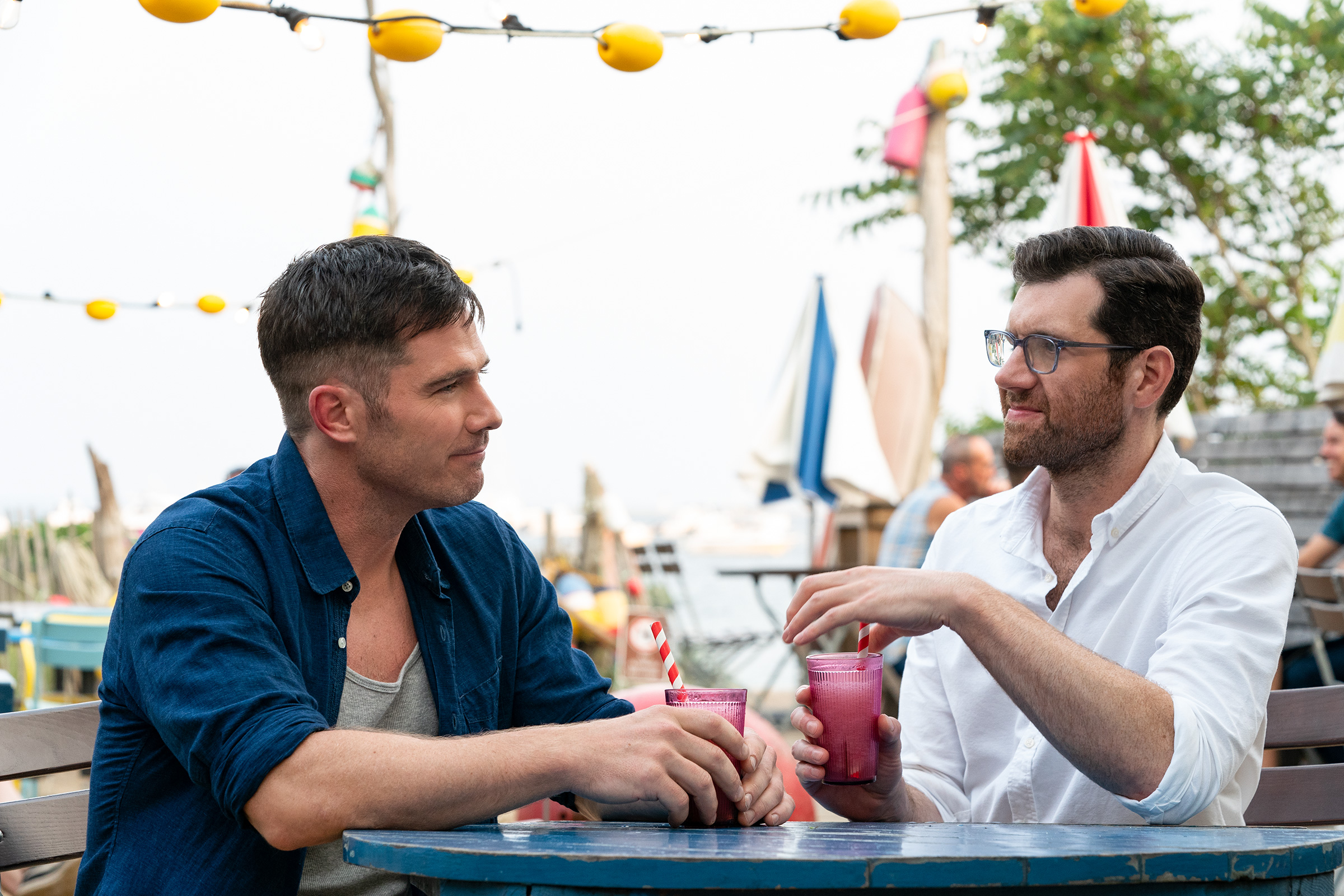 Billy Eichner can’t believe this is happening. He really never thought this day would come. Even five years into co-writing, producing, starring in, and now promoting his film Bros, it’s still surreal that it exists. “I just look at the screen and I’m like, ‘That’s me?’” he says.

Eichner, 43, isn’t being modest—for a long time, it really was unimaginable. Because Bros is a major studio romantic comedy, produced by Judd Apatow, in the tradition of Knocked Up and Trainwreck, with a revolutionary distinction: It’s not a boy-meets-girl story but a boy-meets-boy one.

It’s conventional in the sense that all the action is built around the connection of its romantic principals, Eichner’s podcaster/museum director character Bobby and the decidedly more reserved Aaron, played by Hallmark Christmas movie staple Luke Macfarlane. But Bros, out Sept. 30, is radical in its skewering of the finer points of gay culture like Grindr etiquette and poppers, as well as its repeated references to LGBTQ history. As with any rom com faithful to the form, the devil is in the details, but this time he’s waving a rainbow flag.

Eichner had a memorable run on Parks & Recreation, voiced Timon in the 2019 live-action remake of Disney’s The Lion King, and played Matt Drudge on the 2021 limited series Impeachment: American Crime Story. But he’s still probably best known for his work on the TV show Billy on the Street, which ran 2011-17. There, he was downright diabolical, quizzing unsuspecting denizens of New York about pop culture, sometimes with a celebrity like Mariah Carey in tow, often by screaming in their faces. He contends that persona was satirical, and Eichner’s IRL vibe, even over Zoom, is turned down several notches. Speaking about Bros, he was thoughtful about his “historic” movie and what it means for a culture that has been long starved of queer content. He’s the first openly gay man to write and star in a major studio film; it’s arguably the biggest movie to come out of the studio comedy system to trace a relationship’s formation in the modern world of gay men. But whatever its firsts are, there’s no denying it’s a big deal.

And sure, part of Eichner is in disbelief about the whole thing, but another part of him has very much believed since he was a child growing up in Queens that top-lining a major motion picture was his destiny. He acknowledged that he’s an “unlikely” leading man, but has the confidence to appear onscreen shirtless and show his butt. He thinks he and Macfarlane have “really good chemistry” and that when he watches Bros—which he’s seen five times—he gets “swept away.” His capsule review of his own movie? “I really love it,” he says. He wore a baseball cap bearing the title during our interview and his social media feeds have been saturated with Bros-related posts.

He’s come a long way since writer-director Nicholas Stoller (Forgetting Sarah Marshall, Neighbors) approached him to ask whether he’d want to write and star in a gay rom com. Stoller, Eichner said, had gotten the idea at a screening of the Netflix show Friends from College, which Stoller co-created and Eichner appeared in. Stoller approached Eichner between the show’s two seasons. Eichner had never written a script before and had no story in mind, but “instinctively” said yes. “Once I started, I realized I had so much to say,” he says.

Eichner and Stoller, who would eventually direct, went back and forth: One would write a scene, the other would revise. Stoller brought a familiarity with the nuts and bolts of screenwriting, whereas Eichner had “over 20 years of experience” under his belt as an openly, sexually active gay man.

Eichner, right, as Bobby and Luke Macfarlane as Aaron in Bros

Bros is as pop-culture obsessed as any product of Eichner’s brain is bound to be (there are especially funny running gags about Queer Eye and increasingly diverse programming on the Hallmark Network, here referred to as Hallheart). Beyond the political implications of going deep about gay life, he also strove to create something “that lived up to the standards of great romantic comedies.” He mentioned several such inspirations during our 90-minute conversation: Broadcast News (he name-checked it five times), Moonstruck and Annie Hall (three times), and Tootsie (once).

“Authenticity” is a word Eichner uses frequently. The theme of the movie, at least on a meta level, is a refutation of the marriage-equality rallying cry “love is love.” Bros argues quite explicitly (and in explicit sex scenes) that love, in fact, is not love. “That is a lie we had to make up to convince you idiots to treat us fairly,” explains Bobby in the film. “Love is not love. Our relationships are different. Our sex lives are different.” During our interview, Eichner offered a more subdued spin—acknowledging the phrase’s political importance and essential truth, but standing by his character’s contention that it’s devoid of nuance. But given attacks on trans rights and Clarence Thomas’s Dobbs opinion suggesting that the Supreme Court may set its sights on rolling back gay-marriage rights, have those “idiots” been adequately convinced to warrant exposing the phrase’s fallacy? “Honestly, I don’t think saying ‘love is love is love’ to Clarence Thomas, at this point, is going to move the needle with him very much,” says Eichner with a shrug.

Eichner says he ultimately wrote what he knew. And the words flowed, but not without trepidation. “I’ve been conditioned to think that if I’m too honest about my life in my work that it won’t be accessible, that no one will buy it, that no one will see it, that straight people won’t want to watch it,” he says. This particular anxiety shows up on screen during an emotional scene set on a beach in the gay mecca of Provincetown, Mass., where Bobby laments: “I was always too gay or too niche or I made people uncomfortable. Even my dad who was so wonderful and supportive, I remember him saying, ‘You know not everyone wants to hear this gay stuff all the time.’ But what was I supposed to do?”

He worried in particular about how the studio would react to the length of that beach monologue, which was “heavily and very specifically inspired by real moments in my life.” Universal, he says, specifically praised that scene after an early screening.

How much of Billy is in Bobby is hard to pin down—when asked for a percentage, Eichner demurred. Still, he contends that the movie is “heavily autobiographical.” And even where it is not, it was nonetheless useful. He said that writing Bros was a good reminder to not ignore the potential for romance in his own life, as he is “often” and, in fact, currently single. “It’s very rare you meet someone that you actually connect to in a really special, powerful way that isn’t someone you’re just settling for,” he says. “And I’ve never been someone who felt the need to settle for anything.” That said, he tailored his script to refrain from sending the typical rom com message that the point of life is a “romantic relationship with one other person, and if you don’t get that your life is a failure.”

Though his specific experience as someone in the public eye for nearly 10 years may present a kind of rarefied spin on the urban white gay experience, Eichner rejects the idea that fame has gotten in the way of his bro-dom. “If you want to, you can make the choice to conduct yourself like a normal person and just go with the flow and stay grounded in that way,” he says. He’s on apps, but says he does not send pics of his junk to prospective partners—unlike Bobby in the movie.

Bros may be an overall fresh take on a tried-and-tested film genre, but elements of it are faithful to the way Hollywood has long operated—namely, this is a story brought to you by white people about white people falling in love. Bobby admits with self-deprecation at one point that he’s “just a boring, old cis white gay,” and yet the surrounding script seemingly disagrees—he’s not boring at all, Bros argues. He’s someone whose story is prioritized, someone worth hearing pontificate on a variety of aspects of queer culture.

Regarding the optics of breaking the rom-com ceiling as a white man, Eichner said, “You’d have to be completely out of touch not to think about that.” Ultimately, he said, he wrote the script as a vehicle for himself and he is, in fact, a cis white gay. He did not feel secure in writing about the intersectional issues that would have been required if his love interest were of color. “I am smart enough to know that, while there might be some overlap in terms of those issues between white gay men and men of color, I didn’t think anyone wanted my take,” he says. Ultimately, he pointed to the overall diversity of the cast, which aside from Kristin Chenoweth and Debra Messing (who cameo), is made up entirely of LGBTQ performers including TS Madison, Bowen Yang, and Guillermo Diaz.

Besides, reasoned Eichner, “The whole point of this is that we make a movie that’s so funny and so relatable and so moving to all audiences, straight and LGBTQ, that the industry and other major studios are encouraged to make more movies and from different perspectives.” If Eichner has a say, he’ll remain on the vanguard. He’s signed on to star in Amazon Studios’ Ex-Husbands, which he has described as a “big, gay divorce comedy,” and he’s also attached to a biopic of the famously (and barely) closeted comedian Paul Lynde.

In the meantime, he hopes to win over hearts, one hetero at a time. He gushed about the reactions from early screenings of Bros, recalling a text he received from a straight guy friend of his, who told him, “It’s hilarious, but it also made me want to go home and tell my wife that I love her.”

Eichner’s response is surprisingly earnest. “I was really moved by that,” he says. “There’s hope for straight men yet.”