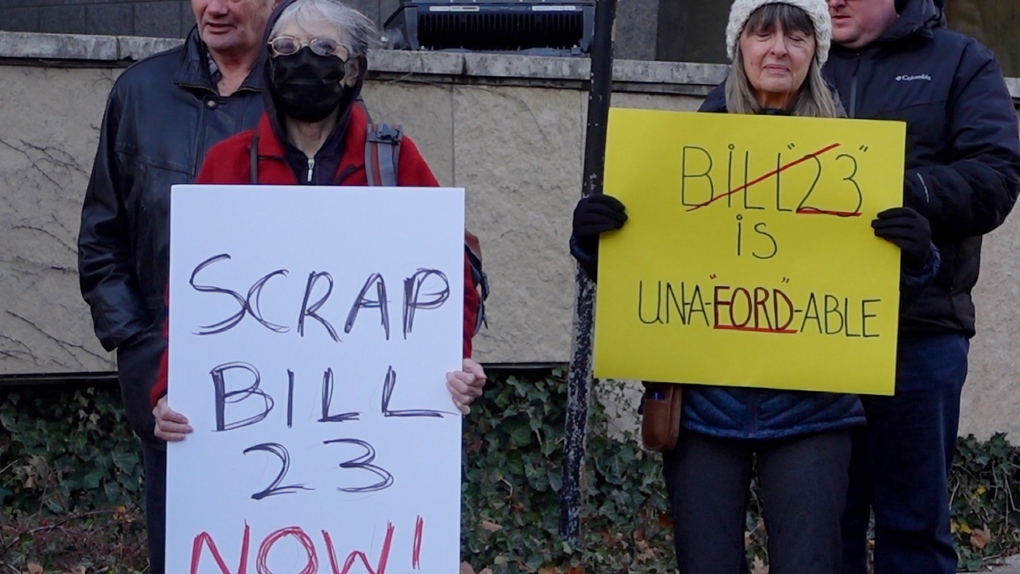 The province’s proposal to streamline local planning processes to help address Ontario’s housing shortage would carve a massive financial hole in London’s municipal budget, according to a new report.

Civic Administration warns in a report, “it is estimated that the overall impact to the City of London will be $97 million+ over a 5 (year) period.”

The primary financial costs would be:

Development charges are municipal fees on new construction that cover the cost to expand infrastructure and services to address the growth.

If they are underfunded, then those additional costs are born by the existing property tax base.

“Growth pays for growth when we have access to these dollars,” explained Morgan. “We certainly compromise that approach when we take away that funding source.”

Bill 23 is being fast tracked through Queens Park, having been introduced on Oct. 25 and closing to comment on Nov. 24.

A protest was held by Acorn London outside city hall in London, Ont. on Nov. 18, 2022 against skyrocketing rental prices and Bill 23. (Marek Sutherland/CTV News London)

Acorn London believes Bill 23 would have a devastating impact on low and moderate income renters.

The report from Civic Administration added, “the Bill in its current form would result in unintended consequences that do not address the dependencies between land use policy, infrastructure planning, construction phasing and financing.”

Morgan believes concerned cities across Ontario should be given a chance to consult with the province through the newly created Housing Supply Action Implementation Team.

“I’m a big believer in that local decision making mechanism, but I do recognize the province has the ability to make these changes,” he said. “What I would prefer is that we do this in consultation with each other.”

The report will be considered by the committee and council on Nov. 22.