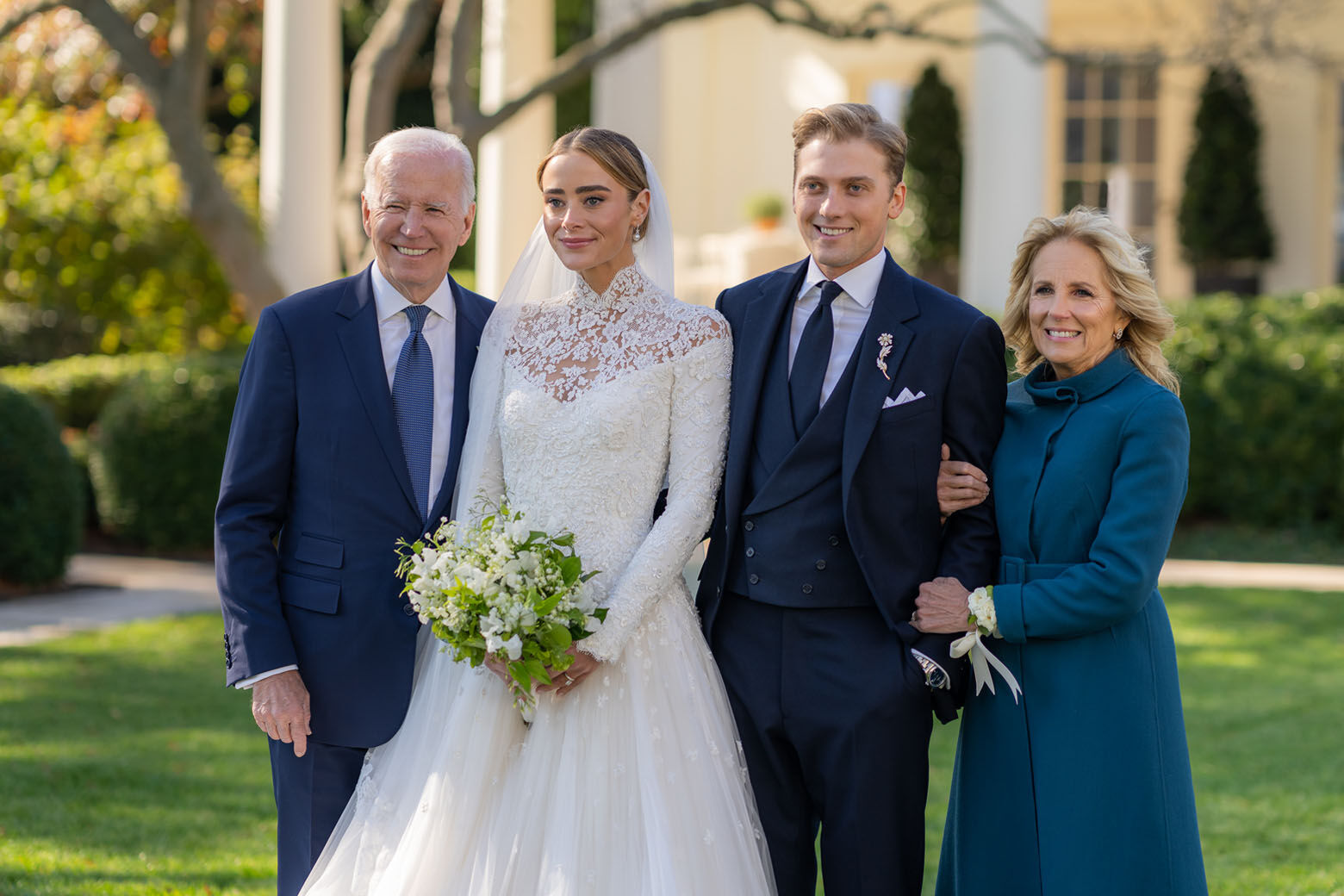 WASHINGTON (AP) — Trailed by a lengthy, flowing veil, President Joe Biden’s granddaughter Naomi Biden walked across the South Lawn of the White House on Saturday toward an altar of shrubs and flowers to marry her longtime boyfriend Peter Neal in a rare wedding on the grounds.

Theirs was just the 19th wedding in 200-plus years of White House history.

Under a sunny, blue sky paired with unseasonably crisp 40-degree temperatures, the bride and groom, both dressed by American fashion designer Ralph Lauren, exchanged “I do’s” as 250 family members and friends watched as they were united in a nearly hourlong ceremony.

Naomi Biden, 28, wore a long-sleeved, high-neck gown and veil covering hair that had been styled behind her head. Neal, 25, chose a navy blue, three-piece suit with a double-breasted vest.

“It has been a joy to watch Naomi grow, discover who she is, and carve out such an incredible life for herself,” they said in a statement announcing the marriage of Naomi King Biden and Peter George Heermann Neal.

“Now, we are filled with pride to see her choose Peter as her husband and we are honored to welcome him to our family,” they said. “We wish them days full of laughter and a love that grows deeper with every passing year.”

The south side of the White House, facing the lawn and Washington Monument, was decorated with wreaths and garland bearing white flowers. The bride walked down an aisle that led from the Diplomatic Reception Room to the altar of shrubs and white flowers.

Guests began arriving at the security checkpoint hours before the ceremony, including women in open-toed shoes despite the chill. Some guests were given hand warmers. Most wore coats, and some topped off with hats and scarves.

It is the first White House wedding with a president’s granddaughter as the bride, and the first one ever on the South Lawn.

Pennsylvania Avenue was closed to ordinary pedestrians before and during the ceremony, as was a sidewalk bordering the Ellipse, the park just south of the White House.

After the ceremony, the newlyweds, their families and the wedding party had lunch in the White House. A reception with dessert and dancing was planned for later Saturday. President Biden went to church in Washington in between events.

Unlike some past White House weddings, Naomi Biden and Neal barred journalists, although the ceremony was outdoors on the grounds of what the president and first lady call the “people’s house.” The White House released a photo, and others were posted on the wedding planner’s social media account.

Naomi Biden is a lawyer in Washington. She is the daughter of Hunter Biden and his first wife, Kathleen Buhle.

The couple, who have been living at the White House, was set up by a mutual friend about four years ago in New York City and have been together ever since, the White House said. Neal proposed in September 2021 near his childhood home in Jackson Hole with a ring that repurposed the band of his grandmother’s engagement ring, according to the White House.

The White House has released few other details about the wedding, citing the couple’s desire for privacy. The Biden family will pay for all wedding activities, officials have said.

“Naomi and Peter have asked that their wedding be closed to the media and we are respecting their wishes,” White House press secretary Karine Jean-Pierre said Friday.

White House weddings are rare. There have been 18 documented weddings in the 200-plus-year history of the White House. Nine involved a president’s daughter, most recently Richard Nixon’s daughter Tricia in 1971 and Lyndon Johnson’s daughter Lynda in 1967.

But nieces, a grandniece, a son and first ladies’ siblings have also gotten married there. One president, Grover Cleveland, tied the knot at the White House, too, while in office.

Some of the weddings were open to coverage by the news media, while others weren’t at all.

Journalists were allowed into Tricia Nixon’s wedding to Ed Cox, the first wedding held in the Rose Garden. Her wedding planner — a three-ring black binder in the offices of the White House Historical Association — includes extensive notes on the media plan.

But the May 1994 wedding of a brother of then-first lady Hillary Clinton and the daughter of then-U.S. Sen. Barbara Boxer — the first since Tricia Nixon’s marriage — was closed to the press. Clinton’s spokesperson commented afterward and the White House released a photo.

It was the same for the October 2013 wedding of Pete Souza, President Barack Obama’s official photographer, and his longtime partner, Patti Lease. The White House announced the wedding in a statement following the small, private wedding in the Rose Garden.

“White House weddings have been covered by the press throughout history and the first family’s wish for privacy must be balanced against the public’s interest in an event occurring at the People’s House with the president as a participant,” the WHCA board said in a statement.