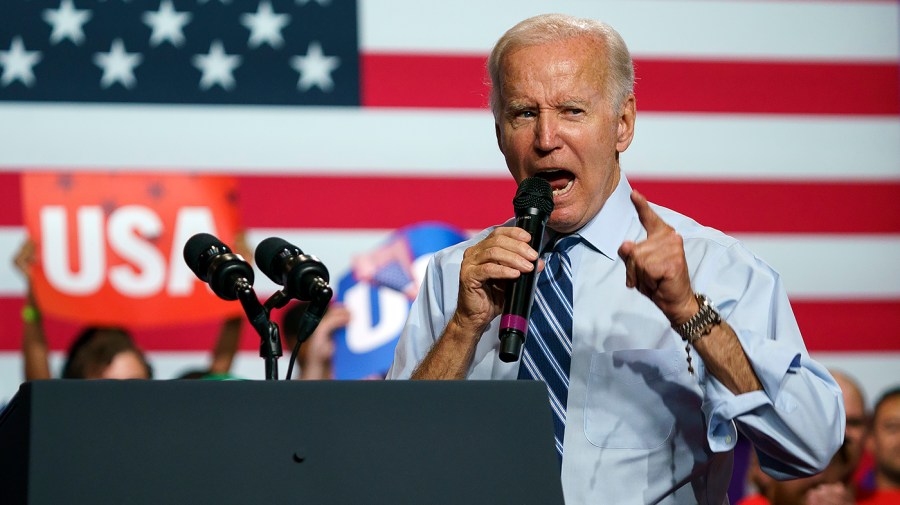 (The Hill) – President Biden will deliver a primetime speech from Philadelphia on Thursday about protecting democracy during which he will warn that Americans’ rights and freedoms are “under attack,” according to a White House official.

Biden’s speech outside Independence National Historical Park on Thursday evening will revive his 2020 campaign theme of fighting for the “soul of the nation,” according to the White House advisory, and is a sign of his message to voters coming into focus just two months out from the midterm elections.

Biden has begun to more forcefully criticize Republican candidates on the ballot in November, last week describing those who align themselves with former President Trump as threats to democracy and accusing them of embracing “semi-fascism.”

“The MAGA Republicans don’t just threaten our personal rights and economic security. They’re a threat to our very democracy,” Biden said at a rally in Maryland last Thursday, referring to Trump’s “Make America Great Again” slogan. “They refuse to accept the will of the people. They embrace, embrace political violence. They don’t believe in democracy.”

An NBC News poll released earlier this month found that a plurality of voters rank threats to democracy as the most important issue facing the country — a larger percentage than those who single out cost of living.

It’s unclear whether Biden plans to explicitly mention Trump during his Thursday address, but plans for the speech suggest he’ll at least allude to the former president and his false claims about the 2020 election.

Biden is increasing his domestic travel and is slated to travel to Pennsylvania — a key swing state — three times in the next week. He’ll visit Wilkes-Barre on Tuesday to discuss combatting gun violence and on Monday he’ll attend Labor Day festivities in Pittsburgh.

Some of Biden’s trips are aimed at promoting his accomplishments, including a planned stop in Ohio later this month at the groundbreaking of a new Intel chip plant that will highlight the passage of a law championed by the Biden administration that will boost the domestic semiconductor industry.

The MCU’s Mr. Fantastic May Have Been Found as ‘She-Hulk’ Gets a Surprise Guest Star