Biden released a “nature-based-solutions” climate roadmap at COP27. What is that? 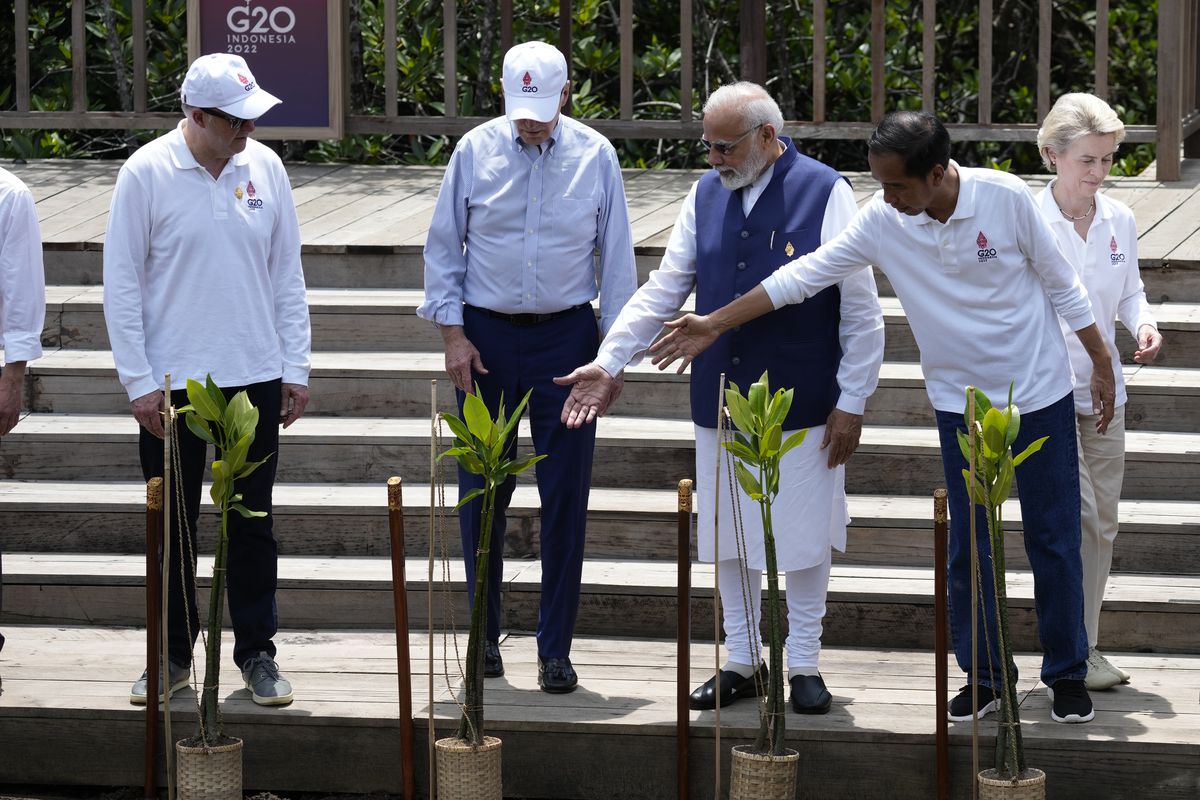 Last week, at the UN climate conference in Egypt, the Biden administration made what was supposed to be a big announcement: America is going all-in on nature-based solutions to fight climate change, at a cost of more than $25 billion.

The announcement drew little attention. Most major media outlets didn’t cover it, other than Fox News. Even some climate experts I spoke to hadn’t seen it.

Perhaps that’s because the phrase “nature-based solutions” is vague, and no one really knows what it means. “Is vinegar a nature-based cleaning solution?” one researcher joked with me.

Plus the Biden announcement itself didn’t detail exactly how it will spend the billions.

This points to an enduring problem with environmental policy: it’s littered with vague terms that, while trying to encompass everything, end up meaning nothing. It’s not just nature-based solutions but jargon like “regenerative,” “climate smart,” “nature positive,” “resilient,” and the OG buzzword “green.”

These terms sound inspiring and often refer to important actions — and it’s a good thing that governments are talking about climate-related policies at all. But they typically don’t have universally agreed-upon definitions, and as a result, the public (and even some experts) don’t understand what they mean.

That also makes them vulnerable to exploitation by companies that want to appear at the vanguard of climate action, according to Molly Anderson, a professor of food studies at Middlebury College. “The vagueness makes the terms very open to greenwashing,” said Anderson, referring to marketing that misleads the public into thinking something is more environmentally friendly than it is. “A lot of it is just branding.”

Clear definitions matter, especially as countries and companies are pushed to curb or reverse their impacts on ecosystems and the climate. It’s hard to hold them to account if you don’t know what they’re doing, experts say.

“If we’re trying to say the world should be doing things differently than the status quo to meet climate goals, or nature goals, or socioeconomic development goals, we need to be really clear about what it is that we’re proposing or promoting,” said Richard Waite, a food researcher at the World Resources Institute (WRI), a DC-based think tank.

So, let’s get clear: What do these buzzwords mean, how are they exploited, and what should we be using instead?

Nature-based solutions refer to different ways of addressing a particular human challenge by protecting, restoring, or better managing nature. Does that help you understand it? If not, we have something in common.

First, what is nature? In this context it usually refers to ecosystems like forests, grasslands, or coral reefs, that provide various benefits, such as water purification and flood control, which scientists often refer to as ecosystem services. Ecosystem services are typically synonymous with “benefits.”

And what about the challenge? Most commonly, nature-based solutions appear in the context of climate change and its symptoms, like intensifying heat waves and storms. So, they target different ways to reduce emissions, cool down the landscape, or safeguard coasts, using plants or animals.

That could include protecting old-growth trees that store immense amounts of carbon, restoring coral reefs, which can help control flooding during hurricanes, or helping farmers keep more carbon locked up in their soil. It could also include bringing back beavers, which are heroes during a heat wave.

In the last decade, nature-based solutions have become a key part of corporate and government climate strategies. (The oil and agriculture industries, which are heavily linked to environmental destruction, often tout their endorsements of nature-based strategies.) One 2020 analysis found that nearly two-thirds of countries that signed on to the Paris climate agreement included nature-based targets in their adaptation and mitigation strategies.

This brings us to Biden’s announcement last week. At COP27, his administration released a “roadmap” to put nature-based solutions at the center of US climate policy. It includes five recommendations for federal agencies, from increasing funding to developing new policies, in support of nature-based solutions. At the same time the roadmap is both highly technical and vague.

To help, the administration released a guide to existing programs it considers to be nature-based: They run the gamut from prescribed burns in the Sierra Nevada to restoring populations of oysters along the Louisiana coast. But because so many different activities qualify as nature-based solutions, it’s hard to know exactly how the $25 billion will be spent.

“Any rubbish can be branded as nature-based nowadays,” Teresa Anderson, a climate policy coordinator at the NGO ActionAid International, told Carbon Brief. “The term is so vague I could probably cut down a tree, whittle it down to a stick, wave it at the moon and call it a nature-based solution.”

Many “carbon offsets” are another set of nature-based solutions that don’t always end up protecting nature. These offsets are schemes wherein companies try to balance out their carbon footprint by protecting or restoring carbon-rich ecosystems.

A common criticism of offsets is that they allow for business as usual, according to a recent report by the International Panel of Experts on Sustainable Food Systems (Anderson is a co-author). In other words, companies can continue polluting as long as they also protect some trees. (This is one reason why some Indigenous advocates decry the idea of nature-based solutions.)

The simplicity of these terms can also obscure important tradeoffs, Waite of WRI said. Consider the term “regenerative.” Companies often use it to refer to farming practices that restore farmland and make it more like a natural ecosystem. That sounds great. But those actions sometimes reduce the amount of food that a farm produces — and as we look toward 2050, the planet will have more mouths to feed, not fewer. So, in some cases, making farms more environmentally friendly could mean countries will have to convert more natural habitats elsewhere to farmland.

The big question is how do you address climate change, stop biodiversity loss, and make sure everyone has enough to eat? Not with regenerative agriculture and nature-based solutions alone, Waite said. We’ll also need to drastically reduce food waste, eat less animal meat, and make other changes to the food system. (WRI has a useful overview of how to meet global hunger demand while protecting biodiversity and the climate.)

Zeroing in on what companies and governments are actually doing

Is there an alternative?

Molly Anderson argues that companies and governments should use terms with more legitimacy, such as “agroecology.” In the food world, agroecology — a form of sustainable farming rooted in Indigenous knowledge — has a widely agreed-upon definition and set of principles, Anderson said. “True food system solutions emerge through global, deliberative, democratic processes, and agroecology is the best solution that meets that criteria,” Anderson has said.

Yet agroecology is still a pretty wonky term and certainly not consumer friendly.

Other experts suggest we need to evaluate these programs on a case-by-case basis instead of trying to fit them into big, flashy buckets. Useful projects to protect or restore ecosystems usually sell themselves and can inspire the public, no matter what you call them, said Jen Hunter, an ecologist and resident director of the Hastings Natural History Reservation in Northern California.

“Did you know that mangroves in intertidal areas can buffer storm surge in a way that can protect low-lying coastal development?” Hunter said. “That stuff is legitimately interesting to people across the board without tagging all of these sort of buzzwords onto it.”

Understanding America’s political sphere can be overwhelming. That’s where Vox comes in. We aim to give research-driven, smart, and accessible information to everyone who wants it.

Reader gifts support this mission by helping to keep our work free — whether we’re adding nuanced context to unexpected events or explaining how our democracy got to this point. While we’re committed to keeping Vox free, our distinctive brand of explanatory journalism does take a lot of resources. Advertising alone isn’t enough to support it. Help keep work like this free for all by making a gift to Vox today.


Google Pay. You can also contribute via

20 Exciting Facts About England That You Should Know

Call Me By Your Name Director Still Wants To Do Sequels, But Will He Bring Back Armie Hammer? Here’s His Thoughts