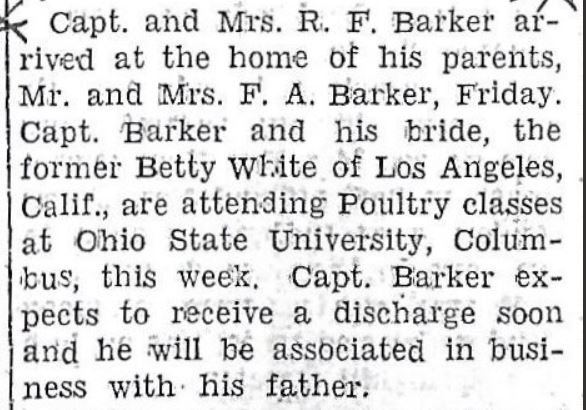 BELLE CENTER, Ohio (WCMH) — History sleuths dug into town archives to find out about Betty White’s time there, and discovered a tale of two worlds.

Betty White — who died Dec. 31 but would have turned 100 years old on Monday, Jan. 17, 2022 — told The Daily Beast that her marriage was short-lived on the family’s Belle Center chicken farm, where her live-in in-laws sent her outside to kill the family’s dinner.

“I said, ‘No way!’” White wrote in a 2011 article. “That was a real trauma because I’m such an animal nut. I couldn’t hack it, so I split and came back to California. We were married eight months, and it was a very bad mistake early on.”

The story goes deeper than that. A wedding announcement showed White was taking poultry classes at Ohio State University in Columbus with her dashing husband, Captain Richard Barker.

Betty White called him “Dick,” but Barker was known around Belle Center — about 65 miles northwest of Columbus in Logan County — as Bud. Beth Marshall, an assistant curator at the Logan Historical Society, found this 1939 high school graduation photo. It’s easy to imagine that Barker would have been handsome in uniform.

“One of our volunteers used to visit with (Dick) at the diner, but she can’t recall ever knowing where the chicken farm was, but she is asking some of the old-timers around Belle Center,” Marshall said in an email to NBC4’s Cynthia Rosi.

It’s likely the Barkers never owned the farm that White talks about in her memoirs but rented it.

“Our volunteer is also good at genealogy websites, so she did find a marriage record that on July 9, 1945, Frederick R. Barker married a Betty M,” Marshall said.

But there was a chasm between Dick and Betty. This insight comes from historical society volunteer Judy Snyder, whose husband was a child when White and her husband called round.

“Bud had brought along his pet raccoon, and it relieved itself on Betty’s shoulder during the visit,” Snyder said.


PHOTOS: Betty White through the years

White had married an airman called Dick, only to find he was just a country boy named Bud — with a chicken farm and a pet raccoon.

The actress soon left for her glamorous life, but Bud had come home.

Betty White through the years

State pension age rise could be brought forward – ‘A question of when, not if’ | Personal Finance | Finance

Biden calls on US to reject ‘poison’ of White…