'Best Virginia' is headed to Dayton 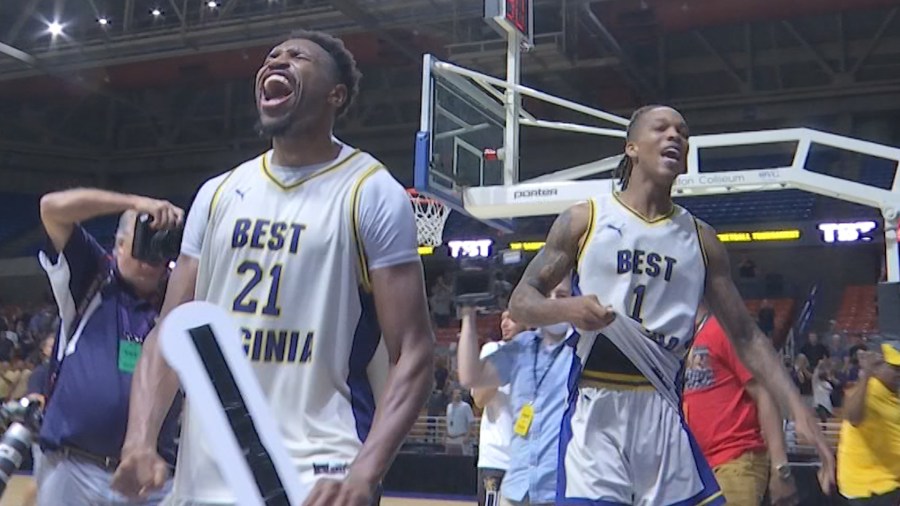 This group of WVU alum faced the group of East Tennessee alum, the ‘Bucketneers.’

The winner of this game punched their ticket to Dayton to compete in the quarterfinals of The Basketball Tournament.

It was, yet again, an electric atmosphere. We had kids chanting ‘we love you Jevon Carter’ through pretty much the entire game; the Milwaukee Bucks point guard is helping coach Best Virginia through the tournament.

We also had the Herbert Hoover girls basketball team there tonight too, cheering on the Mountaineers!

You can watch the highlights above!

Best Virginia came out strong, Jaysean Paige had the most points for BV in the first half, at eight.

It was 26-18 Best Virginia with six minutes left in the first half.

The Bucketneers started creeping back. The best shooter on the team, Desonta Bradford, had a nice dunk to try to close in on BV.

In the third quarter, Jamel Morris had it up top, a guy slid but Morris managed to lay it in for the tricky two points; he also had BV’s game winner the night before against ‘Herd That.’

We head into the fourth, some one-on-one action for Jermaine Haley, he blows past him and hits the glass for two. The score here 55-53, Best Virginia still leading.

The Bucketneers then tied it at 55 right before the Elam Ending, and we got our target score: 63.

Paige with it again, he drives, but bounces it to Kevin Jones instead. Jones with the bucket, and that wouldn’t be his last.

It’s Paige to Jones again in the paint, he turns and gets it!

Best Virginia takes down the Bucketneers, 63-62.

“I was falling down, so I was just hoping I had enough on it to get to the rim or get a foul call or something,” said Jones. “But when I saw it go in, something came over me. Joy, relief. Those Elam Endings are no joke. They could last forever in your mind, it feels like. But joy, relief. All that put together and I’m happy we’re moving to the next round. We’re not done!”

Jones does the honors of placing Best Virginia’s name in the final open spot on the West Virginia regional bracket.

“You get a build up for three weeks, so you’re ready to play that one,” said head coach James Long. “Then you play Herd That, it’s a rivalry game. Then you’re trying to play to get to Dayton. Then you’re in Dayton playing your first crazy away game, your first game in Dayton. Then you’re one game away from a million dollars. Then you’re playing for a million dollars. So every game is equal in terms of the emotions so there’s really no time for drop offs. All we’ve been saying this entire time is just be present. be here mentally, focus on what you need to execute and you’re not gonna have drop offs if you do that.”

Best Virginia will now face ‘Red Scare’, which is the Dayton alumni team, so this will be a home game for BV’s opponent.

Tip off is set for this Friday at 9pm on ESPN.

How SEO and Content Marketing Can Transform Your Business