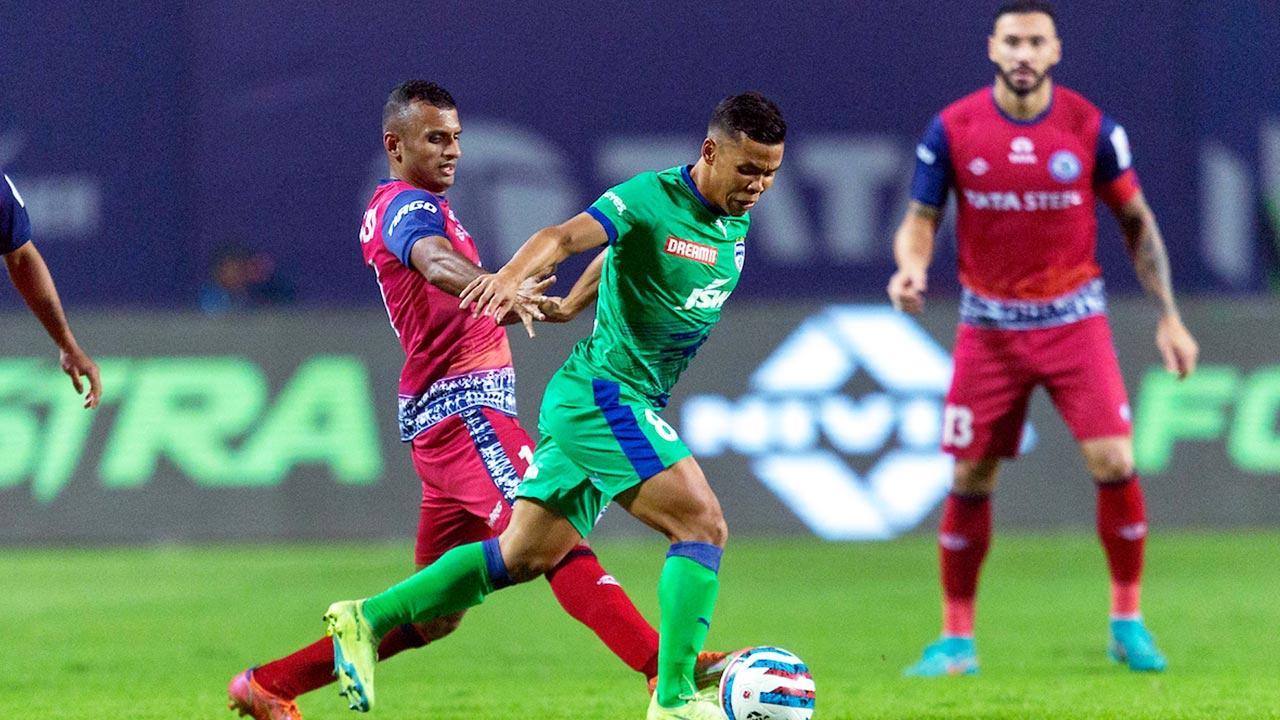 Bengaluru FC registered a third consecutive win in Matchweek 16 of the Indian Super League (ISL) 2022-23 and inched closer to the final playoff spot after beating Jamshedpur FC 3-0 at the JRD Tata Sports Complex, here on Wednesday.

The win puts them in seventh place, three points ahead of Chennaiyin FC, and just one behind FC Goa.

Rohit Kumar scored for the second game running and broke the deadlock inside ten minutes before Roy Krishna`s stunner doubled the Blues` advantage in the 34th minute. The third and final goal of the match came just after the hour-mark when Siva Narayanan unleashed a left-footed drive from the edge of the box after drifting in from the right flank.

The game got off to a bright start, with both sides treading into opposition territory and testing waters regularly. Prabir Das pounced on Krishna`s through pass down the right flank before whipping a cross towards the far post, where Rohit`s side-footed volley put Bengaluru FC in front in the eighth minute.

The Blues had to endure Jamshedpur FC`s pressure after pressing ahead. The hosts held on to the ball and probed, winning four corners in six minutes at one point. The Bengaluru FC defence was tested by Eli Sabia, Harry Sawyer and Daniel Chukwu, particularly in the air, but managed to hold on throughout a game in which Jamshedpur FC weren`t devoid of chances.

In all, Jamshedpur FC kept the ball more and made a staggering 25 attempts on goal, but managed to get only four of those on target. At the other end, Bengaluru FC showed the importance of being clinical and established a two-goal cushion just after the half-hour mark, when Krishna fired a shot from 30 yards out and caught the hosts off guard.

In the second half. Ricky Lallawmawma whipped in a pin-point cross to Sawyer, who was unmarked at the far post. The Australian headed the ball into the ground before it bounced over the bar. A little over ten minutes later, Narayanan drove the final nail in the coffin with a sublime left-footed strike.

The combination of Sandesh Jhingan and Alan Costa at the back of Bengaluru FC`s defence constantly thwarted the physical and aerial threats that were hurled at them by the Jamshedpur FC attackers, and ultimately took the Blues to their fourth clean sheet of the season.

Bengaluru FC are just a point away from sixth place, but have played one game more than FC Goa and two more than Chennaiyin FC, who are their two immediate rivals in the playoff race. The Marina Machans will be their next opponent on January 28.

Jamshedpur FC`s playoff race is all but over. The Red Miners are 11 points off the playoff zone, with only five games to go. Their next challenge will be at home against Mumbai City FC on January 27.

‘Criminal Minds’ Actress Paget Brewster, 53, Has the Most Inspiring Perspective on Aging