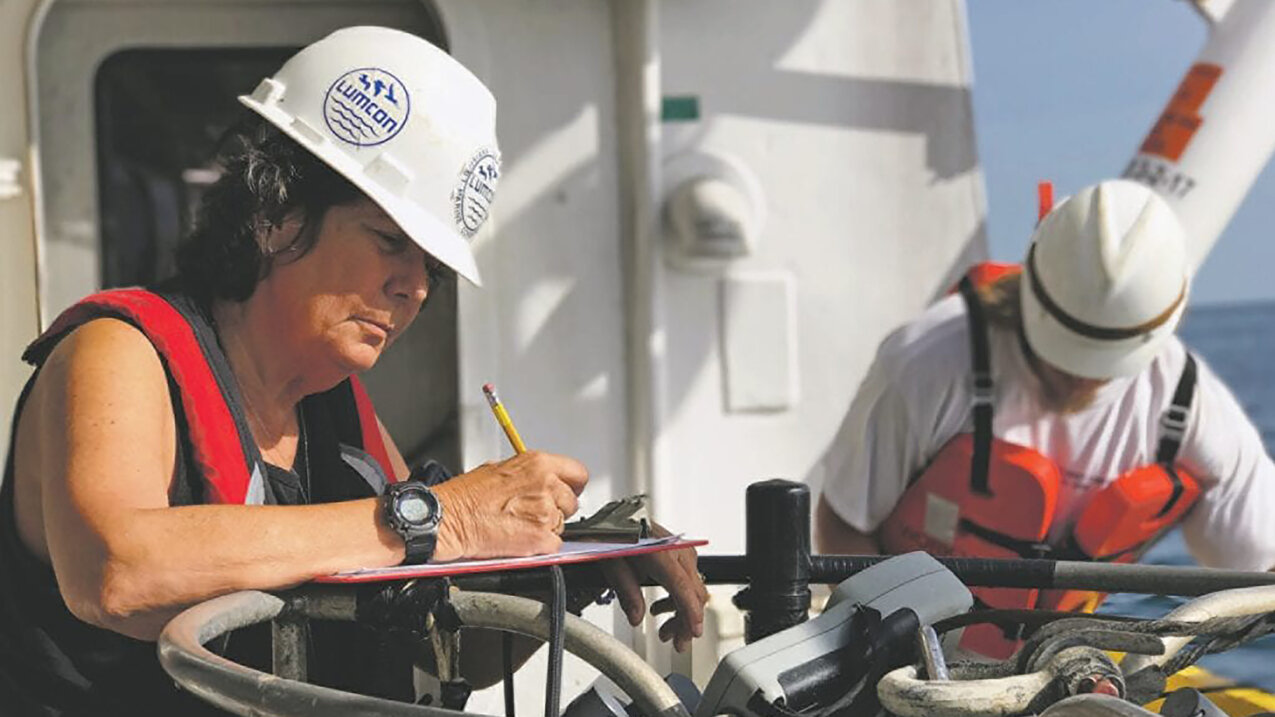 Today, NOAA-supported scientists announced that this year’s Gulf of Mexico “dead zone”— an area of low to no oxygen that can kill fish and marine life—is approximately 3,275 square miles. That’s more than 2 million acres of habitat potentially unavailable to fish and bottom species—larger than the land area of Rhode Island and Delaware combined.

The five-year average dead zone size (also known as the hypoxic zone) is now 4,280 square miles, which is over two times larger than management targets. Since records began in 1985, the largest hypoxic zone measured was 8,776 square miles in 2017.

The measurement was made during an annual survey cruise, led by a team of scientists from Louisiana State University and the Louisiana Universities Marine Consortium (LUMCON) aboard the R/V Pelican during the last week of July. The information gathered is a key metric used by the Mississippi River/Gulf of Mexico Watershed Hypoxia Task Force to measure progress toward achieving their five-year average target of 1,900 square miles or smaller by 2035. The cruise provides a one-time snapshot of the dead zone; the five-year average captures the dynamic and changing nature of the zone over time.

“Yearly measurements enable us to help decision-makers fine tune strategies to reduce the size of the hypoxic zone in these waters and mitigate harmful impacts to our coastal resources and economy,” said Nicole LeBoeuf, director of NOAA’s National Ocean Service. “While some hypoxia is natural, the size and scale of what we’ve seen here in the last several decades is unusually large and detrimental. Our measurements and analyses can empower communities to take action to protect their coasts and contribute to the region’s economic sustainability.”

In June, NOAA forecasted an average-sized hypoxic zone of 5,364 square miles, based primarily on Mississippi River discharge and nutrient runoff data from the U.S. Geological Survey. The measured size fell within the uncertainty range for the models which factors in some of the inherent environmental variability of the system such as the below average river discharge over the summer. This demonstrates the overall accuracy of the models and their ability to be applied as tools for nutrient reduction strategies.

“This summer was an unusual year for Gulf hypoxia,” said Nancy Rabalais, Ph.D. professor at Louisiana State University and LUMCON, who is the principal investigator. “The Mississippi River discharge was below the summer average. The lower flow is unable to support the normal layering of the water column, allowing dissolved oxygen from the surface waters to diffuse more easily to the seabed. The ecosystem subject to hypoxia was characterized by lower turbidity, lower algal biomass, lower nutrients and higher salinity in the surface waters.”

Each year, excess nutrients from cities, farms and other sources in upland watersheds drain into the Gulf and stimulate algal growth during the spring and summer. The algae eventually die, sink and decompose. Throughout this process, oxygen-consuming bacteria decay the algae and consume the oxygen. The resulting low oxygen levels near the bottom are insufficient to support most marine life, rendering the habitat unusable and forcing species to move to other areas to survive.

Exposure to hypoxic waters has been found to alter fish diets, growth rates, reproduction, habitat use and availability of commercially harvested species like shrimp. This year, for the first time, scientists from NOAA Fisheries and North Carolina State University began using an experimental model to better understand where shrimp could be found relative to the hypoxic zone.

Investments in understanding and addressing hypoxia

The Hypoxia Task Force is accelerating progress in reducing excess nutrients in the Mississippi/Atchafalaya River Basin by promoting collaboration among federal partners, states, farmers and other stakeholders.

“The dead zone in the Gulf of Mexico is a stark reminder that water quality and land stewardship go hand in hand,” said Environmental Protection Agency (EPA) Assistant Administrator for Water Radhika Fox. “At EPA, we recognize this and are investing $60 million through President Biden’s Bipartisan Infrastructure Law in work that states are doing to reduce excess nutrients that feed the dead zone.”

In June, the EPA announced $60 million over the next five years to fund nutrient reduction efforts through the Gulf Hypoxia Program. The funding will significantly expand and enhance the capacity of the states to improve water quality in the Gulf and throughout the Mississippi/Atchafalaya River Basin. To support the work of the Hypoxia Task Force, EPA will also deepen its existing collaborations with the agricultural community, seek new partnerships and identify and elevate examples of producer innovation.

“Hypoxia Task Force states are focused on implementing our state-based and science-driven nutrient reduction strategies and scaling up and accelerating the adoption of proven water quality and conservation practices. The addition of new partnerships with both public and private partners in both urban and rural settings will pay big water-quality dividends in the future,” said Mike Naig, Iowa Secretary of Agriculture and co-chair of the Hypoxia Task Force. “We know that innovative changes on the land lead to positive changes in the water, and these investments benefit communities across our states and our neighbors downstream. As we take on this challenge and carry out our work in priority watersheds across the Mississippi River Basin in the years ahead, we are grateful to EPA and our other partners who provide needed support for these important efforts.”