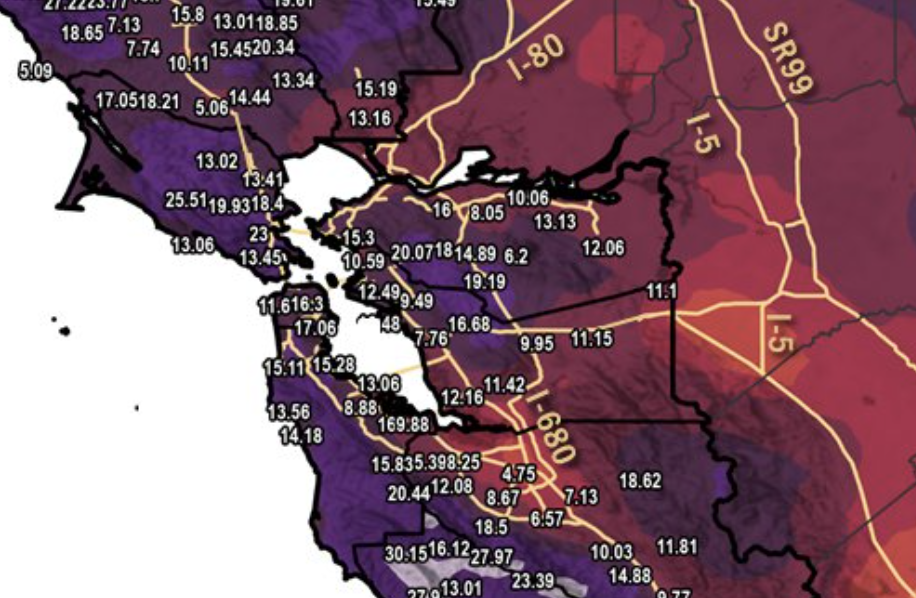 SAN FRANCISCO (KRON) — Blue skies and sunshine have returned to the Bay Area after nine atmospheric rivers rolled through. Between Dec 26, 2022 and January 17, 2023, weeks of storms left flooding and feet of snow behind, but just how much precipitation did we get? Tons, according to the National Weather Service.

Check out the rainfall totals laid out below:

Santa Cruz came in with the highest amount of rain in our area at just over 36 inches. The storms had significant impacts, causing flooding, landslides and road closures. Hwy-17 was closed due to mudslides, and Santa Cruz beaches were littered with storm debris.

Guerneville received 28.51 inches of rain during the three-week period. The nearby Russian River was considered near flood stage. In early January, Guerneville was one of the Sonoma County school districts that faced temporary closures due to the storms.

Over in the East Bay, Oakland received 18.33 inches of rainfall. Oakland broke a record for the most rain seen in a 16-day period on Jan. 11. The city faced flooding in various areas and downed trees impacted residents and kept the Oakland Fire Department busy.

More than a foot of rain fell near San Francisco International Airport. Nearby, part of the U.S. 101 freeway was so badly flooded that the roadway was closed for several hours. Drivers across California were encouraged to avoid driving through standing water, but some drivers braved it anyway. On Jan. 16, at least 25 cars were damaged after hitting a pothole leftover from the storms.

The storm has brought some good news, California reservoir levels have risen significantly since the beginning of the year. In Santa Clara County, four reservoirs began spilling over.

As the state of California dries out and takes stock of the damages, President Joe Biden has granted an expedited request for a disaster declaration from Governor Gavin Newsom. Federal assistance will now be available to qualified residents impacted by the storms which killed 20 people.

‘Teen Wolf: The Movie’ Starts Streaming Thursday and (Almost) All Your Favorite Characters Are Back