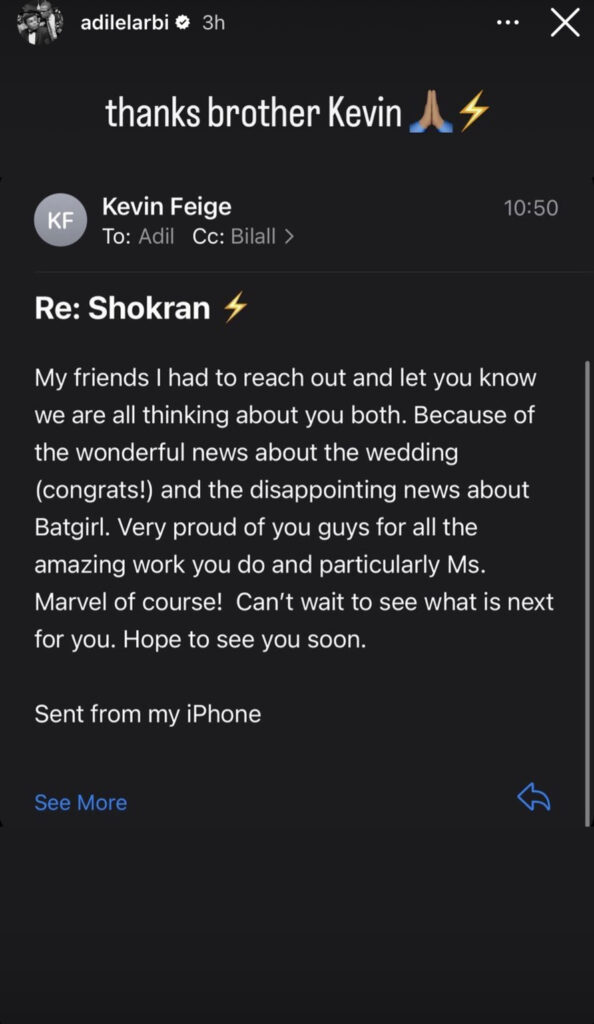 Earlier this week, Warner Bros. Discovery made the unprecedented decision of cancelling the Batgirl movie despite it being close to complete in post-production. Directors Adil El Arbi and Bilall Fallah released a statement earlier this week expressing their disappointment over the decision, and El Arbi has shared an email he received from Marvel Studios president Kevin Feige regarding the news on his official Instagram story:

Adil El Arbi also gave a shoutout to Edgar Wright and James Gunn for their support amidst the cancellation of Batgirl:

Adil El Arbi and Bilall Fallah just experienced an unfortunate event that no filmmaker would ever want to deal with. Given the scale of this creative disappointment, receiving support from not just Kevin Feige, but also Edgar Wright and James Gunn is not all that surprising, especially from Wright and Gunn. In regards to those two directors, Wright parted ways with Marvel Studios on the original Ant-Man due to creative differences, while James Gunn was temporarily fired by Disney from Guardians of the Galaxy Vol. 3, which eventually led to him writing/directing The Suicide Squad for DC Films.

Along with Batgirl, Adil El Arbi and Bilall Fallah were both involved with Marvel Studios, having directed two episodes of Ms. Marvel. The episodes received much praise, and Kevin Feige is sure thankful for their contributions to the Marvel Cinematic Universe. It will be interesting to see what the next move for the directors are. After all, they were behind 2020’s biggest box office hit, Bad Boys For Life, and will likely have the support from rival studios for any new project of their desires.

Batgirl was set to feature Leslie Grace as Barbara Gordon, as well as J.K. Simmons as Commissioner Gordon, Brendan Fraser as Firefly, and Michael Keaton as Bruce Wayne/Batman. Keaton is still set to reprise his role as his version of the Caped Crusader in the upcoming film, The Flash.

Be sure to continue following Heroic Hollywood for all the latest news from the Batgirl cancellation, the future of Marvel Studios president Kevin Feige, and more. Also, subscribe to our YouTube channel for more original video content.