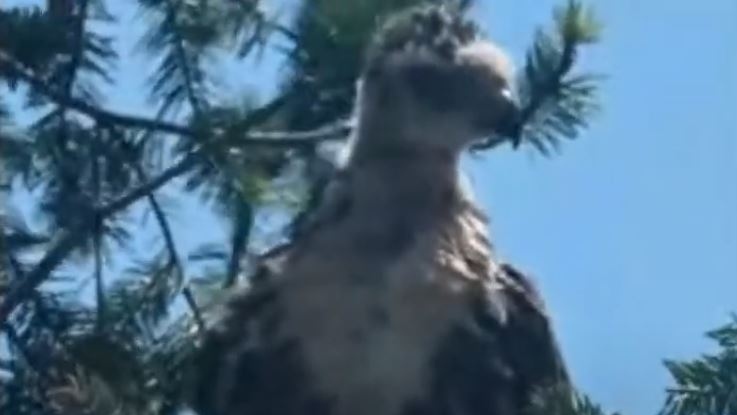 A pair of bald eagles in British Columbia have taken the extremely unusual step of adopting a baby red-tailed hawk into their nest, according to the Gabriola Rescue of Wildlife Society (GROWLS).

The birds are located on Gabriola Island, just off Vancouver Island, where the nesting bald eagles have been raising their own offspring.

Experts say the baby hawk was brought to the eagle’s nest to be used as food, and that a 24/7 camera that was set up to monitor the eagles caught the moment it happened.

However, after the baby eagles didn’t eat the hawk, the parents began to take it under their wing, both metaphorically and literally.

The baby red-tailed hawk is shown on a live camera. (Sasse Photos/YouTube)

A similar incident occurred in Sidney, B.C., in 2017. It was the first time ever that bald eagles were recorded raising a baby hawk instead of eating it in the province.

At the time, there was some debate about how that young hawk got into the eagle nest in Sidney.

The prevailing theory was that the hawk was brought to the nest to be used as prey, which seems to be the case this year.

“This should put to rest any alternative hypotheses as to how these young hawks find themselves in eagle nests,” said GROWLS in a release Friday.

In 2018, the hawk that was briefly raised by the eagles left in about three weeks and “disappeared, never to be seen again,” according to GROWLS.

Experts, including wildlife biology professor David Bird with McGill University, expect something similar to happen again. The baby red-tailed hawk will likely leave the nest on Gabriola Island sometime within the next three weeks.

Local residents and volunteers at GROWLS have taken to naming the baby hawk “Malala,” which they say means survivor.

GROWLS adds that eagles looking after hawks has only been recorded a handful of times across North America, and mostly in California.

Back in 2017, Bird told CTV News that an adoption like this had only been documented “two or three times, sort of, in the history of science.”

Finally, a Skyrim mod where you can get a good hot dog

Prodrive P25 sold out fast, has WRC bodywork and an EJ25…