Auto shows are ‘so over,’ brands want to debut luxury cars at Pebble Beach It’s fitting that organisers of the Geneva International Motor Show announced it would be canceled—for a fourth year—during Monterey car week, the annual gathering of motoring enthusiasts on the foggy peninsula region two hours south of San Francisco.

Each August, the coastal town hosts the world’s biggest live car auctions, most prestigious concours, and increasingly, its most important luxury auto debuts. This year, from Aug. 15-20, more than 20 new vehicles made their first global or North American appearance, while executives from Europe and Asia spent hours with journalists, car dealers, and VIP clients.

The consensus? This felt like a new kind of auto show.

“There’s a lot more to do at Pebble Beach; you get to see the brands in a different light,” says Alex Long, director of product and market strategy for Aston Martin, referring to the car shows, auctions, drives, and parties available to high-net-worth potential customers of the automaker.

“We don’t want to be involved in these old [-fashioned] car shows,” says Hildegard Wortmann, a member of the board of management of Audi AG. “It’s much better for us to be here.”

Covid-19 permanently changed the automotive landscape when it comes to selling cars. If this week along the Monterey Peninsula is much indication, high-end automakers are genuinely leaving auto shows behind.

“Pebble Beach is a much more modern way of getting in touch with your people,” says Thomas Ingenlath, the chief executive officer of Polestar. “Traditional auto shows? That’s so over.”

Detroit, Los Angeles, New York? Fuhgeddaboudit. This year, all the best new-car debuts are in Carmel. Here’s a rundown of the most exciting luxury car launches.

The North American debut of Alfa Romeo’s small hybrid SUV shows it to be brimming with traditional Alfa details. It has a V-shaped grille and 20-inch five-hole wheels, plus a 12.3-inch digital gauge cluster and such standard features as wireless Apple CarPlay and Android Auto. Electric-only driving promises 30 miles on a single charge. Look for it to hit American showrooms in early 2023.

This roadster honors the Aston Martin DBR1, which finished second at the 24 hours of Le Mans in 1959 and won the Nürburgring 1000 KM the same year. (That DB stands for David Brown, who owned Aston Martin from 1947 to 1972.) The DBR 22 has 705 horsepower and 555 pound-feet of torque; it’ll go to 60 mph in 3.4 seconds, with a top speed of 198 mph. It joins the Aston Martin V12 Vantage Roadster as the best from James Bond’s favorite brand this year in Monterey. The company will sell 10 of them.

Along with its previously seen concept electric vehicles, Audi unveiled the one-of-a-kind S1 e-tron quattro Hoonitron electric car, which is a modernized and electrified version of the 1985 Audi Sport quattro S1. The car was developed specifically for American professional driver Ken Block and will be featured in the next installment of his Gymkhana video series of stunt driving. The funky name refers to Block’s series of “hooligan” race cars, all with names that evoke his famously rowdy driving style. Audi says such far-fetched designs help it develop production cars, at least on the conceptual level.

This coach-built coupe follows the $2 million Bacalar Speedster in the brand’s launch of extremely limited runs of highly customized, limited run vehicles. Named after a deep crater lake in Bali, Indonesia, the vehicle has Bentley’s famous W12 engine, 22-inch wheels, and hundreds of special touches unique to this vehicle, including a controller on the center console 3D printed in 18-karat gold. Production is limited to just 18 examples, though company spokespeople say it could have sold far many more. Pricing starts at £1.65 million ($1.94 million).

BMW’s new CSL, or competition sports lightweight, model features so many modifications compared to the standard M4 sports car that its starting price is over $140,000. It offers a twin-turbo inline-six engine that gets 543hp, or 40hp more than its standard M4 Competition sibling. (It’s also 240 pounds lighter). Carbon brakes, high-performance tires and tight suspension tuning add to the track-focused car. Only 1,000 will be made.

Before you get too excited, this €5 million ($5 million) roadster is already sold out. Only 99 will be made, and deliveries will start in 2024. In case any fall through, here’s what you need to know: The W16 Mistral is named after a strong wind in France and comes with a W16 engine that gets 1,600 ps. (It’s the same unit that powered the Chiron Super Sport to 304 mph in 2019). The brand isn’t releasing exact performance figures yet, but expect the Mistral to make a run at the world record for a roadster sometime soon.

California-based Czinger has released little in specifications for its latest invention, which is powered by a hybrid V8 powertrain and has two seats placed one behind the other. Early reports put its output at more than 1,200 horsepower, a zero-to-60 mph sprint of less than two seconds, and a top speed of 253 mph. It debuted at a large party in Monterey before being shown to the public on the concept lawn at Pebble Beach.

The niche British automaker showcased its halo supercar, the T.50, along with a new T.33 coupe that runs on a specialized 3.9-liter V12 engine held by a carbon and aluminum chassis. Known for designing the McLaren F1 car and world championship F1 race cars, South African Gordon Murray has a devoted following that follows his ingenious engine designs with fervor. His latest, this 615-hp car, is limited to just 100 owners. The company also announced plans to build a new automotive center in Florida, which will support delivery and development of vehicles for customers in the US. Texas-based John Hennessey is known for going after world records, and his latest car is no different. His company says the 1,817-bhp vehicle weighs less than 3,100 pounds and is primed to exceed 300 mph. The current open-top world record belongs to the company’s Hennessey Venom GT Spyder, which hit 265.6 mph in 2016. 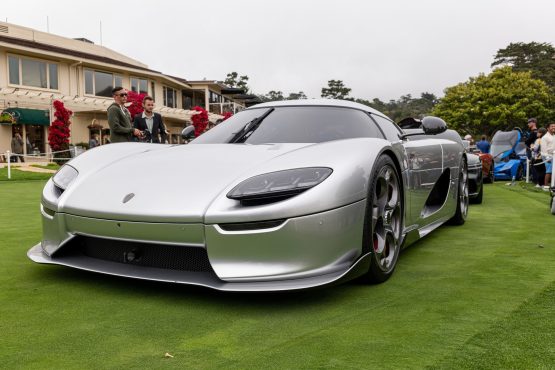 The stylish and elegant CC850 is a 1,385-horsepower coupe with a detachable hardtop and doors that open upward. Priced at $3.65 million, it is a modern take on the first production car that founder Christian von Koenigsegg ever made: the CC8S from 2002. At 104 pounds lighter than the original Urus, the highly tuned version of Lambo’s excellent, top-selling SUV boasts a 3.3-second zero-to-62 mph sprint, which is nearly a half-second faster than its sibling. Top speed is 306 kilometers per hour (190 mph). Pricing starts at $260,676, and deliveries will commence at the end of this year. Named to celebrate the 100th anniversary of Ford Motor Co.’s purchase of Lincoln, this oversized concept car is an autonomous grand tourer made to make passengers feel as if they’re in the coffer of a private jet. With no steering wheel or pedals, the car has a tiny model of itself that sits inside; customers are said to be able to use it to accelerate, stop and steer the vehicle, should the need arise. This a very futuristic idea that will not see road production, but it hints at how the company is approaching the future of transportation.

This is the first time North America’s public has been introduced to the superb MC20 sportscar. Called “Cielo”—the Italian word for sky is  pronounced like “cello,” which is fitting for an open-top car—this model has a 621 hp V6 engine and an eight-speed automatic transmission. The MC20 Cielo will hit 62 mph in 3 seconds, with a top speed near 200 mph.

The McLaren Solus GT is the real-life version of the futuristic McLaren concept car featured in the Gran Turismo Sport video game. Legal to drive only on a race track, the Solus GT comes with a top that opens like a jet canopy and a single seat that will be custom-molded to each owner’s body. Its naturally aspirated V10 engine gets 829 bhp and promises a zero-60 mph sprint time of less than 2.5 seconds. Top speed is 200 mph. Pricing is yet to be announced. 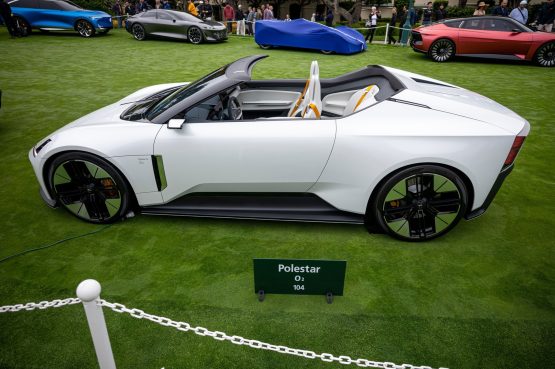 This may be today’s best-looking electric roadster. Originally known as the Polestar O2 concept, it has 21-inch alloy wheels, a 2+2 seating configuration, and a leather interior. Primed with 884 horsepower and a zero-60 mph sprint time of 3.1 seconds, top speed is 155 mph. Only 500 of the first edition model will be made. Production will start in 2026.

If Porsche made a supercar, this would be it. (Yes, we are still waiting for the 918 Spyder’s replacement.) The Porsche 911 GT3 RS is barely street legal, with 518 horsepower and a zero-60 mph sprint of 3 seconds. Top speed is 184 mph. It is made largely out of carbon fiber, with a lightweight stainless steel sport exhaust system and a rear wing so big and high that it practically needs scaffolding to hold it up. Pricing starts at $223,800. Availability is extremely limited.

Billed by the company as the “most exclusive” Range Rover ever, this Special Edition SV will indeed be a rare sight on the street. Just 17 will be made. Pricing starts at $345,000, which includes seating for four, a refrigerator and crystal glasses, two sets of golf clubs, and a blue leather interior with white ceramic controls and surfaces. It’s all covered in a signature satin-bronze paint job and 23-inch wheels painted in glossy dark gray with bronze inserts.

The Phantom Series II is the updated version of the stately pinnacle of British automaking, with new wheel options and a refreshed grille. though with the same gargantuan proportions and opulent insides as prior Phantom models. The stately sedan is meant to leverage the heritage of the historic brand while modernizing it for appeal to increasingly younger affluent customers.

RUF Project RBS, aka the Bergmeister

This odd-looking open-top model, made by the German family company,  is inspired by Porsche’s vintage race cars that specialized in hill climbs. With a body skin made from carbon fiber, LED headlights, and an entire cabin trimmed in black Alcantara, the RBS feels more modern than classic. The car comes with an air-cooled, turbocharged, 3.6-liter, flat-six engine, a six-speed manual transmission, and 450 horsepower with 442 pound-feet of torque.