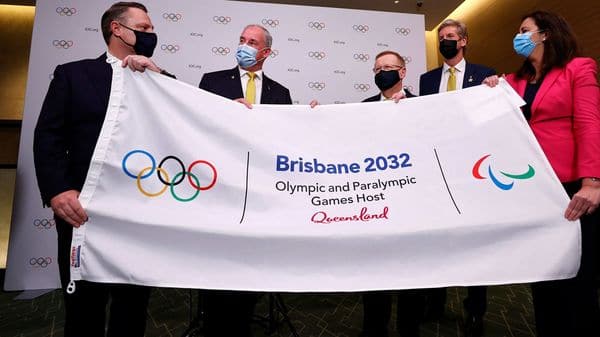 The International Olympic Committee on Wednesday awarded the 2032 Summer Games to Brisbane, Australia, after designating the city earlier this year as the sole contender.

Brisbane, about 450 miles north of Sydney, will become the third Australian city to host the Games after Melbourne in 1956 and Sydney in 2000.

It is the first Olympic host to be selected under a new system that removes competitive bidding, a shift designed to reduce campaign costs and potential vote-buying.

Brisbane is the capital of Queensland state and has targeted sports events as a way to give it a bigger global profile after being overshadowed by Sydney and Melbourne. The city, which has a population of 2.56 million, hosted the Commonwealth Games three years ago. The IOC said that gave it confidence Brisbane had the transport infrastructure to host the Olympics.

The Games are tentatively set for July 23 to Aug. 8, 2032, the same dates on the calendar as this year’s Tokyo Olympics, which begin Friday.

Tokyo won the right to host the Games in 2013 under the traditional process in which it competed against other cities to win a closely fought final vote by IOC members. Tokyo beat out Istanbul and Madrid.

French authorities have investigated whether a former president of the Japanese Olympic Committee was involved in bribing African countries to back Tokyo’s bid. The official has denied wrongdoing.

The IOC decided in 2017 that Paris would host the 2024 Summer Games and Los Angeles would host in 2028, completing an unprecedented arrangement under which the IOC named both sites at once.

The Brisbane Games will take place during Australia’s winter, with temperatures in the city typically peaking around 75 degrees Fahrenheit. The IOC said in February that these were favorable conditions for athletes. Temperatures topped 90 degrees in Tokyo on Wednesday and are expected to remain high throughout the Games.

Previous Olympics have been criticized for leaving host cities with large debts and underused facilities. IOC President Thomas Bach said the IOC wanted to encourage Olympic projects which use a high percentage of existing and temporary venues.

One of the Olympic world’s most powerful officials is Australian John Coates, who has led his country’s Olympic committee since 1990, serves as the IOC’s liaison to the Tokyo Games and is president of the Court of Arbitration for Sport, a Switzerland-based body that adjudicates matters such as which athletes are allowed to compete in the Olympics.

Mr. Coates was part of Brisbane’s failed bid for the 1992 Games, which went to Barcelona, and helped land the 2000 Games for Sydney. The IOC has said Mr. Coates recused himself from decisions related to the 2032 Brisbane Games.

Brisbane’s pitch for the Games involved a commitment that 84% of venues are already built or will be temporary. Some existing venues, including the Gabba cricket ground, will be renovated.

The Queensland state government estimates that hosting the 2032 Games will boost the state’s economy by 4.6 billion Australian dollars, or $3.36 billion, through increased tourism and trade.

Brisbane’s selection was greeted with fireworks and cheers on the city’s waterfront, even as most people who gathered to hear the IOC’s decision wore face masks. Although small by global standards, recent outbreaks of the Delta variant of Covid-19 have led to lockdowns in some Australian cities, including Sydney.

“All Queenslanders can be proud of this historic moment,” tweeted Annastacia Palaszczuk, Queensland’s premier.

Denial of responsibility! My droll is an automatic aggregator of the all world’s media. In each content, the hyperlink to the primary source is specified. All trademarks belong to their rightful owners, all materials to their authors. If you are the owner of the content and do not want us to publish your materials, please contact us by email – admin@mydroll.com. The content will be deleted within 24 hours.
2032 Summer GamesAustraliaBrisbaneolympics
0
Share