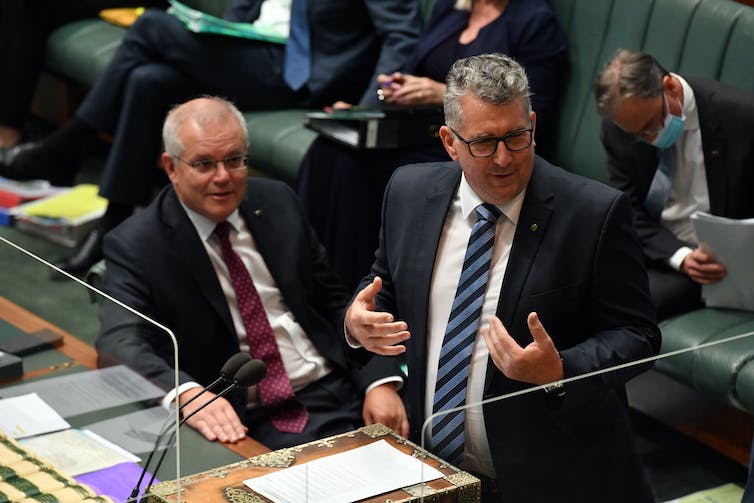 As bad as it is, Scott Morrison’s surreptitious circumvention of Australia’s parliamentary and Cabinet processes might have got worse.

Had the former prime minister been re-elected, it is reasonable to assume he would have continued to mislead his Cabinet, the parliament and the public after amassing multiple reserve powers.

He may even have extended his undeclared reach, further weakening a gullible Cabinet that had all but surrendered its judgment to him since the so-called “miracle” election win of 2019.

Fronting reporters on Wednesday, Morrison provided no substantial acceptance of wrong-doing, no viable pretext for his secrecy. He also did not provide a reason for his wilful debasement of the principle of collective Cabinet decision-making.

Many voters will now be deeply concerned that Morrison was not dissuaded from his dangerous fantasy by the governor-general, who gave these novel arrangements his imprimatur.

The cost of Morrison’s excess and the governor-general’s apparent incuriosity is a sharp decline in public confidence.

Questions must now be asked about the durability of time-honoured Westminster conventions, as conservatism – the most successful political brand in Australia electorally speaking – succumbs to the same radical urges as like-minded parties abroad.

Read more:
Morrison’s multiple portfolios: why the law has nothing to do with it


These questions go to the ease with which Morrison side-stepped usual transparency requirements, which are critical in delimiting executive power.

And they go to the special forms of confidence that bind ministers of the Crown to act honourably. This includes an obligation to resign when that confidence has been compromised.

The case of Resources Minister Keith Pitt highlights this cynical fracture. Pitt’s deliberative ministerial power was superseded by the prime minister, who had secretly acquired the joint commission for his resources portfolio.

This aggressive act amounted to a prime ministerial statement of no-confidence. Ordinarily, that would trigger the minister’s immediate resignation.

It is worth noting that had Pitt then resigned, the whole issue of Morrison’s phantom cabinet would presumably have been exposed and dealt with at the time.

According to former Howard government minister Amanda Vanstone, knowledge of Morrison’s secret commissions would have prompted censure of the prime minister and possible dismissal.

Beyond the public governance failures of this bizarre controversy lie the wan political responses on the Coalition side. These we can view on the one hand as questions of ideology, and on the other as tactical matters. The latter being calculations over how to limit brand damage and avoid a difficult byelection.

Governing is inevitably a mix of these influences. But how they are balanced when fundamental values are at stake provides a moral health check of a government.

Internally, considerations range from the shallow, such as how to avoid giving the new Labor government a political boost, to deeper judgments about whether the Coalition parties should be seen to prioritise public confidence in the Constitution, the Crown and the primacy of Parliament over their own short-term popularity.

So far, former ministers, with the notable exception of Karen Andrews, have been loath to fully condemn Morrison’s behaviour.

It reveals that mutually observed Westminster norms specifically designed to vouchsafe good-faith governance have become, like the duplicated ministries of Morrison’s phantom Cabinet, mere guidelines to be obeyed only when they do not inhibit the pursuit and retention of power.

For a stream of political thought quick to invoke flag and country, this breezy subjugation of the national interest to selfish political equities represents an obvious contradiction.

Australian conservatives are hardly unique in this regard. Across the democratic West, disregard for long-agreed ethical and procedural standards has become commonplace as hyper-partisanship and populism supplant foundational tenets of conservatism. These include honour, respect, due process and an insistence that social change should only ever be gradual.

Cheney was junked by her Trump-enthralled GOP this week after taking a leading role in the January 6 insurrection hearings. There she declared:

I say this to my Republican colleagues […] there will come a day when Donald Trump is gone, but your dishonour will remain.

Andrews, as one of the ministers secretly duplicated by Morrison, has so far been the only LNP frontbencher to call on Morrison to quit politics, declaring “the Australian people were betrayed”.

I think the actions that he undertook in swearing himself in to numerous portfolios and not disclosing those to the ministers responsible means that he needs to resign and he needs to leave Parliament.

Obviously I don’t agree with the prime minister taking on roles here, there and everywhere, I believe in a cabinet system of government […] but Mr Morrison has not broken any law.

The elevation of Morrison’s former political adviser and one-time chief of staff, Phil Gaetjens, to the role of Secretary of the Department of Prime Minister and Cabinet is a symptom of the tendency to put political considerations above due process.

Morrison’s insistence he acted on advice from his department has to be viewed in this light.

While it is unclear what that departmental advice stated, senior public servants, speaking on the condition of anonymity, confirm PM&C’s Governance Division would almost certainly have advised publicising any new ministerial commissions to ensure public awareness and parliamentary accountability.

Read more:
Grattan on Friday: The Scott Morrison horror show has a way to run yet


That this advice was either not given or not taken as authoritative is of concern.

Even before the scandal, The Australian’s Greg Sheridan wrote, in a piece headlined “Liberals have lost the plot amid global crisis of the right”, that it had become difficult to know what the Coalition parties believed.

An admirably direct critic of the conservative tradition from within, Sheridan describes an “intellectual vacuum across the Australian political right”, calling it the “greatest long-term threat to the Libs and the Nats”.

As shocking at Morrison’s behaviour was, the reluctance of the Coalition parties to unequivocally condemn it may inflict even greater long-term damage to the conservative cause.