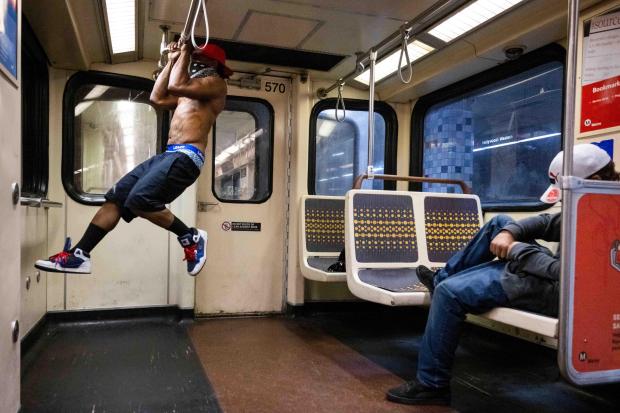 The vast majority of riders who called in to an LA Metro telephone town hall meeting Tuesday night, Jan. 17, spoke about violence, sexual activity, feeling unsafe and poor service on the agency’s system of trains and buses running throughout Los Angeles County.

What was supposed to be a meeting on spending priorities for next year’s Metro budget was mostly about issues of crime, safety and cleanliness. A computerized system dialed 100,000 phones. Of those called 10,389 people participated, said Metro spokesman Patrick Chandler, in an email.

In the hour-long meeting, callers using only first names ticked off specific problems they’ve witnessed. Their remarks were followed by responses from Metro staff members, The following is a sampling of that back and forth:

•  A male caller who was not identified said he and his wife saw a man enter the bus brandishing a knife. Another man masturbated in front of them, he said. Gina Osborn, Metro chief safety officer, said she would report the incident to the transit agency’s law enforcement partners. “I’m sorry your wife had to see that,” she said.

• Sequoia said that when she waits at a bus stop, or when a bus is canceled, she can wait an hour or even two for the next bus to arrive. Conan Cheung, Metro’s chief operations officer, said the problem with canceled buses stems from not having enough bus drivers. “We are having a hard time hiring enough operators to fill all the assignments,” he told the caller. “We expect to see cancellations decrease on our system in this new year.”

Metro, which in April 2021 had a shortage of 800 bus operators, has been making progress in hiring, Cheung said. Robert Bonner, chief people officer, told a caller with a similar question that the agency recently brought in 380 bus operator candidates. They must pass written and road tests in order to qualify for the job. The next hiring event is Feb. 25 at El Camino College. To apply, go to metro.net/careers, he said.

• Maria in Los Angeles said that a train station near her home is simply too scary to use. “It is too dangerous for adults. And I’m concerned about children as well,” she said. Osborn said the agency is increasing security. She suggested that anyone who sees something suspicious should download the LA Metro Transit Watch app on their smart phone. Riders can use it to send a text message or call to contact Metro security.

• Sandra, a volunteer at the Koreatown Senior Center, asked for covered bus shelters with seats to keep seniors out of the sun in hotter months. The city of Los Angeles is responsible for bus shelters in L.A., and Metro is working with the city to roll out a new bus shelter contractor, said Joe Forgiarini, senior executive officer of service development, scheduling and analysis.

Metro launched supplemental safety protocols last year, including teams that survey a train or bus line for a week and report findings to security. Also, Metro has trained 18 security officers in the use of Narcan, a nasal spray that  can reverse the effects of an opioid overdose.

When Lorraine of South Los Angeles asked if security is present on all buses, Osborn said no, the agency is selective because it cannot cover all 2,400 buses. But Los Angeles County Sheriff’s deputies and Los Angeles Police Department officers board buses every day, Osborn said.

The agency last year increased spending by 9.7% to clean buses, trains and stations. Callers were asked to use their phones to note if they had seen cleaner Metro facilities. The survey found 54% saw no improvements while  22% said the buses were cleaner; 16% said the trains were cleaner; and 7% said the stations were cleaner.

“We know there is still a lot more Metro needs to do,” said CEO Stephanie Wiggins during the call-in. She acknowledged that homelessness, cleanliness and safety on trains and buses are still riders’ top issues.

The agency has an $8.8 billion budget that runs through June 30. Metro carries about 800,000 boardings daily on seven rail lines and 2,400 low-emission buses and is nearly finished building a new rail line — the Regional Connector in Downtown LA — and extending the D (Purple) Line to Westwood, while planning several new transit lines.

The first telephone “town hall” on budget priorities took place in October 2022. This week’s was the second. A third is set for March. Also, the Metro Board of Directors will hold a required public hearing in May when a vote on the next budget is scheduled. The budget will cover the period from July 1, 2023 to June 30, 2024.

Comments can be emailed to: [email protected]