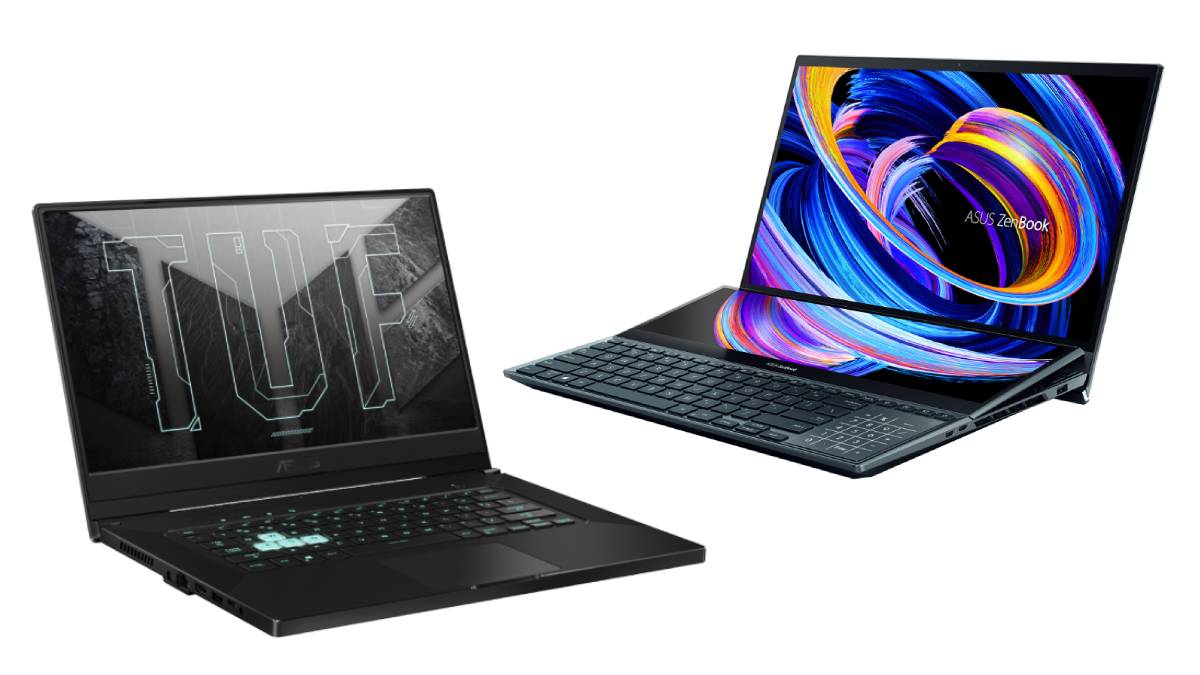 One day after unveiling its ROG gaming lineup, Asus has announced its 2021 lineup of premium ZenBook and VivoBook laptops, along with another entry-level gaming model under its TUF banner. The new laptops were shown off at a virtual CES 2021 briefing and include refreshes to the previous flagship ZenBook Duo 14 and ZenBook Pro Duo 15 models, plus the more mainstream VivoBook S14. Asus has used Intel’s latest 11th Gen ‘Tiger Lake’ CPUs and Nvidia GeForce RTX 30-series mobile GPUs, and the new lineup also includes Intel Evo certified designs. Prices and details of their availability in India aren’t known yet, but based on past experience, all these new laptops should come here relatively soon.

The new TUF Dash F15 is designed to be slim and portable, and Asus says it’s 10 percent smaller and 14 percent lighter than the previous generation. At under 20mm thick, it features a new aesthetic and will be available in Moonlight White and Eclipse Grey. Asus has used new 11th Gen Intel H-series CPUs and up to an Nvidia GeForce RTX 3070 GPU. There’s up to 32GB of DDR4 RAM and a 1TB SSD, both of which are upgradeable. The 15.6-inch screen has up to a 240Hz refresh rate and narrow borders. Asus claims over 16 hours of battery life, plus fast charging and Type-C charging. The new TUF Dash F15 has two newly designed self-cleaning fans and an anti-dust design.

The flagship ZenBook Pro Duo with its huge ScreenPad+ second screen now gets an automatic tilting mechanism to improve airflow and usability. The main 15.6-inch screen is now a 4K HDR OLED panel. On the inside, you get up to an 11th Gen Intel Core i9 CPU, Nvidia GeForce RTX 3070 GPU, up to 32GB of RAM, and a 1TB PCIe SSD. There’s also Thunderbolt 3 and Wi-Fi 6. Updated software makes the second screen better for productivity and multitasking, particularly in content creation software.

The more portable ZenBook Duo 14 has also been updated with the same auto-tilt mechanism for the ScreenPad+ secondary display. It is built around 11th Gen Intel Core CPUs with an Intel Evo badge. You get integrated Intel Xe graphics or an Nvidia GeForce MX450 GPU. It promises 17 hours of battery life plus Type-C charging through its Thunderbolt 4 ports. Of course it has the same software improvements as its larger sibling. Check out our first impressions of the 2021 ZenBook Duo 14 here.

The new ultraportable VivoBook S14 is also an Intel Evo certified design with an all-metal body and unique Deep Green colour with yellow accents. It’s 15.9mm thick and weighs 1.3kg. The 14-inch full-HD display has narrow borders, and Asus claims 17 hours of battery life. You get a choice of 11th Gen Intel Core CPUs with integrated Intel Xe graphics, up to 16GB of RAM and 1TB of storage, a fingerprint sensor, and virtual numberpad integrated into the trackpad.

New launches in Asus’ commercial PC lineup for business users include the ultraportable 0.88kg ExpertBook B9, which promises up to 20 hours of battery life with an 11th Gen Intel Core vPro CPU, Intel Xe graphics, up to 32GB of RAM, and dual SSDs in RAID. The ExpertBook B1 is a more mainstream model with up to an Nvidia GeForce MX330 GPU, while the ExpertCenter D7 SFF is a compact desktop PC with up to a 3TB hard drive plus a 2TB SSD, and Nvidia Quadro P620 GPU. The Asus BR1100F 2-in-1 and and BR1100C laptop are ruggedised entry-level options for the education market. Asus also launched three Intel and AMD-based Chromebooks, the Chromebook Flip CX5, Chromebook CX9, and ChromeBook Flip CM5.

Other products and accessories

Asus had a slew of other products to show off, including the ProArt Display PA148CTV, a 14-inch multi-touch full-HD IPS portable monitor to help creative professionals be more productive; the ProArt Display PA329CV 32-inch 4K HDR monitor with colour calibration; the coffee-cup-sized ZenBeam Latte L1 wireless projector with built-in speakers; the ZenScreen MB16ACV, a 15.6-inch portable monitor with an antibacterial treatment; and the Asus Zen AiO 24 all-in-one desktop PC.

As for networking, Asus has introduced multiple new routers, mesh routers and network adapters for Wi-Fi 6 and 6E. There are also new graphics cards based on Nvidia’s just-announced GeForce RTX 3060 GPU, and a plug-in PCIe AI accelerator card

Covid-19: Vaccinations in Delhi to start at 89 booths

A Doomed Arctic Expedition, Number-Free Math and Other New Books to Read | History