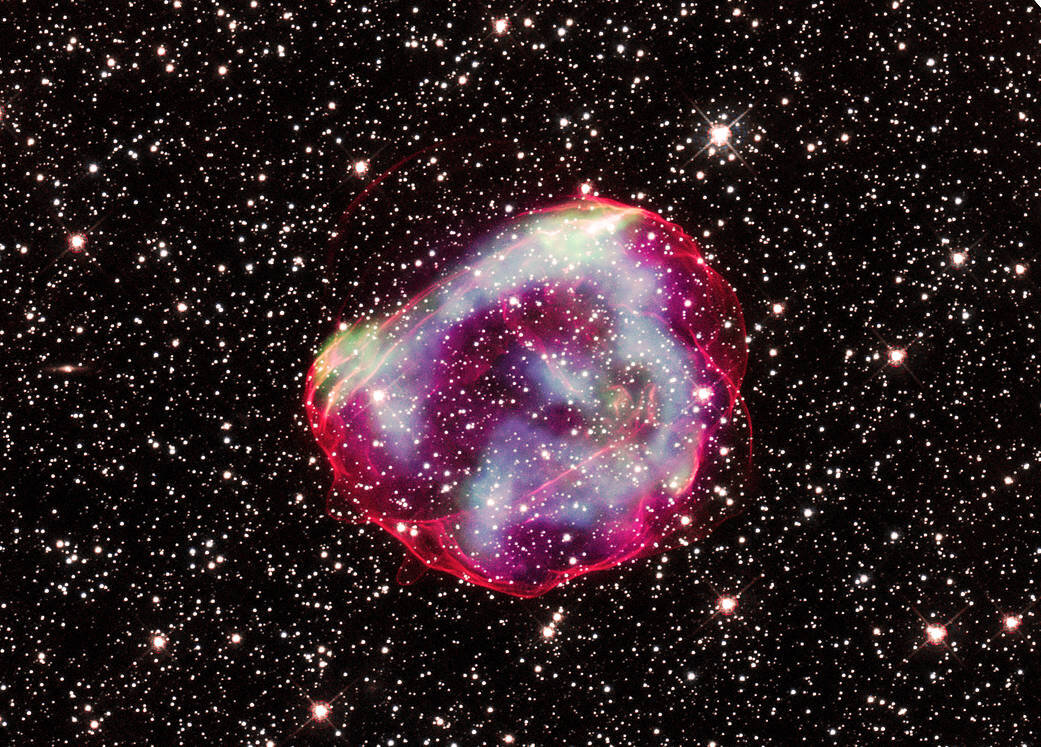 While astronomers have seen the debris from scores of exploded stars in the Milky Way and nearby galaxies, it is often difficult to determine the timeline of the star’s demise. By studying the spectacular remains of a supernova in a neighboring galaxy using NASA telescopes, a team of astronomers has found enough clues to help wind back the clock.

The supernova remnant called SNR 0519-69.0 (SNR 0519 for short) is the debris from an explosion of a white dwarf star. After reaching a critical mass, either by pulling matter from a companion star or merging with another white dwarf, the star underwent a thermonuclear explosion and was destroyed. Scientists use this type of supernova, called a Type Ia, for a wide range of scientific studies ranging from studies of thermonuclear explosions to measuring distances to galaxies across billions of light-years.

SNR 0519 is located in the Large Magellanic Cloud, a small galaxy 160,000 light-years from Earth. This composite image shows X-ray data from NASA’s Chandra X-ray Observatory and optical data from NASA’s Hubble Space Telescope. X-rays from SNR 0519 with low, medium and high energies are shown in green, blue, and purple respectively, with some of these colors overlapping to appear white. Optical data shows the perimeter of the remnant in red and stars around the remnant in white.

Astronomers combined the data from Chandra and Hubble with data from NASA’s retired Spitzer Space Telescope to determine how long ago the star in SNR 0519 exploded and learn about the environment the supernova occurred in. This data provides scientists a chance to “rewind” the movie of the stellar evolution that has played out since and figure out when it got started.

The researchers compared Hubble images from 2010, 2011, and 2020 to measure the speeds of material in the blast wave from the explosion, which range from about 3.8 million to 5.5 million miles (9 million kilometers) per hour. If the speed was toward the upper end of those estimated speeds, the astronomers determined that light from the explosion would have reached Earth about 670 years ago, or during the Hundred Years’ War between England and France and the height of the Ming dynasty in China.

However, it’s likely that the material has slowed down since the initial explosion and that the explosion happened more recently than 670 years ago. The Chandra and Spitzer data provide clues that this is the case. Astronomers found the brightest regions in X-rays of the remnant are where the slowest-moving material is located, and no X-ray emission is associated with the fastest-moving material.

These results imply that some of the blast wave has crashed into dense gas around the remnant, causing it to slow down as it traveled. Astronomers may use additional observations with Hubble to determine more precisely when the time of the star’s demise should truly be set.

A paper describing these results was published in the August issue of The Astrophysical Journal, and a preprint is available online.

Image: Hubble captures the shredded remains of a cosmic explosion

Citation:
Astronomers wind back the clock to determine the timeline of a stellar explosion (2022, September 12)
retrieved 12 September 2022
from https://phys.org/news/2022-09-astronomers-clock-timeline-stellar-explosion.html

Unsung heroes: Moderators on the front lines of internet safety