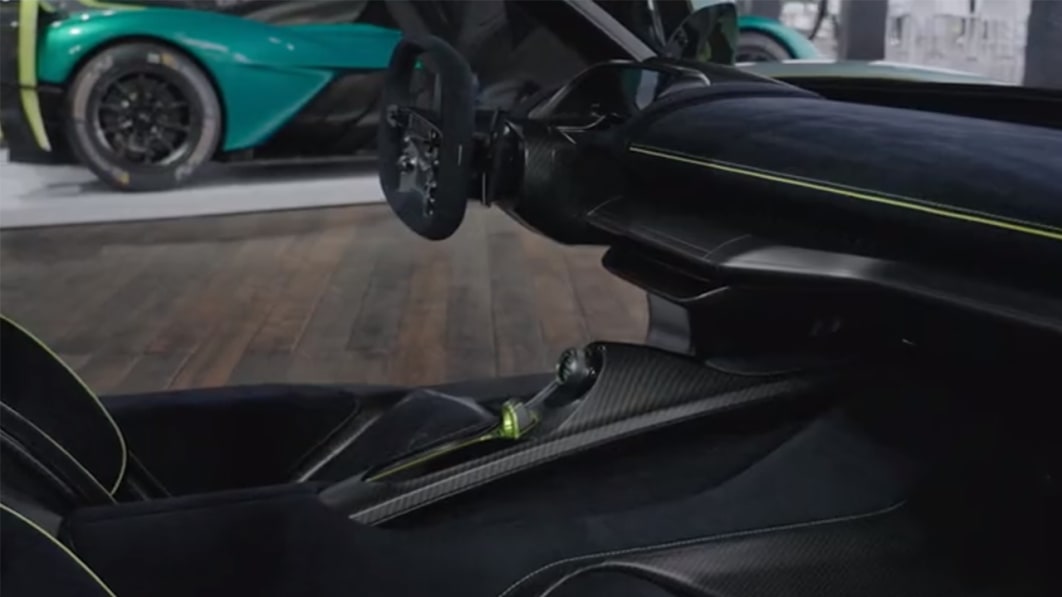 Aston Martin began releasing estimated specs for the Valhalla supercar last summer. The figures described the thoroughly overhauled car, redrawn with just as dramatic yet smoother lines than the original concept from 2019, and repowered with a plug-in hybrid V8 sourced from technical partner Mercedes-Benz instead of the in-house straight-6. The quick summary describes a mid-mounted 740-horsepower flat-plane-crank V8 with an e-motor in back and another in front contributing 201 horsepower. The front electric motor can pull the coupe for up to eight miles of pure electric running, reversing is also done under electric power, not via the eight-speed dual-clutch transmission. Curb weight of 3,417 pounds pairs with a top speed of 217 miles per hour, the firm hoping its charge can lap the ‘Ring in 6:30, which would be a record for a production car. Deliveries are expected to commence toward the end of next year.

We still hadn’t seen the inside of the car last summer, though. Aston Martin finally lifted the dihedral doors on the show inside during the recent Monterey Car Week. Chief Creative Officer Marek Reichman described the cockpit as being “pure,” “about driver focus” and “concentration,” and “dedicated to the mastery of driving.” So despite an exterior update that injected “a more mature” road-going road ambience into the Valhalla’s silhouette, the cabin makes strong ties to the F1-inspired and track-consuming Valkyrie. These are seats that emphasize the “bucket” in “bucket seats,” supporting driver and passenger such that their heels lie above the level of their hips. The driver grabs a square wheel that’s jettisoned the central display in the Valkyrie’s square wheel. In fact, for those decrying the explosion of screens lately, here is your safe space. A slim rectangle ahead of the driver serves as dash display, and the infotainment screen can be hidden away, which it is in the short Twitter vid. We can see it staying stowed more often than not, in fact. Even if the V8 doesn’t pour its 7,200-rpm flat-plane note into the cabin — along with roof scoop inhalations and rubber-band-thin Michelin thrumming — the passenger quarters cannot be the kindest space to design a stereo for.