Asian stocks rise with crude amid China optimism before holiday 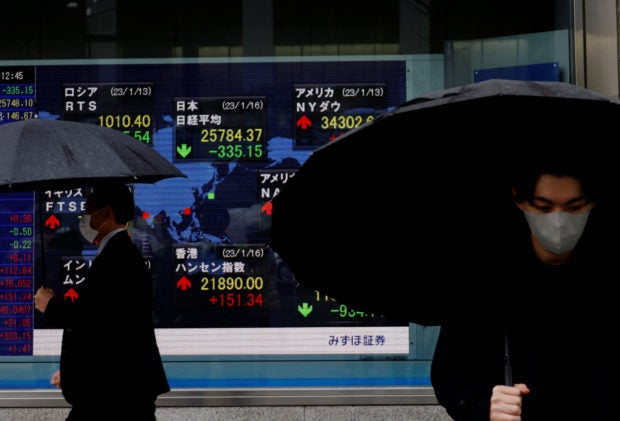 At the same time, the U.S. dollar edged up from near its weakest since May and Treasury yields were elevated as investors weighed the outlook for further Federal Reserve policy tightening and the associated risks of a global recession.

Asian markets rose despite a selloff on Wall Street overnight, with the S&P 500 losing 0.76 percent. E-Mini futures indicated a small bounce at the reopen though, gaining 0.2 percent.

Chinese Vice Premier Sun Chunlan, who oversees the country’s virus response, said the outbreak was at a “relatively low” level, state media reported late on Thursday, ahead of a mass migration of people for the week-long Lunar New Year holiday.

Weekly jobless claims were lower than expected, pointing to a tight labor market.

Boston Fed President Susan Collins said the central bank would probably need to raise rates to “just above” 5 percent, then hold them there, while Fed Vice Chair Lael Brainard said that despite the recent moderation in inflation, it remains high and “policy will need to be sufficiently restrictive for some time”.

“The labour market is just a little too hot to back off,” Sycamore added.

The market expects the policy rate will be just below 5 percent in June, implying just over 50 basis points of additional tightening.

“I’d argue the market has moved on, feeling confident we’re close to an end in the hiking cycle and the debate – certainly in the U.S. – is whether the Fed will start to cut from Q3,” Chris Weston, head of research at Pepperstone, wrote in a note. “USD remains heavy (but) clients are not convinced and the skew in positioning is for the USD to bounce.”

The dollar index – which measures the greenback against six peers, including the euro and yen – edged 0.14 percent higher to 102.17, adding a bit more distance from the 7-1/2-month low of 101.51 reached on Wednesday.

The benchmark 10-year Treasury yield was around 3.415 percent after bouncing off the lowest since mid-September at 3.321 percent overnight.

Equivalent JGB yields slipped half a basis point to 0.4 percent, hovering around that level since getting knocked back from above the BOJ’s 0.5 percent policy ceiling on Wednesday, when the central bank refrained from further tweaks to its yield curve controls.