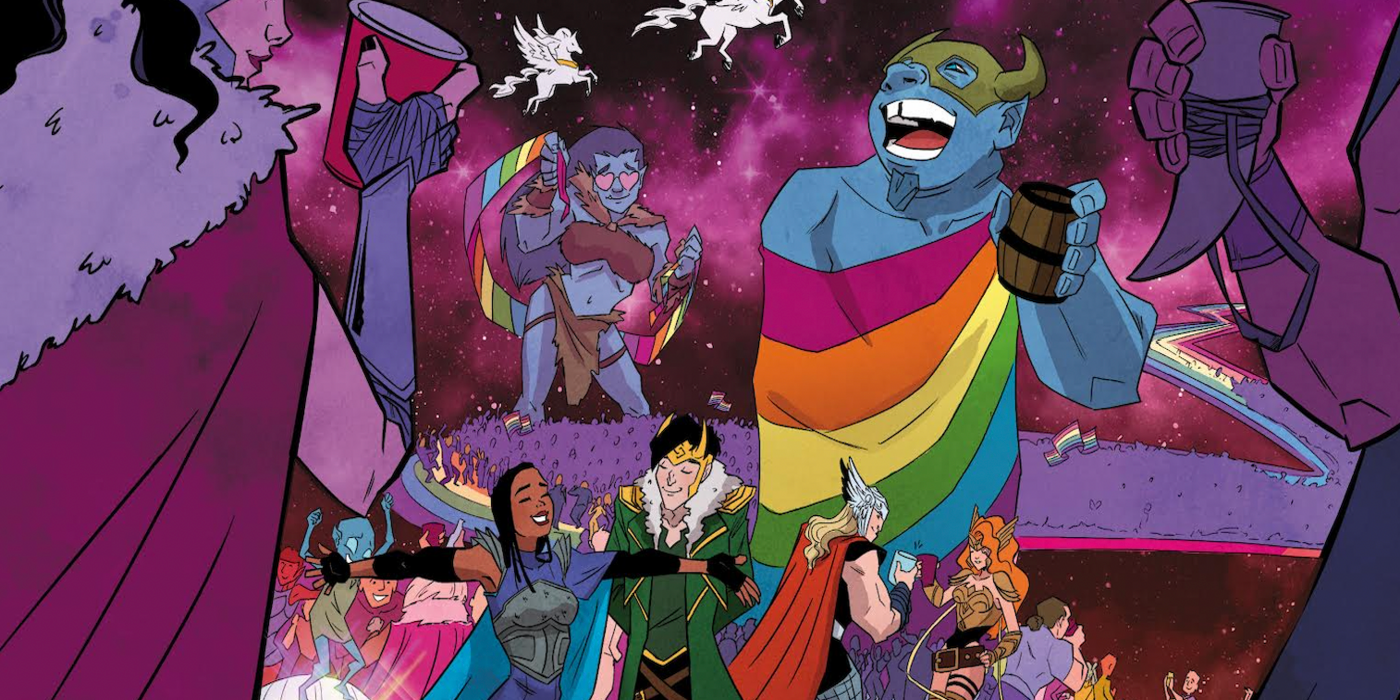 Marvel released new details about the upcoming Marvel’s Voices: Pride #1, a giant-sized queer-centered anthology highlighting LGBTQIA+ creators and characters within the Marvel Universe. The one-shot will feature eight different stories and an introduction from Bad Robot Production’s Vice President of Television Alex Philips and more. The Rúna-starring story, “Over the Rainbow,” comes from writer and podcaster Ira Madison III and artist Lorenzo Susi. “The Valkyries are bad bitches and Runa should become a Marvel icon,” Madison stated. “Plus, I’ve always wanted to write for the Loki and Thor (the Goofus and Gallant of Marvel), and who doesn’t love Pride???” Susi added, “It was a great experience and really exciting to make my debut in Marvel’s Voices: Pride #1. As a member of the LGBTIQA+ community, it means a lot to me and getting the chance to draw the first Pride celebration in Asgard was crazy. I liked that it was Rúna, a character I fell in love with at first sight, to start the rainbow celebrations in distant Asgard. That’s all I could ask for.”

Marvel’s Voices: Pride #1 will also introduce readers to Escapade, an all-new trans mutant, in a story by writer Charlie Jane Anders and artists Ro Stein and Ted Brandt. “I have loved the Marvel Universe for as long as I can remember, and may or may not sing the Spider-Man cartoon theme in the shower on a regular basis. So I was so thrilled to be able to introduce a brand-new hero to stand alongside all of my favorites,” Anders shared. “I hope that Escapade and Morgan Red will inspire trans and non-binary people everywhere to believe that they, too, can fight for justice with the power of creativity and chosen family.”

Additional stories within Marvel’s Voices: Pride #1 include an action-packed adventure starring power couple Hercules and Marvel Boy from Andrew Wheeler and Brittney L. Williams, a Moondragon-centered tale from Christopher Cantwell and Kei Zama, a Young Avengers reunion from Alyssa Wong and Stephen Byrne, a D-Man entry focusing on the power of responsibility from Grace Freud and Scott B. Henderson and a look at the legacy of two Black Panther characters, Taku and Venomm, from Danny Lore and Lucas Werneck.

Brandon Schreur is a comics news editor for CBR, joining the team in February of 2022. Based out of Michigan, the man has a passion for pretty much all things pop culture. Comics? Loves them. Movies? Seen way too many. TV shows? Can binge-watch just about anything in insane amounts of time. Getting to write about all those interests for CBR? He’s living the dream. You can follow him on Twitter at @brandonschreur.

The ABCs of being financially savvy