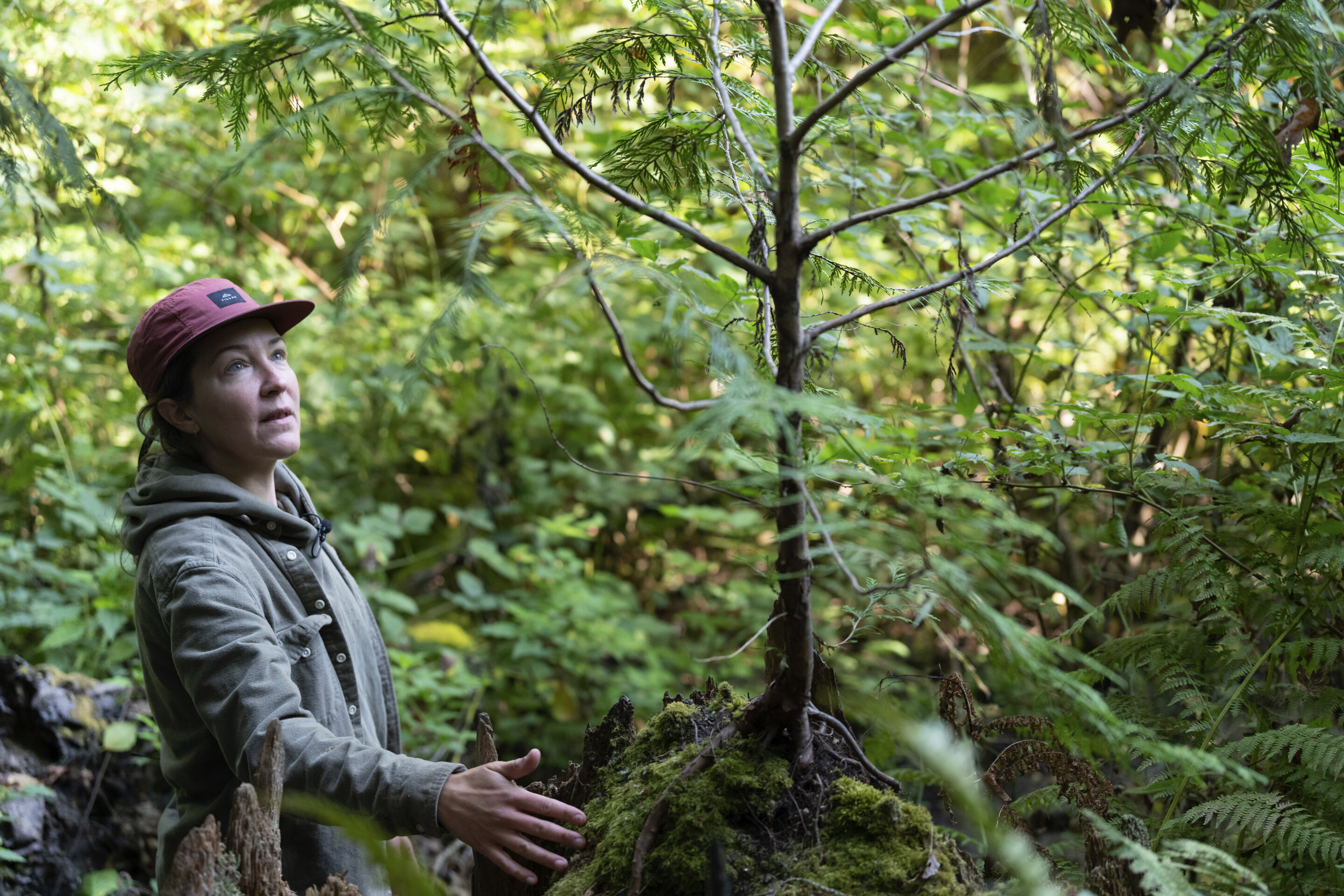 As the driest summer in Seattle’s record books ended, trees across the city were sounding silent alarms.

It was the latest in a string of Seattle summers in the last decade, including a record-breaking heat dome in 2021, to feature drier conditions and hotter temperatures that have left many trees with premature brown leaves and needles, bald branches and excessive seeding –- all signs of stress.

“You see it in big leaf maples and hemlocks, just loaded with cones or seeds, it’s kind of their last-ditch effort to reproduce,” said Shea Cope, an arborist at Washington Park Arboretum, a sprawling 230-acre (93 hectare) park north of downtown.

This summer was fatal for three “significant” trees in the park’s pine collection, including an 85-year-old Japanese red pine infected with fungus left by beetles.

“We’re losing conifers faster than our broad leaf, deciduous ones,” Cope added as he surveyed a towering knobcone pine with half its canopy dead.

Life in a city can be especially hard for a tree, and those challenges are escalating with global warming.

Researchers from France and Australia analyzed the impact of hotter temperatures and less rain on more than 3,100 tree and shrub species in 164 cities across 78 countries. They found about half the trees already were experiencing climate conditions beyond their limits. They also concluded that by 2050 nearly all tree species planted in Australian cities will not be able to survive in urban areas.

“If trends hold, we are going to have a lot of trees die,” said Nicholas Johnson, an arborist for Seattle City Parks. “Under heat, trees get weak—just like people.”

Heat and drought force trees to spend energy surviving that would otherwise go to regeneration, growth or fighting off disease and pests, Johnson said. “Everything outside is trying to eat a tree. The stresses become compounded.”

“It’s not the gradual change that’s going to be the problem, it’s these extreme swings of too much water, too little water, too much wind, and storm intensities are going to cause these rapid changes,” said David Nowak, a retired scientist for the U.S. Forest Service.

Hurricane Katrina in 2005 wiped out about 10% of the trees in New Orleans, said Michael Karam, Director of Parks and Parkways. And in 2021, he added, Hurricane Ida uprooted many new saplings.

“The need to increase the canopy is greater than in years past,” he said. “But the benefits in an urban setting remain the same. On any hot day, go in the shade and you’re reminded that trees are such a benefit to public health and welfare.”

A 2018 study by Nowak found that 25 states had seen significant tree declines earlier that decade.

Cities are familiar with large scale tree loss, but usually one kind of tree is affected, such as birches killed by a borer pest. With climate change, researchers are concerned canopy loss will outpace the rate of newly planted trees reaching maturity, which takes 10 to 20 years.

“A rising rate of tree mortality is coming to a city near you,” said Aaron Ramirez, a tree researcher at Reed College.

Between 2016 and 2021, Seattle lost 1.7% of its tree canopy, about 255 acres (255 hectares) of trees, according to a city report blaming climate change in part. To the south, Portland, Oregon last year saw its first reduction in canopy since it began keeping records two decades ago.

“We’ve spent a lot of time talking about the health of our forest in our natural, rural areas as we’ve seen increased stress from disease, insect infestation, drought—leading to catastrophic wildfires. But the fact is our urban forest, our urban trees, are equally stressed,” said Washington State Commissioner of Public Lands Hillary Franz.

Rows of small black plastic pots bathe in morning sunlight at a maintenance lot for the city of Bellevue, Washington. All hold juvenile giant sequoias, just a few inches tall, that the city is growing for climate resilience.

Sequoias are not native to the Pacific Northwest, but tree managers in this city east of Seattle are planting more of them because they handle drought and pests.

“Once these trees are established, they grow incredibly fast,” said Rick Bailey, supervisor of the city’s forest management program. Native trees still make up about 70% of new trees planted.

Non-native trees have been brought to cities for a long time. Climate change, however, is prompting many arborists to consider increasing them in their city’s arboreal palette—a practice called “assisted migration.”

Still, much research needs to be done to study resilient trees, said Ramirez of Reed College, whose lab found that an Alaska cedar did better in a hot summer than varieties from Oregon and California.

Planting more non-native trees is augmenting something city arborists have learned from decades of tree deaths: diversity in the types and ages of trees planted is key to keeping urban forests alive.

The small Puget Sound city of Burien, Washington, with around 80 employees, added one more in March: their first tree manager. The hiring was part an increased focus on the city’s canopy.

“We just had a discussion about ‘Can we get a water truck? Or something like that?'” said Josh Petter, the new arborist. “Because as we do have these increasing dry spells… I’d rather plant one tree and maintain it really well than plant 10 trees and then not maintain it.”

Costs of maintaining urban forests hit budgets in different ways. A new water truck is also being considered in New Orleans after this dry year. In Bellevue, the city growing giant sequoias, a large chunk of tree maintenance goes toward an increasing number of dead tree removals.

“We are not keeping up with level of maintenance and protection that is needed to make sure we’re not losing them,” said Evan Mallen of Georgia Tech, who said more cities need legislation to protect existing trees.

On a recent rainy week, volunteers for the Seattle parks department planted dozens of trees in a park west of the city. Among them was a western red cedar planted in the shadow of the exposed roots of a fallen oak.

“Life always finds a way,” said Johnson, the department’s arborist. “And in Seattle, people are helping life find a way.”

Why is there a significant decline in sperm count globally including India?