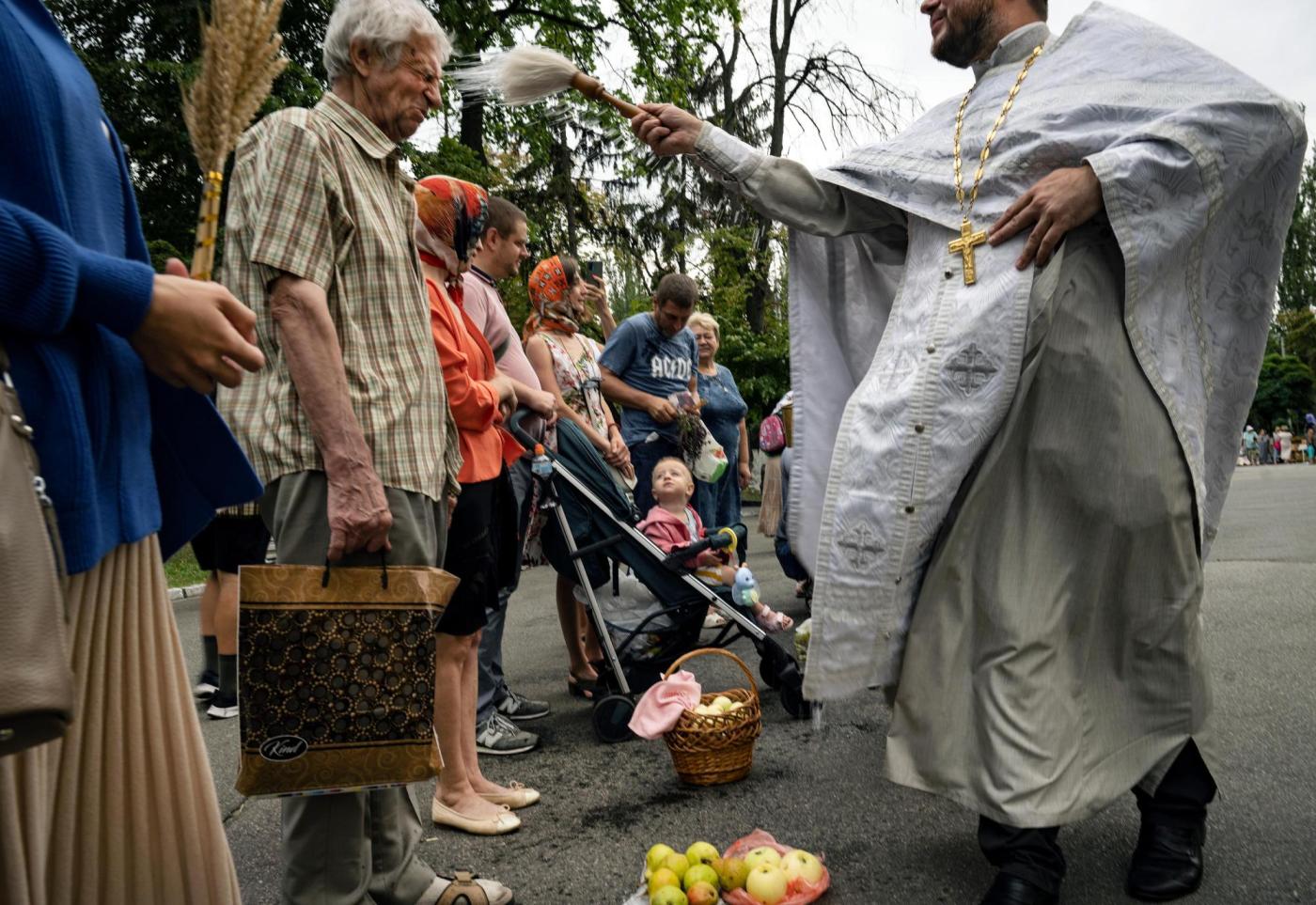 Nearly six months into the war in Ukraine, the Kremlin still refers to its invasion as a “special military operation” while trying to maintain a sense of normalcy at home.

But a series of Ukrainian attacks in Crimea, the Black Sea peninsula that President Vladimir Putin illegally annexed from Ukraine in 2014, is puncturing that narrative.

And as Ukrainian attacks mount in the strategically and symbolically important territory, the damage is beginning to put domestic political pressure on the Kremlin, with criticism and debate about the war increasingly being unleashed on social media and underscoring that even what the Russian government considers to be Russian territory is not safe.

On Saturday, a drone slammed into the headquarters of Russia’s Black Sea Fleet in Crimea, sending a plume of smoke over the port city of Sevastopol. Separately, in western Crimea, Russian troops launched anti-aircraft fire at unidentified targets, the region’s Russian governor said.

Local Russian officials blamed the drone attack on Ukraine and urged residents and beachgoers not to panic, while insisting there had been no injuries and that Russian air defenses were functioning properly.

But as images of anti-aircraft fire streaking through the blue Crimean sky ricocheted through social media, the visceral reality of war was becoming more and more apparent to Russians — many of whom have rallied behind the Kremlin’s line, hammered home in state media, that the “special military operation” to save Ukraine from Nazi domination is going smoothly and according to plan.

“People are beginning to feel that the war is coming to them,” Andrei Kortunov, director general of the Russian International Affairs Council, a research organization close to the Russian government, said in a phone interview. “I think this is serious.”

Ukraine has been engaged in a campaign to target Russian forces on the Crimean Peninsula. The attacks in Crimea appear to have begun in earnest on Aug. 9 with a strike on the Saki air base in which eight fighter jets were destroyed.

“One can literally feel in the air of Crimea that the occupation there is temporary, and Ukraine is returning,” President Volodymyr Zelenskyy of Ukraine said on Saturday in his nightly address to the nation.

Kortunov said the Kremlin is likely to view the Ukrainian attacks not as a military threat but as “irritating,” showing Ukraine’s ability to threaten Russian lives deep behind the front lines. But it remained unclear how — or if — Putin would respond to the attacks, even as pro-Kremlin commentators called for retaliatory strikes.

Russia continues to retain military superiority, and the recent strikes in Crimea haven’t resulted in territorial gains for Ukraine. But they nevertheless appear to have dealt a psychological blow to Russia, undercutting the previous perception of Russian invincibility in a peninsula that exerts a strong hold on the Russian psyche.

Crimea is more than a pivotal military base. A sun-splashed resort and staging ground for Russia’s invasion of Ukraine, Crimea has particular symbolic resonance for Putin, who has called it Russia’s “holy land.”

Crimea is where czars and Politburo chairmen kept vacation homes, and where Putin is said to have built a palatial, multibillion-dollar estate. As home to Russia’s Black Sea Fleet, it also helps Russia exert control over the sea, including a naval blockade that has crippled Ukraine’s economy.

On the social network Telegram, one of Russia’s best-known state television hosts, Vladimir Solovyov, shared a post describing the attacks in Crimea and in Russian regions near the Ukrainian border as “some kind of surrealism.”

“Are we fighting or what are we doing?” the post by a pro-Kremlin military blogger asked. “Tough, cardinal measures must be taken, every day we pay for half-measures with human lives.”

While the military impact of the attacks may be minimal, there are mounting signs that local people are becoming unsettled by them, prompting officials to issue reassurances about their safety.

“I understand that many are worried,” the Russian governor of Sevastopol, Mikhail Razvozhayev, said on his social media page on Saturday. “But that is exactly what the Ukrainian Reich” — a reference to Russia’s false characterization of Ukraine as a Nazi state — “wants to achieve.”

In an interview over a messaging app on Saturday, one resident of Sevastopol said she had never imagined that she would live to see the events of the last six months — both the war and the booms of antiaircraft fire that she said she had heard herself recently. She said that her solution was to try to continue living her life and to avoid the news.

“When you read the news, chaos erupts in your head,” said the woman, Elena, 34, who requested her last name be withheld for her security. “You get the feeling that all around you everything is exploding and burning and that you are in hell.” To bolster national morale or, perhaps, to poke another stick in the Kremlin’s eye, Ukraine staged an act of defiance on Saturday, with captured Russian tanks rolled into downtown Kyiv on flatbed trucks. Collected from battlefields in the east and south of the country, they were placed on the elegant thoroughfare leading to the Maidan, the square at the heart of the pro-Western uprising in 2014.

The disarray in Crimea comes as Russia’s war effort appears stalled on multiple fronts. Fighting in Kherson, in the south, and the Donbas region, in the east, has largely ground to a standstill. A Russian offensive to seize Donetsk province, part of the Donbas, has temporarily halted — partly, U.S. officials said, because Moscow rushed several thousand troops to the south to counter the anticipated Ukrainian offensive there.

In a reflection of the challenges Moscow is facing, the Russian state news media also reported Friday that the Kremlin had replaced the commander of the Black Sea Fleet after a series of setbacks that include the loss of its flagship vessel, Moskva, in April. Ukraine said it had used Neptune missiles to sink the Moskva, a strike Russia dismissed as an onboard accident. It was the biggest warship lost in combat in decades. As Ukraine stoked instability in Russian-controlled Crimea, there finally appeared to be some movement to get international inspectors into the Zaporizhzhia nuclear power plant, Europe’s largest, which is occupied by Russian troops and where anxiety has been growing that shelling in the area could lead to a devastating meltdown.

In a conversation late Friday, Putin told his French counterpart, Emmanuel Macron, that Russia “had reconsidered” its insistence that inspectors from the International Atomic Energy Agency first travel through Russian territory to reach the Zaporizhzhia plant, according to the French presidency.

The IAEA, the United Nations’ nuclear watchdog and monitoring agency, has met with several obstacles in its discussions with Russia and Ukraine to get into the Zaporizhzhia plant since at least June.

Ukraine objected to the idea that the inspectors would enter through Russian-occupied territory, an option that would seem to underscore Russian control of the plant, which provides at least one-fifth of Ukraine’s electricity. The United Nations had significant security concerns about having inspectors travel through the front lines of this bitter war, with so much shelling.

The war also continued to reverberate outside Ukraine, including in ongoing concerns that the Kremlin was using Russia’s vast energy resources as a weapon to punish the West.

The Russian energy giant Gazprom said it would close the taps of its Nord Stream pipeline to Germany from Aug. 31 to Sept. 2 to replace a turbine with the help of its manufacturer, Siemens. Gazprom has said Western sanctions have slowed repairs, reducing gas flows by up to 60%. But Berlin has accused Gazprom of playing politics on Moscow’s behalf.

“The Russian side’s justification is simply a pretext,” Robert Habeck, Germany’s economy minister, told reporters in Berlin in June. “It is obviously the strategy to unsettle and drive up prices.”

This article originally appeared in The New York Times.