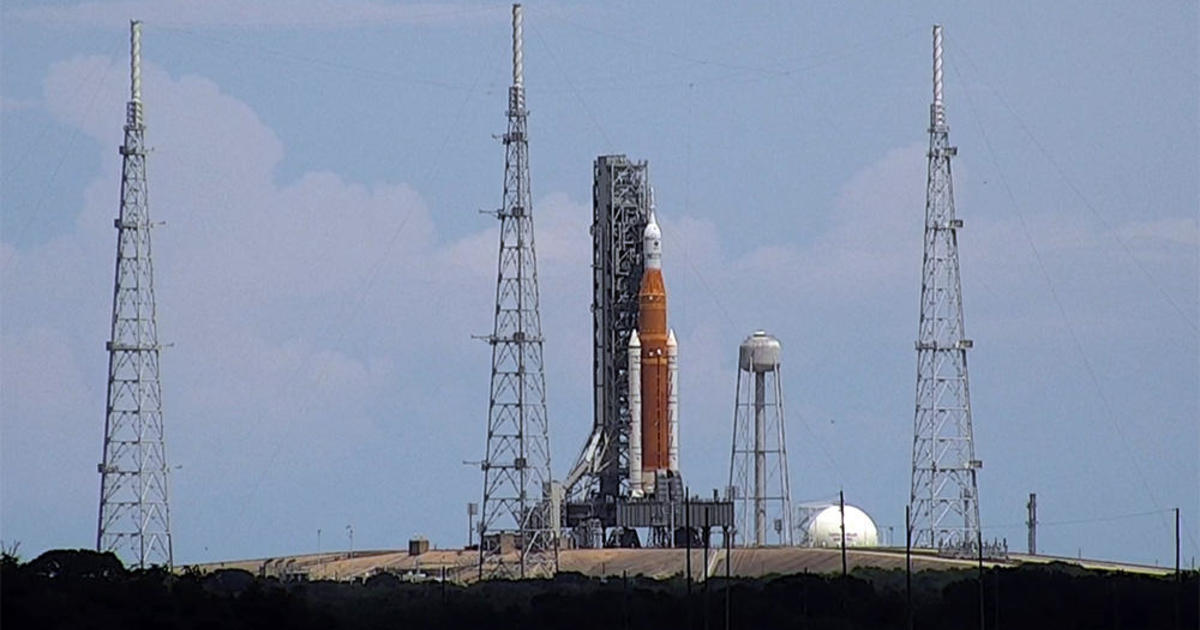 Despite five lightning “events” Saturday at pad 39B, engineers were cleared to press ahead with preparations Sunday for the planned launch of NASA’s huge Space Launch System moon rocket Monday on a critical flight to send an unpiloted Orion capsule on a trip around the moon.

Engineers spent the day Sunday readying the rocket, the most powerful ever built by NASA, for the start of fueling just after midnight when 750,000 gallons of supercold liquid oxygen and hydrogen rocket fuel will be pumped aboard the 322-foot-tall SLS.

If all goes well, the four shuttle heritage engines at the base of the SLS core stage, along with two strap-on solid rocket boosters, will ignite at 8:33 a.m. EDT, pushing the 5.75-million-pound rocket away from launch complex 39B at the Kennedy Space Center.

Forecasters predicted an 80% chance of acceptable weather at the opening of the two-hour launch window, decreasing to 60% or so later in the morning.

While the primary goal of the 42-day mission is to test the Orion capsule’s heat shield at the end of the flight, the SLS booster has to send the spacecraft on its way, boosting it into Earth orbit and then sending it off on a five-day trajectory to the moon.

Getting the Space Launch System rocket ready for its maiden flight has been a struggle, with a series of ground-system problems and propellant leaks that triggered multiple delays. But engineers say the complex rocket is finally ready to go.

“Our team right now is super excited, and we are prepared for anything (that’s thrown) at us,” said NASA Test Director Jeff Spaulding. “The four (practice countdowns) we’ve done in the past really, I think, prepared us for the moment we’re at now.

“We are excited. The vehicle is going to be ready. It’s ready right now, it looks great to proceed with this inaugural launch of the Artemis program.”

One question mark remains going into the final hours of the countdown: the status of a 4-inch liquid hydrogen quick-disconnect fitting that leaked during the most recent fueling test on June 20.

Engineers repaired the fitting, but the work was done at room temperature and they won’t know for sure it’s leak free until supercold liquid hydrogen begins flowing through it starting around 3:30 a.m. Another test at 5:43 a.m. will subject the plumbing to higher pressures as a final check.

An unrelated issue cropped up Saturday a few hours after the countdown began when storms rolled across Cape Canaveral and lightning bolts hit two of the three 600-foot-tall towers protecting pad 39B.

Spaulding said Sunday five electrical “events” from multiple strikes were detected by launch pad sensors, prompting a check of the rocket’s electrical systems to make sure nothing was really affected.

“We’ve been evaluating those through yesterday and through last night, and everything to date … looks very good,” Spaulding said. “We have a threshold that we look at to see what the magnitude of these strikes are. And we did not meet that criteria to have to do intensive or invasive retest.”

Bill Harwood has been covering the U.S. space program full-time since 1984, first as Cape Canaveral bureau chief for United Press International and now as a consultant for CBS News. He covered 129 space shuttle missions, every interplanetary flight since Voyager 2’s flyby of Neptune and scores of commercial and military launches. Based at the Kennedy Space Center in Florida, Harwood is a devoted amateur astronomer and co-author of “Comm Check: The Final Flight of Shuttle Columbia.”

Denial of responsibility! My droll is an automatic aggregator of the all world’s media. In each content, the hyperlink to the primary source is specified. All trademarks belong to their rightful owners, all materials to their authors. If you are the owner of the content and do not want us to publish your materials, please contact us by email – [email protected]. The content will be deleted within 24 hours.
Artemis programNASA
0
Share

A larger, flat screen Apple Watch Pro is rumored to be arriving in September