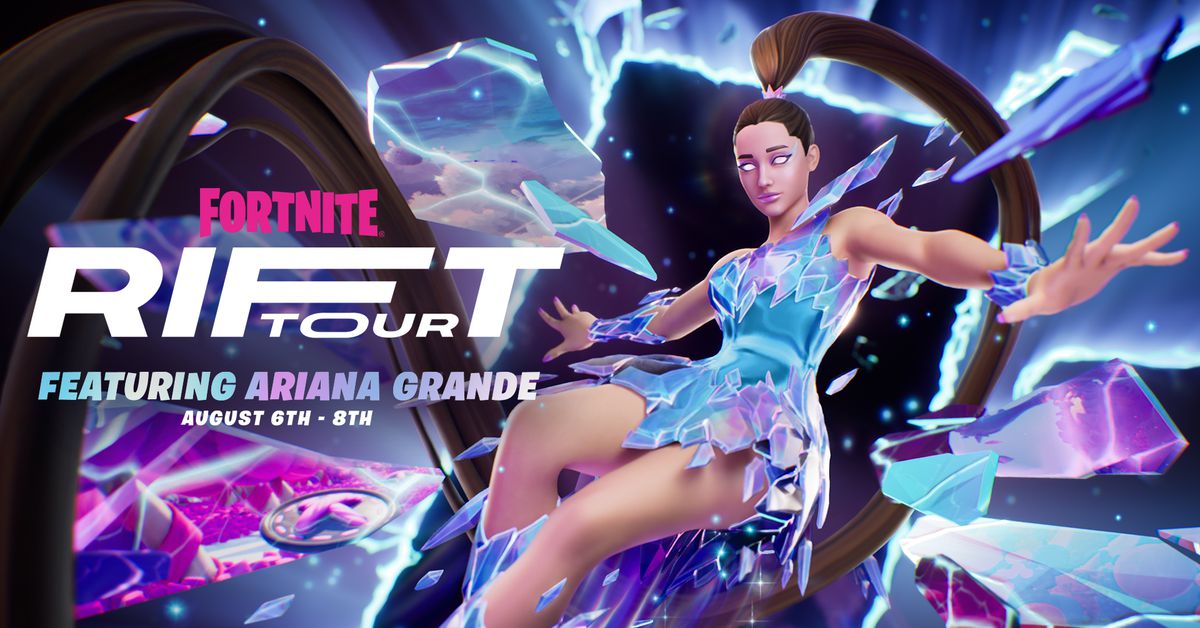 Last week, Epic Games teased that a “record-breaking superstar” would be performing in Fortnite’s upcoming Rift Tour concert series, and now we know that the mystery performer is none other than Ariana Grande.

The five-show concert series kicks off August 6th at 6PM ET, and shows will run through August 8th. (You can find the full schedule here.) Epic recommends being ready in-game 60 minutes before any of the performances so that you can jump into the Rift Tour playlist when it goes live 30 minutes ahead of showtime. Fortnite events have filled up in the past — I personally missed Fortnite’s “The Device” event in-game because I signed on too late — so I’d recommend showing up early to the Rift Tour shows just in case.

As for what you can expect from the shows? “Building on and incorporating other celebrated Fortnite moments, the Rift Tour will begin with experiences that pair popular tracks with moments based on elements from the game,” according to Epic Games. “Players will be able to travel side by side with their friends on a journey to magical new realities where Fortnite and Ariana collide.

Epic will also be selling a skin based on Grande as part of its Icon Series, which features real-world celebrities like LeBron James and Tyler “Ninja” Blevins. Grande’s skin will go on sale August 4th at 8PM ET, meaning you can show up to Grande’s concert dressed as Grande, and you can get a preview of the skin and a backpack based on her actual pet pig, Piggy Smallz, in this teaser video:

If you attend the concert, you’ll also get a special umbrella glider. Players who subscribe to the monthly Fortnite Crew subscription will get some exclusive bonuses for attending, including a rainbow variant of the concert umbrella.

Fortnite’s past concerts have been massively successful — more than 10 million people watched Marshmello’s in-game concert in February 2019 and more than 12 million people attended Travis Scott’s surreal Fortnite performance in April 2020. It seems likely that Epic will be aiming to up the spectacle with this latest concert, and we’ll have to wait and see what the combination Grande’s performance inside of Fortnite’s currently alien-themed world could bring.

Grande’s performance was rumored in July, and documents unearthed as part of Epic’s case against Apple also revealed that Epic was planning a concert with the megastar. The event seems to have been in the works for quite some time — according to a June 2020 document from the case, a Grande concert was in the works for that October. At the time, a J Balvin concert was set for that September, which ended up happening a month later as part of the game’s Halloween event, while a still-unannounced Lady Gaga concert was planned for that December.

Trinamool Congress may use ‘Khela Hobe’ campaign in Tripura too

BCCI to have new CEO, interim CEO Amin can apply too

Galaxy Book 3 leak spills the beans on the latest Samsung…

Play as Miku in the Alice Fiction Hatsune Miku Collab