Apple’s iPhone 14 gets a Plus size, improved cameras; starts at $799 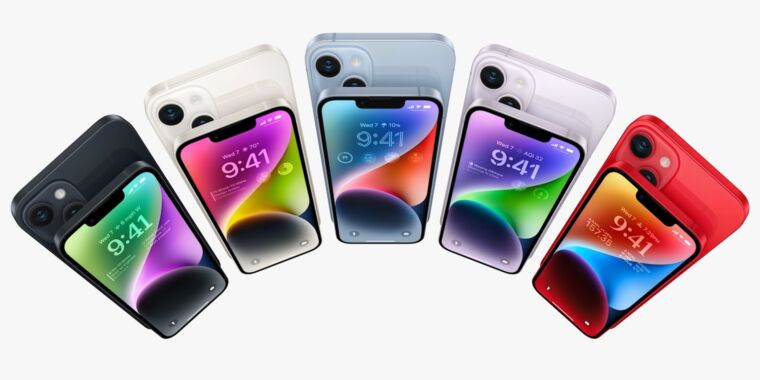 Like its predecessor, the basic iPhone 14 has a 6.1-inch OLED screen. But missing is the iPhone mini, the smaller one-handed model that was present in Apple’s lineup for the previous two years. That phone didn’t sell all that well, so the majority of consumers have spoken: Big phones are the way to go.

If you were hoping for a big year-over-year specs bump, you’ll be disappointed. Both iPhone 14 models have Apple’s A15 Bionic system-on-a-chip, the exact same chip found in last year’s model. As a result, big performance improvements are probably not in the cards here. (That said, some early leaks suggested these new phones have more RAM than their 2021 counterparts.) The chip has five GPU cores, like last year’s iPhone Pro, six CPU cores, including two high-performance cores and four efficiency ones, and a 16-core neural processing unit.

Apart from the new larger Plus size, the iPhone 14 looks virtually the same as what we saw last year, including a screen notch for the front-facing sensors, and so on. Apple did point to an updated internal design, however, for improved thermals.

Apple also claims the new iPhone 14 will have the best battery life ever in an iPhone.

And the tech giant announced that iPhone 14s in the US will not use a SIM card tray. They will rely on eSIMs only.

Most of the biggest updates come from the cameras. There’s a new 12MP main camera with a larger sensor and larger pixels at 1.9 microns. It also has a faster aperture (f/1.5) for better motion freezing, as per Apple.

The new TrueDepth front-facing camera, meanwhile, has a faster f/1.9 aperture, plus, for the first time, autofocus. It uses a hybrid system for faster focusing, including in low-light situations, for improved selfies and group shots, Apple said.

Like earlier iPhones, the iPhone 14 will use Deep Fusion, a feature that uses machine learning to unite multiple frames into one image. But with the new iPhone 14, Deep Fusion will be introduced to uncompressed images earlier in the imaging process than before. Apple claims this will bring a greater range of brighter colors, improved visibility of details, like textures, and better low-light performance.

The upcoming smartphones also introduce some safety features to the iPhone that mirror similar ones found in the Apple Watch Series 8 and SE announced today. The iPhone 14 series uses a new gyroscope and accelerometer and has crash detection, for example.

Apple is also introducing Emergency SOS, which works via satellite and can contact emergency services as needed.

Emergency SOS uses custom components and software so that iPhone 14 antennas can connect to satellites, even as the satellites move. Apple achieved this by creating a short-text compression algorithm to reduce the size of the message, so it can send in under 15 seconds to a few minutes, depending on sky conditions. Apple said that users will be offered multiple-choice dialogues that they can send to relay centers with emergency service providers that they can talk to, though it’s unclear where exactly those are.

The new Emergency SOS service will launch in the US and Canada in November.

Apple’s September product event is ongoing, and we’ll update this post with more details as we have them. You can follow along with our live coverage here.

Ars Technica may earn compensation for sales from links on this post through affiliate programs.