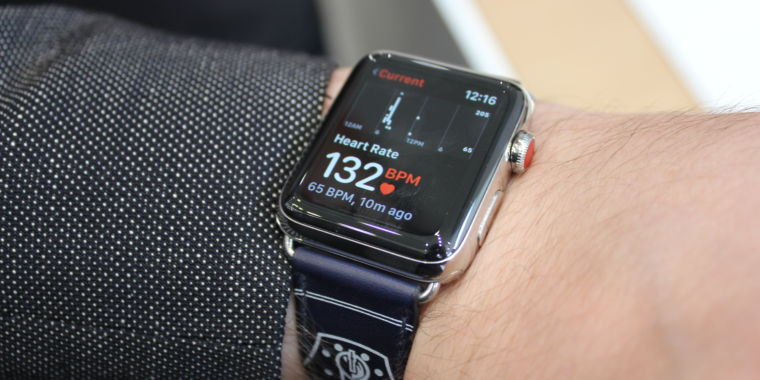 Like a cat trying to hide its pain, Apple’s Series 3 Watch quietly disappeared Wednesday afternoon following announcements of the company’s newest Apple Watches, including an ultra-premium rugged Apple Watch Ultra. There wasn’t room in Apple’s lineup for the S3, nor was there likely room on the S3 for WatchOS 9. Series 3 would have been 5 years old on September 22.

The Series 3 stuck around in Apple’s lineup for a strangely long period, outlasting every other Series release except 7 (which it really might have tied, depending on how you time these things). It was the “discount” Apple Watch, even if it was only $30-$50 less than the Apple Watch SE at times and often far more expensive than third-party refurbished Apple Watches. In July, Ars Technica’s Corey Gaskin wrote in an Apple Watch buyers’ guide that the Series 3 was “more like a little toy at this point,” and was only—maybe—worth it for putting on kids who don’t notice their phone ringing.

As with most lives, the Series 3’s had a different, brighter look at the start. It was the first Apple Watch with an (activated) altimeter for stair-climb and elevation tracking, spoken responses from Siri, and most importantly, LTE connectivity, allowing you to use it without having a phone nearby for Bluetooth tethering. This was seen as a boon to runners, cyclists, and anybody seeking to loosen the umbilical connection they felt to their phone. It could be, Ars wrote at the time, the Watch’s watershed moment.

At least when it worked. Problems with connectivity plagued Ars’ reviewer of the Series 3, along with the peculiar red dot Apple placed on the LTE models’ crown. The additional $10 per month you paid a carrier for an eSIM on the Watch made those issues feel even more unfair. It felt faster than the Series 2, though, and WatchOS updates would eventually smooth out some of these problems.

Had Series 3 gracefully retired when Series 4 showed up, it would have held onto a decent reputation as a notable first. The same would have been true for the Apple Watch SE’s debut in September 2020. The Watch SE, like the iPhone SE, pieced together parts from models Apple was already manufacturing into a budget-minded offering. The SE cost $280, notably less than the concurrent Series 6 at $399. But the Series 3 elected to keep serving in senior status, costing $199 and getting OS updates.

Those OS updates were not easy. The Wi-Fi Series 3 has only 8GB of storage. As Apple Watches grew to do more things, the OS took up more room and tested the limits of the Series 3’s capacity. As detailed by The Verge, any update to WatchOS, even a 0.1 security fix, required wiping and resetting the Series 3 at least twice, slipping the new code between annoyingly long processes.

In the way relatives talk in hushed tones around ailing family, Apple had previously announced that WatchOS 9 would be available on the Series 4 and later, without saying anything definitive about its future. When the Apple Store updated after Apple’s event today, the Series 3 was no longer with us.

Why Do Our Minds Wander? | Science