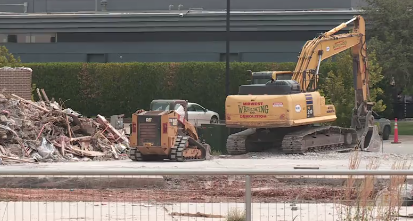 OKLAHOMA CITY (KFOR) – It’s been a long time coming, but debris clean up from Oklahoma City’s largest commercial fire has started. Nearby residents have been waiting for this for a while. The Canton Apartment Complex which burned down in February leaving a large pile for everyone to see.

“It’s great finally seeing progress. They’ve really worked hard over the last two weeks. They’ve had two trucks here consistently working. And as you can see, the pile is about, I’m going to say 50 to 60% cleared away. So, we’re very pleased with the progress,” said Melissa Hoehn, Glenbrook neighborhood resident.

Melissa Hoehn, a Glenbrook neighborhood resident is also concerned on how this “eye sore” could affect home value.

“It could definitely affect our home values. I would think when people are trying to show their homes and show the neighborhood surrounding the area, it was a little bit tough and worrisome that it would affect all of our home values. So hopefully now we can get back on track and the city will look like it’s supposed to,” said Hoehn.

As for what’s next for this location, Joe Blake, the vice president of the Glenbrook property owner’s association told News 4 he believes the developers are planning to rebuild.

“Well, we’re hopeful developers will come up with a good solution. We’ve heard they’re going to rebuild, and we hope it works out for them too,” said Joe Blake, vice president of the Glenbrook property owner’s association.

Jessie Ann Wallentine, who is in charge of beautification in the Glenbrook neighborhood said she’s been disappointed with the slow progress. She’s also worried about safety.

“Oh, is that a disaster! I mean, we tried so hard to keep everything that we have, you know, straight and looking nice. And then we’ve had this, you know, all the trash over here and no one taking care of it,” said Jessie Ann Wallentine, in charge of beautification in the Glenbrook neighborhood.

Wallentine even travels a different route just to avoid looking at it.

“I go out to 63rd so I don’t have to look at it. I mean, there are three different exits from 63rd. Anything to not have to go right in and look at all the trash,” said Wallentine.

Wallentine told KFOR, they have always been told the area was going to hold retail and restaurant businesses, not apartment complexes.

“We’ve had a hard time having apartment houses been built here emotionally because you never know who’s going to move in. And it just causes a lot more traffic. And we had always been told that it was going to be more commercial things and restaurants and kind of a walking area that was a green area,” said Wallentine.

KFOR was told the cleanup effort couldn’t start until the investigation into what started the fire was complete.

A report released in the beginning of July revealed the flames were accidentally started by an electrical issue.

Humphrey’s Capital was the lead investor on the apartment complex project.

We reached out to Humphrey’s for a comment, but it is Saturday, and they are closed.  If we hear back from them after the weekend, we’ll be sure to update that right here.