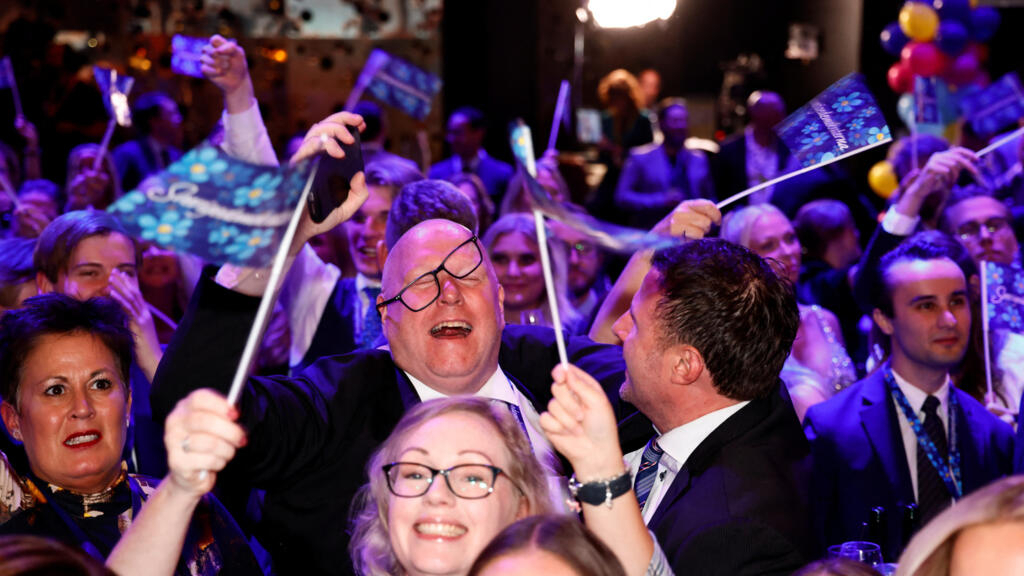 “Right now it looks like there will be a change of power,” Jimmie Akesson said in a speech to party members.

Sweden’s right bloc inched into the narrowest of leads with around three-quarters of votes counted after Sunday’s general election, with results pointing to a new government after eight years of Social Democrat rule.

The figures show the Moderates, Sweden Democrats, Christian Democrats and Liberals winning 175 seats in the 349-seat parliament against 174 for the centre-left.

In further evidence of a shift to the right, the anti-immigration Sweden Democrats are set to overtake the Moderates as Sweden’s second biggest party and the biggest in the opposition – a historic shift in a country that has long prided itself on tolerance and openness.

“Now, for the first time, we have a real chance, a real possibility to … be, not just an opposition party, but to sit in and be an active part in a new government that takes politics in a completely new direction,” Sweden Democrat party secretary Richard Jomshof told public broadcaster SVT.

With overseas and some postal votes yet to be counted and the margin between the two blocs wafer-thin, the result could still change and may not be clear until the middle of the week.

Earlier an exit survey by public broadcaster SVT gave Andersson’s centre-left bloc 49.8% of the votes against 49.2% for the opposition right-wing parties.

Opinion polls have shown the race as a virtual dead heat throughout much of the campaign and exit polls can differ from the final result. A TV4 poll on election day also showed the centre-left commanding a narrow lead.

Campaigning had seen parties battle to be the toughest on gang crime, after a steady rise in shootings that has unnerved voters, while surging inflation and the energy crisis following the invasion of Ukraine have increasingly taken centre-stage.

The SVT exit poll showed Jimmie Akesson’s Sweden Democrats, which demand that asylum immigration be cut to virtually zero, with 20.5% of the vote, up from 17.5% at the previous election.

While law and order issues are home turf for the right, gathering economic clouds as households and companies face sky-high power prices had been seen boosting Prime Minister Magdalena Andersson, viewed as a safe pair of hands and more popular than her party.

“I have voted for a Sweden where we continue to build on our strengths. Our ability to tackle society’s problems together, form a sense of community and respect each other,” Andersson said after voting in a Stockholm suburb.

Andersson was finance minister for many years before becoming Sweden’s first female prime minister a year ago. Her main rival, Moderates leader Ulf Kristersson, had cast himself as the only candidate who could unite the right and unseat her.

Kristersson has spent years deepening ties with the Sweden Democrats, an anti-immigration party with white supremacists among its founders. Initially shunned by all the other parties, the Sweden Democrats are now increasingly part of the mainstream right.

The prospect the Sweden Democrats having a say in government policy or joining the cabinet, has divided voters.

The strong result for the Sweden Democrats fit a pattern of gains for the anti-immigration right wing across Europe where Italy looks poised to elect a conservative bloc including Giorgia Meloni’s Brothers of Italy (FdI) and Matteo Salvini’s League later this month. Read full story

“I have voted for a change in power,” said Jorgen Hellstrom 47, a small business owner, as he voted near parliament. “Taxes need to come down by quite a bit and we need to sort out crime. The last eight years have gone in the wrong direction.”

Kristersson had said he would seek to form a government with the small Christian Democrats and, possibly, the Liberals, and only rely on Sweden Democrat support in parliament. But it may be hard for him to snub a party that is set to be bigger than his own.

Whichever bloc wins, negotiations to form a government in a polarised and emotionally-charged political landscape are likely to be long and difficult.

Andersson will need to get support from the Centre Party and the Left, who are ideological opposites, and the Green Party as well, if she wants a second term as prime minister.