Another Example Of Woke Marvel/Disney Storytelling In X-Terminators #3 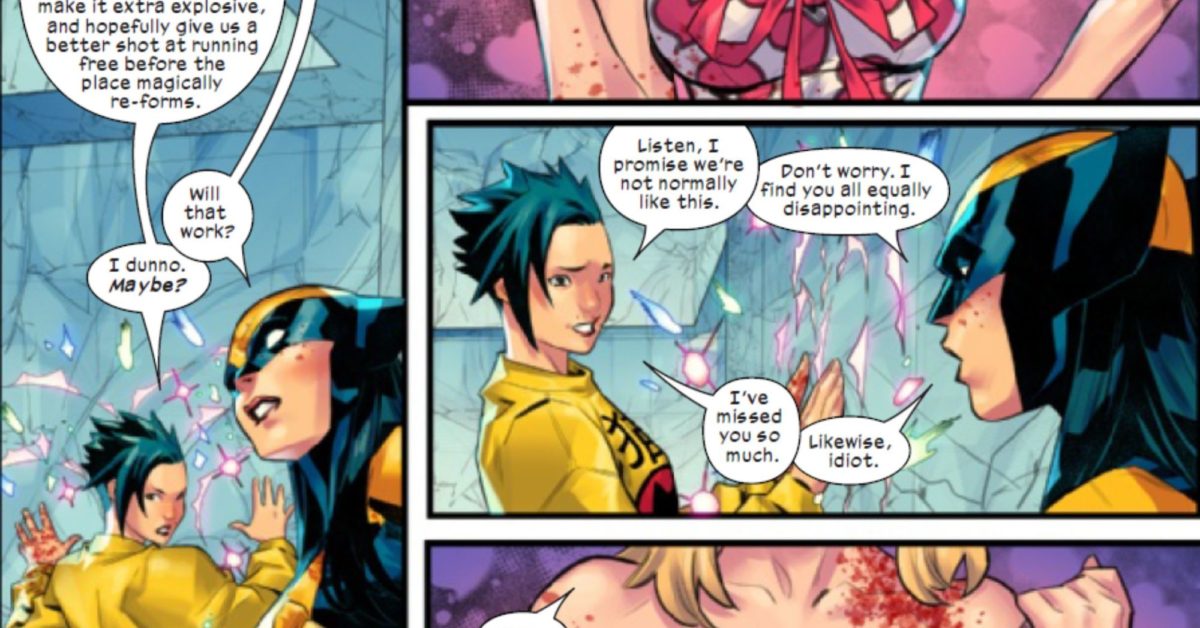 This week’s X-Terminators #3  – the only Marvel X-Men comic book out this week, in a fifth week schedule from Marvel Comics that, along with DC Comics, leaves things a little dry this week, which also gives readers a bigger chance to experiment. Something I think Bad Idea Comics are counting upon. And with X-Termimators‘ reader warning getting a little more explicit than usual. They put this kind of thing before The Muppet Show now. Honestly.

As Jubilee and Boom Boom explore the nature of good taste in a comic book that is desperately trying to have none. While also having a female Wolverine. Honestly, can’t men have anything to themselves? We just want a hairy muscled male Wolverine who is just for us, and no, there is nothing homo-erotic about that, why do you ask?

Because in these days of “wokeMarvel”, you can’t have superhero comic books in which the women are partially undressed and making jokes about their bodies, even objectifying themselves and each other. The fun police have had their say, and in a Disney-owned comic book like this, you could never have women X-Men characters discussing, well…

Look, I am sure they are just discussing Dazzler’s fruit display. Actually no, that sounds ruder, I wouldn’t want to suggest that anyone, let alone Tabitha,is putting on a display, that’s just a misogynist trope that plays into the male gaze…

Or maybe, just like everyone else on the internet, I have no idea what I am talking about. Remind me, what’s Tabitha’s superhero name again? It slips my mind.

What with X-Terminators from Marvel and Young Justice by Meghan Fitzmartin and Laura Braga at DC Comics, there have been a few breast-based assaults of late in superhero comics. And all from the women. Gentlemen, you are letting the side down…

X-TERMINATORS #3 (OF 5)
MARVEL COMICS
SEP220996
(W) Leah Williams (A) Carlos E. Gomez (CA) Federico Vicentini
VAMPIRES, VIOLENCE AND VENGEANCE!
Does it count as killing a man when the man in question is already undead? This problem is one the lovely ladies of bombs and blades are going to need to wrestle with as they brutally separate bloodsuckers’ heads from their bodies! Just when you thought the night couldn’t get more bonkers… PARENTAL ADVISORYIn Shops: Nov 30, 2022 SRP: $3.99

Loot boxes cause “financial and emotional harm” to children

Janhvi Kapoor leaves us awestruck in a saree and nose ring.…

“Choose the best bowlers for the conditions”

How to watch the WWE Royal Rumble 2023