Amid ‘security concerns,’ no details on Newsom trip – Chico Enterprise-Record 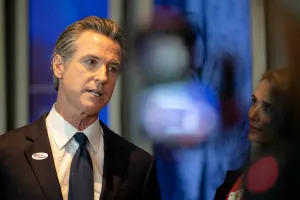 Gov. Gavin Newsom left California on Sunday to travel with his family for the Thanksgiving holiday, but due to security concerns, the trip location won’t be revealed until after he returns next weekend, according to his office.

The California Highway Patrol, which handles the governor’s security, made the safety determination, according to Newsom’s office. The CHP did not respond to a request for comment Sunday.

Newsom’s out-of-state travels have come under heightened scrutiny following his summer trip to visit his in-laws in Montana, one of 23 states to which California has banned state-funded travel due to policies it deems discriminatory to LGBTQ+ people. Although Newsom paid for the trip with personal funds, he seems to have been accompanied by a taxpayer-funded security detail — which his office and the CHP have suggested is a permitted exemption under the travel ban.

The nature of the security concerns is unclear, though Newsom told me in an interview last year, “You guys, lovingly, don’t have any sense of the threats.” Nevertheless, when Newsom traveled for Thanksgiving last year, his office shared in advance that he would be in Mexico.

However, both Newsom’s profile and that of his wife, Jennifer Siebel Newsom, have grown significantly in the past year. While Newsom has picked fights with GOP Florida Gov. Ron DeSantis and burnished his national image in what some have speculated is groundwork for a potential presidential campaign, Siebel Newsom last week testified in Harvey Weinstein’s high-profile Los Angeles sexual assault trial, alleging that the disgraced movie producer raped her in 2005. Weinstein has denied the allegation.

Newsom departed for his Thanksgiving trip two days after meeting with city and county officials in Sacramento to discuss developing more ambitious plans to reduce street homelessness. The upshot: Newsom will release most of the $1 billion in one-time homelessness funding that he blocked just two weeks ago, as long as applicants pledge to craft more aggressive blueprints for the next round of funding, CalMatters’ Manuela Tobias reports.

Nevertheless, local officials warned their ability to mitigate homelessness will be constrained without a permanent stream of state money.

“It’s only up from here, I promise”