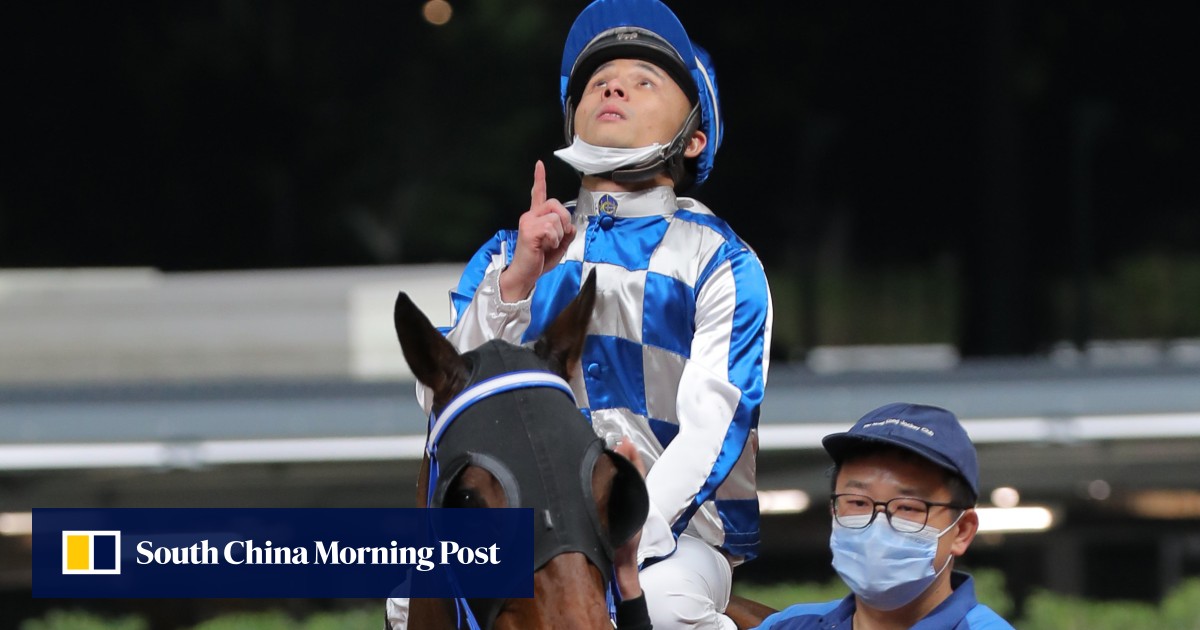 Alfred Chan Ka-hei made his only ride a winning one at Happy Valley on Wednesday night and the jockey was quick to remember his grandma, who died on Sunday.

After booting Sugar Sugar to victory in the second section of the Class Four Club Handicap (1,200m), Chan admitted to feeling mixed emotions after a sombre few days.

“I’m happy and sad. I’m happy he can do it because last Sunday my grandma passed away, which is really sad,” the jockey said.

“I came here for one ride and the horse did it for me and he did it for the stable. I’m grateful we can win again, and hopefully, my grandma can rest in peace.”

Chan has struck up a good relationship with the Caspar Fownes-trained Sugar Sugar this season, winning twice from three starts aboard a galloper who has provided the jockey with two of his three successes this term.

“If we didn’t miss the kick last start, we possibly could have won that as well. Because he missed the kick badly last time, I said to Mr Fownes to maybe just school him in the gates,” Chan said.

“After the last race, he had two jump outs and one trial straight away and those three times we were very happy. As long as everyone leaves him alone in the gates, he flies out the gates no problem.

“I want to say thanks to Caspar because I didn’t ride him well last start, but he still kept me on him. I really appreciate it.”

Positioned one off the rail forward of midfield by Chan after jumping cleanly from barrier four, Sugar Sugar travelled nicely in the run and had enough in the tank to deliver a victory that will see him graduate into Class Three company.

Fownes was pleased to see Chan among the winners for the first time since December 4, and thrilled to see his progressive four-year-old deliver on his promise.

“I’m very happy for Alfie. He deserved that. We’ve been working hard on that horse just to get him out of the gates because he’s been a bit naughty,” Fownes said.

“But he was good today, his focus was there and he gave him a nice ride. He got the job done, and now obviously, he’s going to go up in class and down in weight. It’s always a bit of a test, but I don’t see any reason why he can’t continue to be competitive.”

Sugar Sugar’s victory completed a double for Fownes after the earlier victory of Daily Beauty in the first section of the Class Five Murray Handicap (1,650m), with the trainer moving to 24 winners for the campaign and within five of premiership leader Frankie Lor Fu-chuen.

Elsewhere on Wednesday night, Francis Lui Kin-wai also strengthened his position in the title race, moving to 26 victories for the term thanks to victories from London Luckystar and Rising From Ashes.

Lyle Hewitson was in the saddle for Rising From Ashes’ success, with the South African jockey’s first winner for veteran trainer Lui marking the second leg of a double that also included the victory of Kowloon Great.

“It couldn’t have gone much better,” Hewitson said of his win aboard Rising From Ashes.

“I decided to wait for a bit of luck, and I got my split through them. He’s a horse who wants a bit of room, so I made sure I switched out once I got through and he hit the line really well. I didn’t even use the stick from behind.”

Runaway championship leader Zac Purton was the other rider to deal in multiples at the 37th meeting of the season, with wins aboard Flying On The Turf and Star Contact moving the five-time champion jockey to 78 winners.

Tips To Keep Your Nails Healthy This Winter