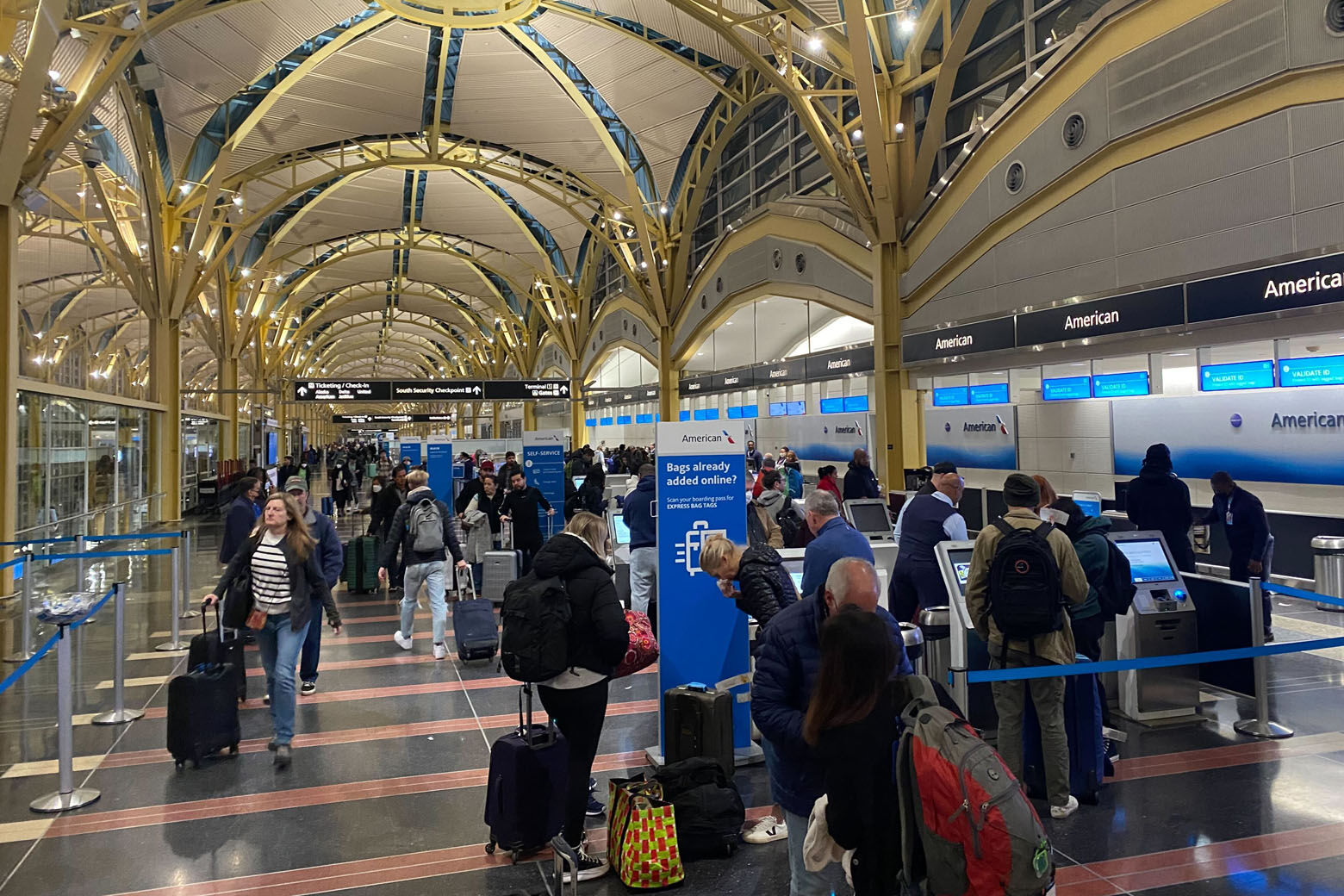 The Thanksgiving travel getaway was off to a mostly smooth start Wednesday, despite long security lines Wednesday morning at one of the D.C. area’s busiest airports.

The Thanksgiving travel getaway was off to a mostly smooth start Wednesday, despite long security lines Wednesday morning at one of the D.C. area’s busiest airports.

Reagan National Airport saw a steady stream of travelers Wednesday morning with, at times, long lines to go through security screening and to check bags.

WTOP’s Luke Lukert was at the airport assessing the crowds and talking with travelers.

“Definitely got a little anxious that there’d be more crowds, so I got the early flight and got here a few hours early. But things seem to be pretty good today,” said one traveler, who only gave his first name, Joseph.

The Transportation Security Administration recommends holiday travelers get to the airport two hours before scheduled domestic flights and three hours before international flights.

About 2.5 million people are expected to fly Wednesday nationwide, according to the TSA. Overall air travel is projected to be about 8% higher than 2021 — nearly at pre-pandemic levels, according to AAA.

With placid weather expected up and down the Mid-Atlantic, a quick scan of online airport departure boards indicate things to be running smoothly so far, with few delayed flights at Reagan, Dulles International and Baltimore-Washington International airports.

Heading into Thanksgiving, there’s usually not a one-day holiday rush.

“People trickle to their destination” throughout the week, said TSA spokeswoman Lisa Farbstein.

But if you’re planning to fly on the Sunday following Thanksgiving, expect plenty of company. “Most people return home on Sunday,” Farbstein said.

Not everyone is bemoaning the stress of holiday airport crowds.

“I’m glad everyone’s getting back out and traveling. It’s nice to be back out in the airports and back up in the skies again,” Robby Veronesi told WTOP. He was heading to New York to spend the holiday with family. “I missed being up there.”

You’ll be able to save time if you don’t have to check a bag. But if you’re planning to bring some Thanksgiving fixings in your carry-on baggage, be warned: If you can spill, spray, pump or pour it — think cranberry sauce, gravy, wine jelly — you’ll have to dump it before going through security if it’s more than 3.4 ounces.

See more do’s and dont’s for what to bring here.

Also here’s a tip for going through security: “Don’t wait until you get to the conveyor belt to start unloading your pockets. Take them out in the line. Put them in your carry-on bag,” Farbstein said.

Planning to drive for your Thanksgiving travel plans? Your best window of opportunity has likely already passed.

Transportation authorities in Virginia and Maryland both say the best time to hit the roads to avoid congestion was by early Wednesday. However, if you still have some traveling to do, Thanksgiving Day usually sees lighter-than-normal traffic.

Here’s how to access free data while travelling to the U.S.