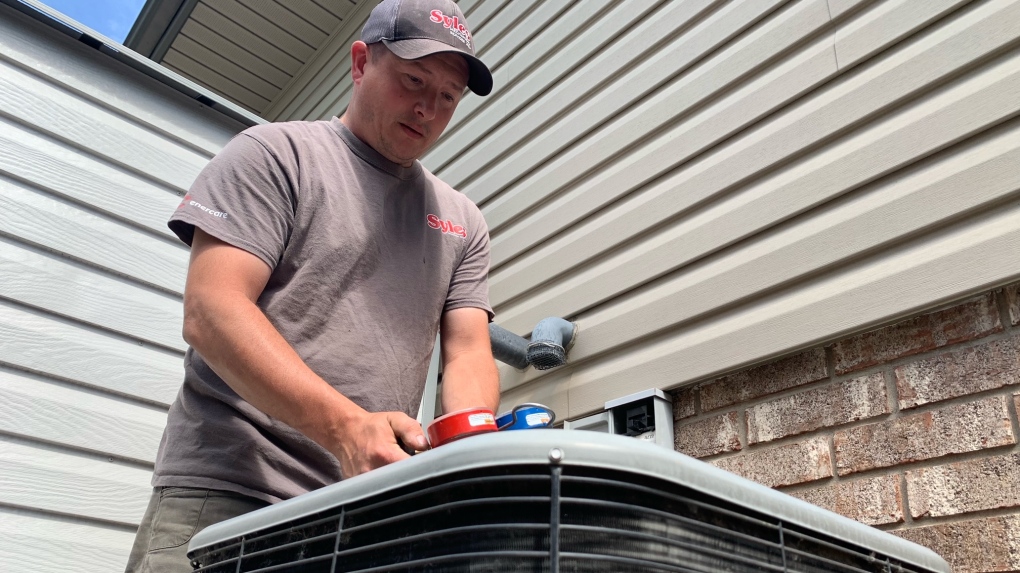 Tecumseh homeowner Gary Remillong woke up to a hot house Wednesday morning, just one day after a new heat record was set in the region.

More high temperatures were forecasted for the first full day of summer, prompting Remillong to have someone check it out.

“It’s always like that when it’s nice and cool, nothing ever breaks down,” Remillong explained. “But as soon as the heat comes, well we’re stuck with it.”

Remillong was relieved to learn a simple repair was all that was required after calling Syles Mechanical Services.

“Without air conditioning, I don’t think we could survive down here in Windsor,” he added. “They’ve always been very good at getting out rather quickly and taking care of us.”

Staff at the heating and cooling company said they’re fielding 60 calls per day as another heatwave hit the area this week, believing a combination of heat and pollen is forcing many air conditioners to struggle.

“It’s been extremely busy,” said HVAC service technician Allan St. Denis. “Because of the heat, a lot of the air conditioners are working overtime and they’re just they’re being strained.”

“It’s not too bad yet,” said St. Denis. “I think it’s going to get worse, but yeah, we’re doing the best we can. We’re working pretty hard these days.”

Crews have been working around the clock according to manager Grant Higginbottom who told CTV News he didn’t expect a slowdown anytime soon.

“We’ve been so busy right from the first day of the heat,” Higginbottom said.

“Everybody’s a little understaffed right now in the whole city so it’s tough to get there in the next hour, but we’ll get there.”

“It’s unbelievable because we’ve been running so hard,” he said. “I mean, it’s going stay like this for the next month and then hopefully in August it gets a little cool.”

Meantime, Environment Canada warning preparedness meteorologist Geoff Coulson said higher than average temperatures could bounce back and forth for the rest of June, suggesting July will continue a warmer than normal trend.

“It certainly looks like it could be a summer with more than a few heat warnings going out,” Coulson explained. “Overall, the forecast at this point for July is to be somewhat warmer than normal.”

Coulson noted Windsor is the Humidex Capital of Canada and that extended periods of heat can produce dangerous storms fast.

“This is Lightning Safety Awareness Week. We aren’t expecting any real thunderstorm activity for the next couple of days in the Windsor area. But it is important to note as we get into the weekend, we could be seeing some thunderstorm activity and that the lightning safety rule says that if you can hear the thunder, that’s the time to get into the best shelter that you can find. And the second part of the rule, stay in that shelter that you found for a full 30 minutes after the last rumble of thunder to let that storm move well away from their location.”

Ford to kill off the Focus in shift towards EVs